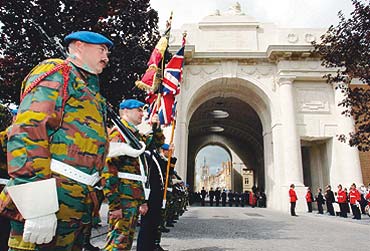 Sepoy Teja Singh of the 34th Sikh Pioneers and Bugler Zaman Ali or for that matter Mal Singh and Buta Singh—all of the 40th Pathans—enlisted for a regular pay cheque. Hari Singh of the 11th Rajputs, Hasan Gul and Mahtaba of the 129th Balochis and thousands of others died for their colonial masters. The names of hundreds of Indian sepoys, subedars, buglers and naiks are etched in the cold, white stone of Menin Gate but thousands more are not. They are still missing. Lost somewhere out there in the Flemish mud.

Standing under Menin Gate in Ypres, also known as Ieper, amid the killing fields of Flanders in Belgium—the infamous western front where 2,50,000 were slain in four battles near the start of the war in 1914—is perfectly chilling. And moving. So many died that amateur archaeologists armed with old trench maps and farmers tilling fields still find remains which are ceremonially put in coffins and buried. Three were buried last November.