The assembly poll results are a red flag for the BJP, but not really an endorsement of the Congress. And the TRS victory in ­Telangana shows regional parties still have a key role to play in 2019. 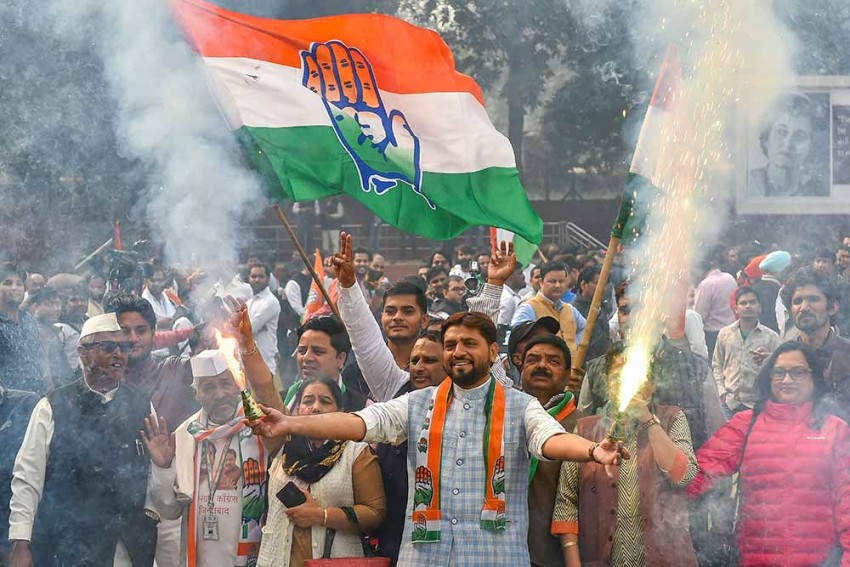 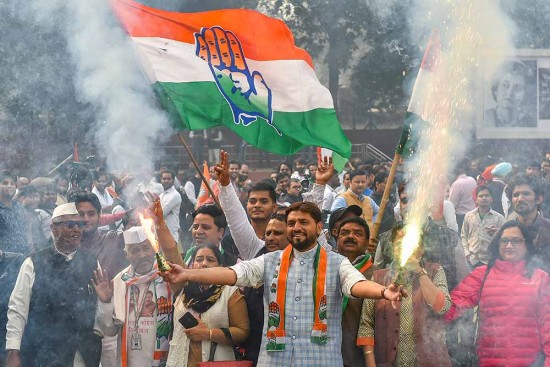 On a cold Tuesday, as four states in North and Northeast India saw their state governments being voted out, one clearly sensed a mood of political discontent. There was one important exception, though­—down south, in Telangana, India’s youngest state, the citizens had voted back the ruling party with an even greater majority. In significant ways, these results reflected three important trends. At the end of the day, the public perception of whether your government has delivered on key issues of governance does matter in deciding the electoral verdict. A supplementary factor that was patently evident was that the ‘cycle of anti-incumbency’, over time, caught up with all ruling governments and no political party was insulated from its impact. Finally, while central and state governments are often elected as per distinctly different mandates, the ‘context’ of each election has invariably factors of both national importance as well as specific local/regional sentiments at play.

In Madhya Pradesh and Chhattis­garh, the BJP was completing its third term in office. In Rajasthan, the party was going back to the electorate after one term. The BJP was also at the end of its fourth year in power at the Centre and the first visible signs of discontent with the government were evidenced in the Mood of the Nation Survey (MONS) conducted by Lokniti this May. Thus, the BJP was not just defending its rec­ord of governance at the state level, but also attempting to highlight the achi­evements of its central government and leadership, in order to sway the voters in their favour. The defeat would be jarring to the BJP as it reflects on its performance at the Centre and also has implications on its prospects in the 2019 Lok Sabha election.

The Congress, on the other hand, was so marginalised in all the three states, both during the last assembly polls  and the 2014 parliamentary elections, that failure to post a handsome performance this time would have deeper imp­lications for the existence of the party. While it did finally manage to make a comeback—though not very imp­ressive in Rajasthan or MP—in Mizoram, it could not retain power bey­ond two terms. There, the Congress lost to its traditional rival, the Mizo National Front (MNF), which has been an NDA ally. The Congress also failed to make inroads in Telangana. The Telangana Rashtra Samiti (TRS) facing the ‘Mahakutumbi’, a combine of the Congress, the Telugu Desam Party (TDP) and the Left parties, expanded its dominance. Here too, developments in the newly formed state as well as nat­ional issues dominated the debate. 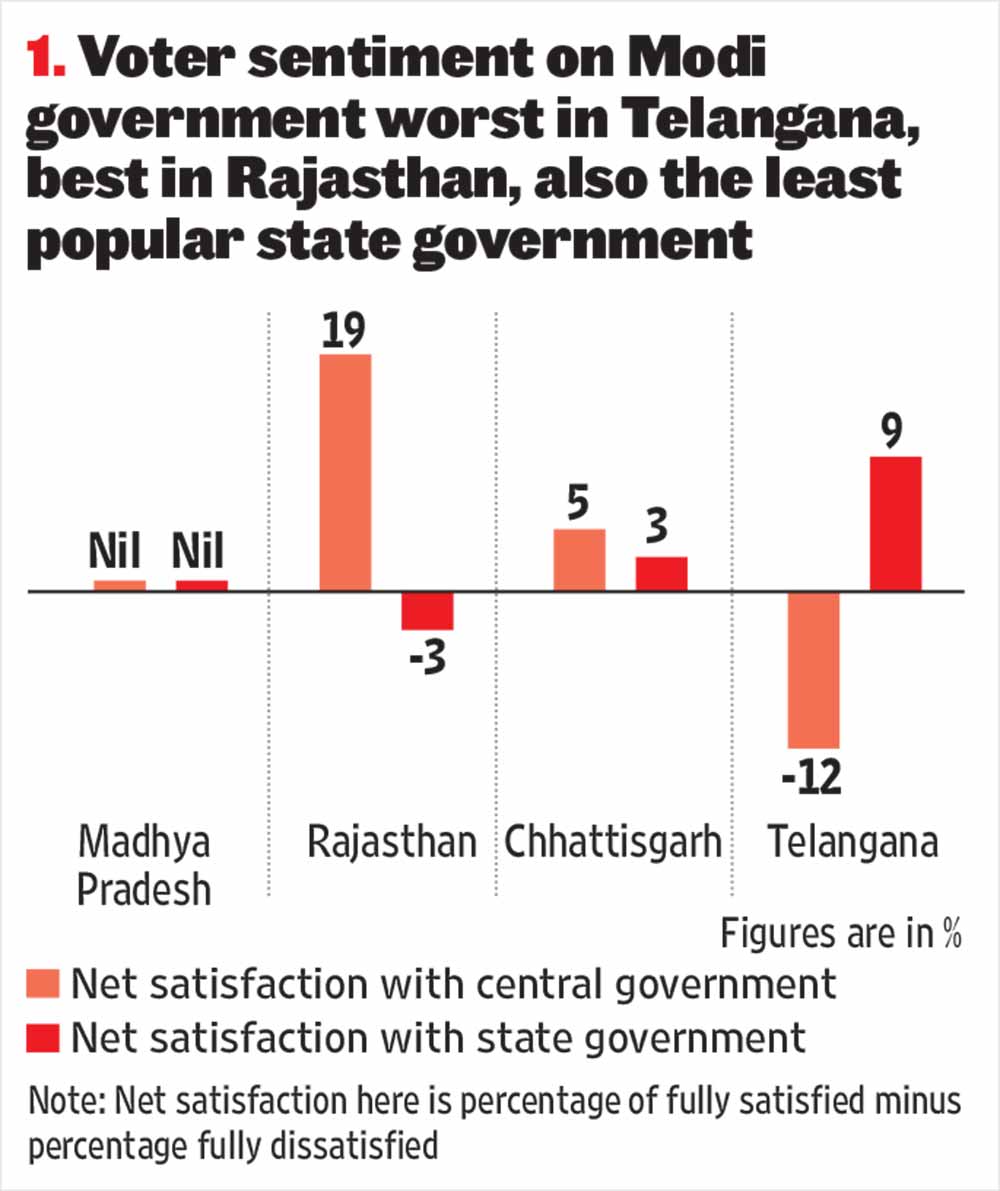 Across the states, the major concerns of common people appeared to be SIMI­lar. Issues of development, limited ­opportunities for employment and price rise were rated by respondents as the most important concerns (see Table 2). The voting out of a government in a state or giving it another term is often a testimony to its capa­city to address the issues that citizens of the state perceive as important. The levels of dissatisfaction with their state governments among the voters was also reflected in their res­ponse to select development/welfare schemes in the state. In Telan­gana, the state government was rated very positively when it came to impro­vement in the condition of roads, water supply and electricity. More than seven of every 10 respondents asserted that the expectations of the people behind the creation of a separate Telangana state had been fulfilled. On the other hand, in Rajasthan and Madhya Pradesh, while voters had heard of the range of welfare schemes that the state governments had introduced, a significant number reported not having benefited from them. This too was a clear reflection of limitations of ‘governance as access’ at the ground level.

The Congress’s return to power in the three critical states of North India can also be linked to the consolidation of support it was able to achieve among certain segment of society. Lokniti-CSDS survey data in the three states of North India that went to the polls suggest that the poor and economically marginalised favoured the Congress more than the BJP (see Table 3). In Rajasthan and Chhattisgarh, the Congress secured two to four percentage points more votes than the BJP among the poor and economically dep­rived, while in Madhya Pradesh this gap stood at four percentage points. 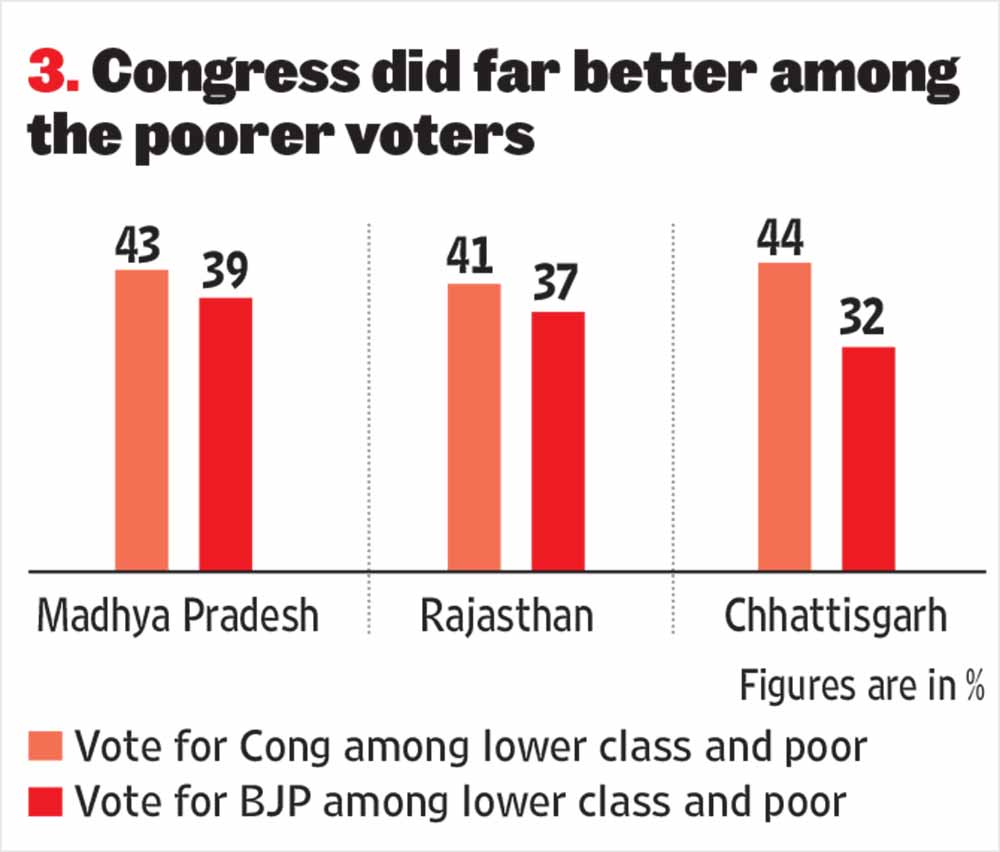 The poor and the lower economic class are the ones who depend on the state much more for their welfare and wellbeing, and a preference among them for the opposition Congress rat­her than the incumbent BJP could verily be a referendum on the ‘pro-poor’ policies and programmes of the state government. Down south in Telangana, the ruling TRS, which was returned to power, secured a much higher percentage of the votes of the poor as compared to its principal challenger, the Congress.

It is also significant to note that the ruling BJP saw a sharp decline in the support it enjoyed among Dalits in the three states of North India where it was voted out (see Table 4). The Lok­niti-CSDS surveys suggest that the Congress led over the BJP by 16 percentage points among Dalits in Madhya Pradesh. The lead among the Dalits for the Congress was five percentage points in Rajasthan, and 17 in Chha­ttisgarh. In all three states, if one were to look at the Lokniti-CSDS post-poll survey after the 2014 Lok Sabha elections, the BJP was ahead of the Congress when it came to the Dalit vote. 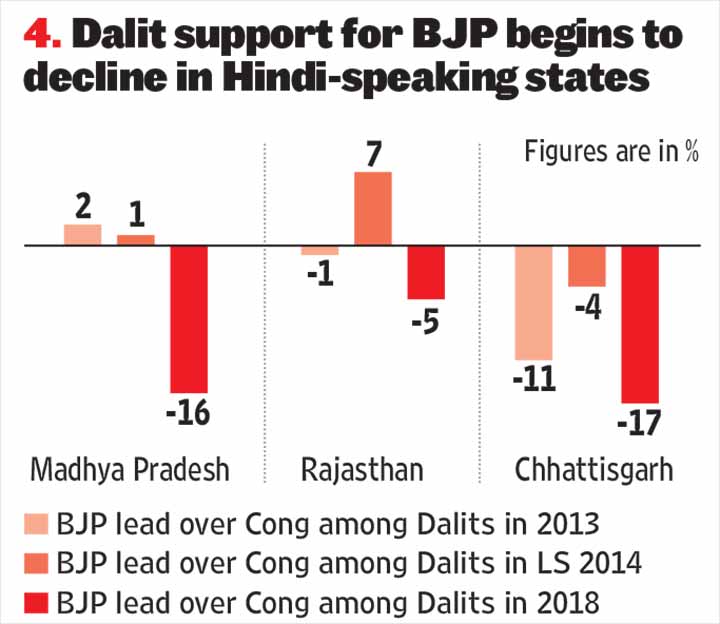 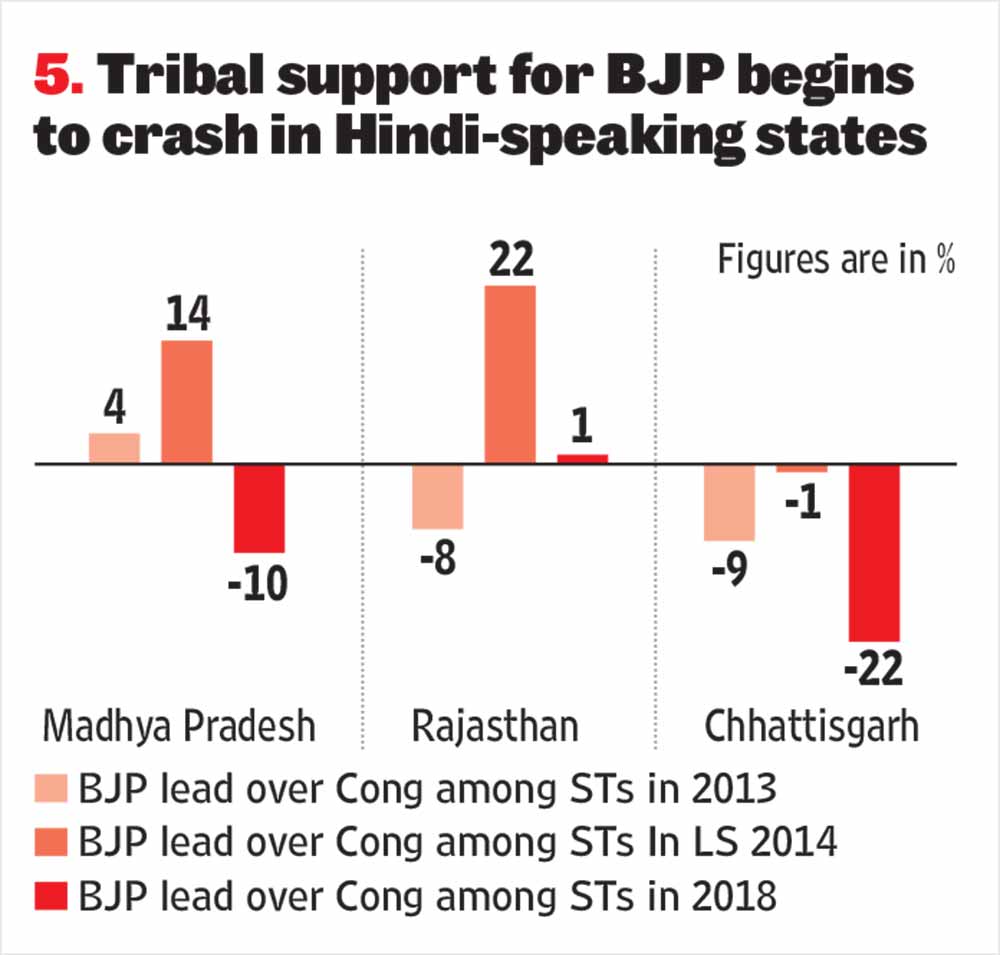 Having said this, it should be remembered that Rajasthan, Madhya Pradesh and Chhattisgarh are all essentially bi-polar states, and the relatively narrow lead the Congress has managed to get in Rajasthan and MP means that the party still lacks a shar­ply defined electoral base in these two states. In both Rajasthan and MP, the Congress got slightly less votes than the BJP among the OBCs. In Madhya Pradesh, the BJP could attract more than half of the upper and intermediate caste voters, while simultaneously ­retaining support among the OBCs. Thus, in spite of the favourable tilt ­towards the Congress among Scheduled Caste and Scheduled Tribe voters, the elections have not thrown up any new or dramatic social configuration.

Rural distress appeared to be a critical factor in the three states of North India that went to the polls. In Rajasthan and Chhattisgarh, the Congress secured a higher percentage of the farmers’ vote as compared to the BJP (see Table 6). A linked development is the sharp fall in the BJP vote in the rural areas in the three states. Given the large chunk of rural population in these states (a similar trend was seen in Gujarat last year, but the urban vote in that state helped the BJP retain power), the BJP appears to have lost a significant number of rural seats in all the three states. 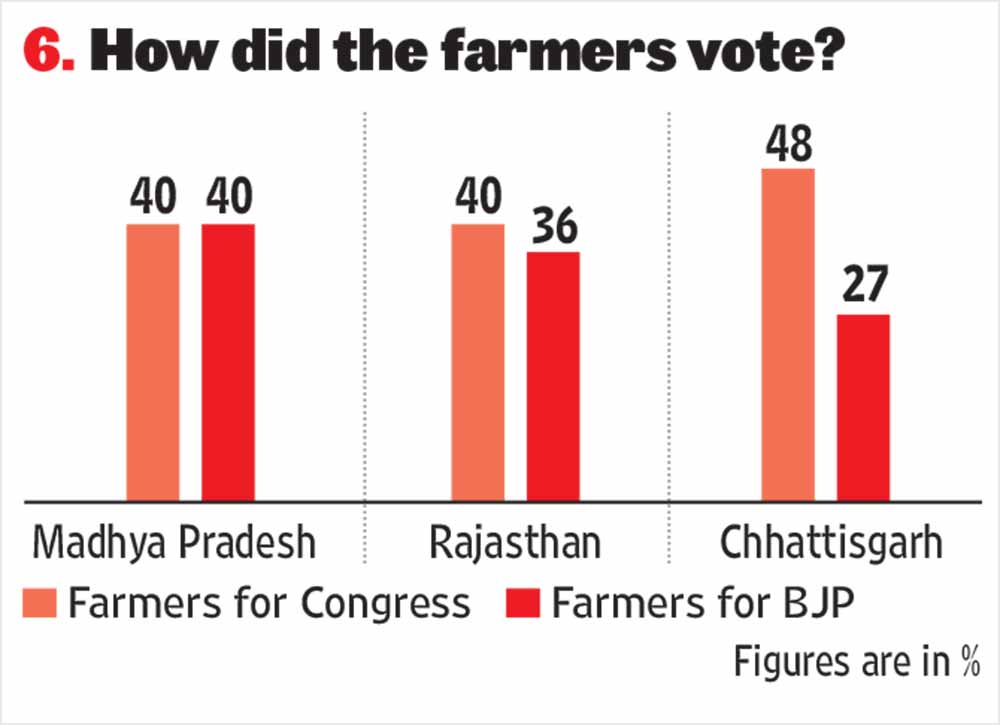 The poor preferring the opposition over the incumbent could verily be a referendum on a government’s ‘pro-poor’ policies and schemes.

In the shift of power from the BJP to the Congress in the three states of North India, the votes of the farmers, small traders, poor, Dalits and tribals seem to have played a critical role. In the 2014 Lok Sabha elections, it had been noticed that the BJP had a ­‘social funnel’ of support, which was wide among the social and economically privileged, and narrow among the socially and economically disadvantaged. This skew appears to have got even more magnified in the ass­embly election outcomes in the three states of North India.

The latest round of state assembly polls, the last before next year’s Lok Sabha elections, has important implications for the strategies political parties formulate for the coming big national polls. The defeats in North India are a definite setback for the BJP. The anti-incumbency cycle has now come full circle. In the past four years, the BJP benefited in state-level electoral contests by having the advantage of challenging the incumbent and wresting power, state after state. Gujarat started a phase of the BJP having to defend its own government’s records. While it just managed to pull it off in the home state of the prime minister, it was not successful in its key Indian states.

While the Congress can rejoice on its return to winning ways, it also needs to bear in mind that having lost power in Mizoram, it is no longer in power in any state of the Northeast. Down south, its efforts to form a grand alliance with the TDP and the Left parties could not prevent the TRS from returning to power. In preparation for next year’s national polls, the two major all-India parties, the Congress and the BJP, face severe challenges. The Lokniti-CSDS survey in the states that just went to the polls sought to tap the public mood on next year’s Lok Sabha polls. It is interesting to note that the expression of party preference if a Lok Sabha poll were to be held today was very much in consonance with the res­ults in the assembly polls in all the states except Rajasthan—the only state where respondents seemed to favour the BJP if Lok Sabha elections were to be held now (see Table 7). 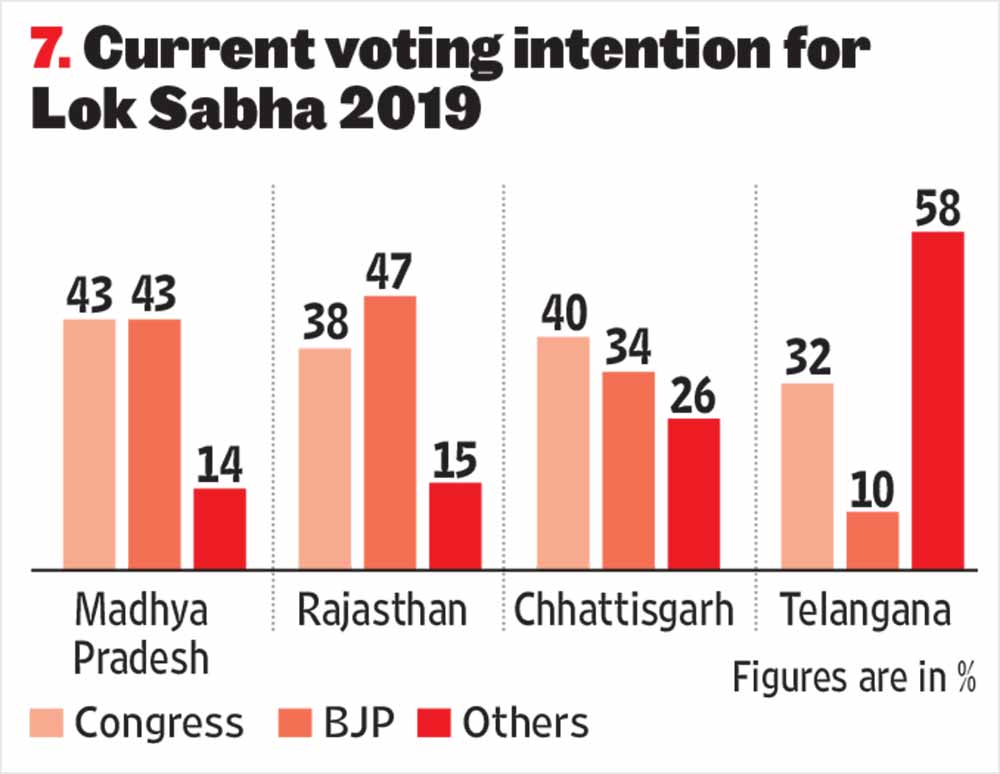 The just concluded polls may have set the tone for the Lok Sabha elections. Yet it must be added that four months is a long time in politics and could well see many a surprise twist and an unanticipated turn. Parties are sure to rework their strategies and priorities as they prepare for a crucial national election. Nonetheless, as far as the message of this round of elections is concerned, it is a red flag for the BJP without an endorsement of the Congress; and the key role state parties are bound to play—something that the victory of TRS symbolises.

The articles here are based on post-poll surveys conducted in Madhya Pradesh and Chhattisgarh, a late November pre-poll survey conducted in Rajasthan and a pre-poll conducted in Telangana in the first week of December by Lokniti, Centre for the Study of Developing Societies (CSDS), Delhi.

The sampling design adopted for all four states was multi-­stage random sampling. The assembly constituencies were ­randomly selected using the probability-proportional-to-size method. Thereafter, four polling stations within each sampled constituency were selected using the systematic random ­sampling method. In highly urban constituencies, five polling ­stations were selected. Finally, 38 voters were randomly ­selected from the electoral rolls of the sampled polling station, and field investigators were asked to interview at least 25 of them.

Interviews during the surveys took about 30-35 minutes. In order to be representative of the state’s population profile, the raw sample has been weighted by gender, locality, religion and caste group based on Census 2011. The data reported in the ­articles have also been weighted by the actual voteshares ­secured by the main parties/alliances in the elections. In the case of Chhattisgarh, limited use of weighted survey data has been made since the vote estimates made by Lokniti were at ­divergence with the actual outcome.

Vijay Mallya May Not Be Returning To India Anytime Soon