Its wine menu is superb, and the rasavodka (rasam + vodka) scores over vodka golgappas. It's brought in non-vegetarian fare too... 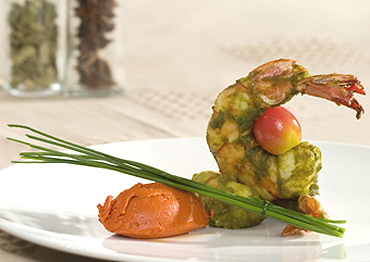 Between Dakshin, ITC’s flagship Indian restaurant, and the darshini—the ubiquitous stand-and-eat idli-dosa-bisibele bath outlets—there was a yawning gap in Bangalore until two years ago, when the restaurant ‘South Indies’ added fine tableware and trained waitstaff to its menu of food from the four southern states. Its sister restaurant bonSouth raises the bar literally—its wine menu is superb, and the rasavodka (rasam + vodka) scores over vodka golgappas.

It’s brought in non-vegetarian fare too; the menu is heavily tilted in favour of meat-eaters. Over multiple visits, I’ve been consistently impressed, whether by the brunch buffet (Rs 550), or a la carte dinners. The kodava chette meen curry (prawns in red chilli and coconut masala; Rs 495) is excellent with both rice and kal dosa (a thick dosa steamed in banana leaf; Rs 75 for two). The gongura mamsam (Rs 350) is a rich, complex Andhra mutton curry tempered with sour greens. And mamidakkai pappu, the solitary veg dish we ordered, was a surprise: lentils with the lovely tart undertone of raw mangoes. Portion sizes are generous—our order could have happily fed three—so bonSouth is popular with large groups. But the coffee was a letdown—for that, better to head out to a darshini.