‘Everyone Talks, Nothing Happens In This Country’

Face of the ‘Patidar andolan’ for a reserved quota, Hardik Patel, shows erratic signs of being an astute politician in the making. 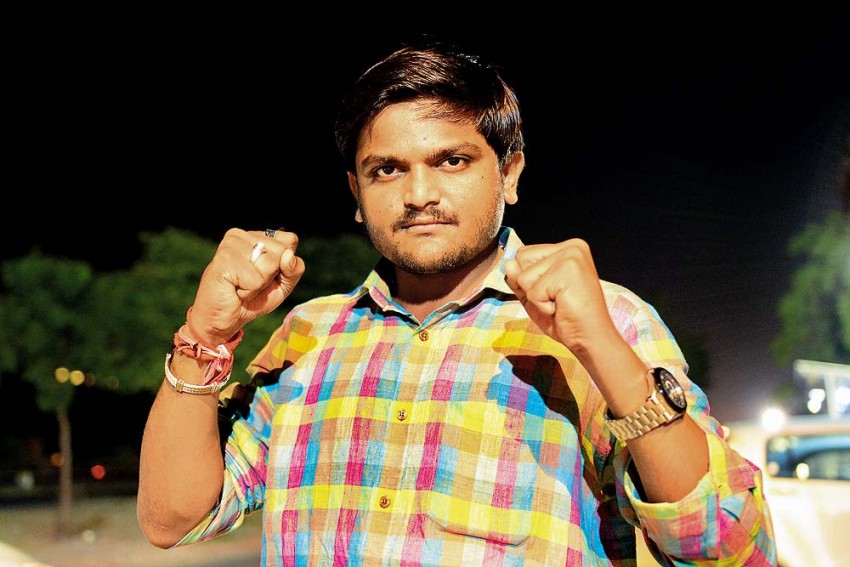 Mayur Bhatt
Ushinor Majumdar September 14, 2015 00:00 IST ‘Everyone Talks, Nothing Happens In This Country’ 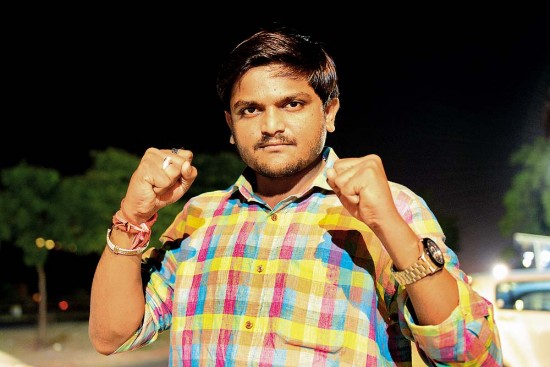 The callow young man, Hardik Patel, variously estimated to be between 22-25, has not only emerged as a rabble-rouser but shows erratic signs of being an astute politician in the making. Ask him whether it is wise for the government to spend Rs 3,000 crore on building a statue of Sardar Patel and whether it should have been better used to create jobs, he solemnly proceeds to talk about the role of the police in imposing Section 144. Other inconvenient questions received monosyllabic replies as Ushinor Majumdar caught up with the face of the ‘Patidar andolan’ for a reserved quota in colleges and government jobs. Excerpts:

This andolan is not political. Let’s leave politics aside. I have no knowledge of it but those who are into politics are doing a poor job. We want to unseat them.

Narendra Modi as CM had announced several thousand crores for irrigation and other agri-projects. Have they not helped the Patidars?

That doesn’t mean each and every village has got water. In Gujarat, the rich have gotten richer and the poor have become poorer. If a person sells his 20-acre agricultural land in the village and migrates to a city to buy a 5-bedroom flat and a car, that is not progress. If that person could earn from the land, that would be better for him.

We don’t want reservation removed. Just include us in it.

Can reservation be removed from India?

No, it cannot and will not be removed from India. It can only be removed if someone says so. Politics and politicians are too deeply invested in it for them to take action. The day it is removed, this country will become a living hell.

Should Hinduism continue to survive on caste lines?

India cannot be caste-free...though the country is digressing because of that.

Where did you get the figure of 9,000 farmer suicides over the last decade?

There is no actual figure. It’s been passed down. Two years ago, some Congress netas spoke of 8,000 suicides. Now, it must have gone up. There’ll never be a correct RTI reply to this question.

Why? Are these figures not recorded?

Everyone just talks. Nothing happens in this country. I am tired of this country’s politics. If it was in my hands, I would have removed them all. (*mouths an expletive)

Everyone speaks of change. You are trying something...

I have a blueprint to change the country and Arvind Kejriwal may also have the same blueprint. But Kejriwal is not powerful. He is a bogus man. He has the plans but cannot carry it out. Had Balasaheb Thackeray the same blueprint, he would have changed this country.

What about Narendra Modi? He has the power....

What are you saying? I have not seen that he has power. He tried to implement a blueprint but has been unsuccessful. Politicians are fine as long as they are on the ground. Once in power, they are not.

You had also initiated a special protection plan for women. But experts point out that in the same region, the sex ratio is very poor (909/1000 in Gujarat; even less in Patel-dominated areas), especially amongst the Patidar community.

“If a girl goes to college...someone grabs her hand, then we must chop off his hand. We need guns for our protection.”

Yes, the highest number of unm­arried rural youth in Guj­a­rat are from the Patel community. Sex ratio is 790 amongst us. First, we are fighting to provide security to girls, and not to give birth to them. If a girl goes to college and someone grabs her hand, then we must chop off his hand. If a girl complains of sexual harassment, we will stand behind her. If a farmer complains about harassment from goons in the fields, we will beat up those goons. Each person in this country should be given a gun for their protection.

Wouldn’t that give goons and criminals legal access to arms?

They already have enough weapons, albeit illegal. Those who have licensed weapons never murder anyone. Unl­ice­n­sed weapons are procured from Bihar and Uttar Pradesh.

Were you ever with the Aam Admi Party?

I have never been a member of any political party, though I have been in photos with several politicians. If I ever have power, the first thing I would do is to remove the corrupt politicians; those with rape and other criminal cases against them. If terrorists are captured in this country, they should be shot immediately. There is no need to arrest them. They shoot 180 people at the Taj Mahal hotel in full public view and they are given a trial for five years, fed biriyani and shown Bachchan’s films (in jail).

Is Bal Thackeray your ideal?

Sardar Patel is like god to me. I idolise Thackeray because of his decision-making ability. When he died, 25 lakh people joined the procession because he was a good man. That is great power, and if Bal Thackeray had become the country’s prime minister with that power, Dawood Ibrahim would have been brought back to India.

“Balasaheb was right on migrants taking all the jobs. It’s happening in Gujarat, they are also committing all the crimes.”

But he was recognised as a divisive leader who spoke against migrant workers.

He was right in saying that because migrants will come and take the jobs. The same thing is happening in Gujarat now. Industries and companies are being set up by outsiders. All the crimes being committed here are by migrants. The loot and murder of diamond merchants too is carried out by outsiders, not Gujaratis.

The Modi government (both in the state and now at the Centre) has reduced the number of public jobs. So is your demand for reservation more about admission in technical colleges or for jobs?

There are hardly any jobs. MBA graduates are working as ordinary salesmen. This is a large country. The government has to create jobs. There are very few policemen in this country as per the need. In Gujarat (he pauses), there are just 80,000 policemen.

So, how many should there be?

There are six crore people here, so you calculate. If there are 10 lakh policemen, it will end crime. Nothing can happen in this country. Sau mein se navvai beiman, phir bhi kehte ho bharat mahaan (90 per cent of the population is corrupt, but still you call it a great country). Red Fort is a place where one should speak about the country’s real interests and not about making toilets. There were also those election promises about acting against ceasefire violations at the border and getting two heads for one (in cross-border violence). But, I haven’t seen any heads yet.

A columnist from your community feels that Patidars need to learn English and not chase after reservation.

If Patidars are not educated and don’t know English, then how are Patels the highest number of Indians in the US? Check the phonebooks. (**adds expletive) How the hell is he calling us uneducated? They are Gujarati children. It is their choice what they want to learn. Gujarati children have the highest number of degrees, including MBAs. You can’t get such degrees without knowing English.

On his vision of India