Everyman Is An Apu 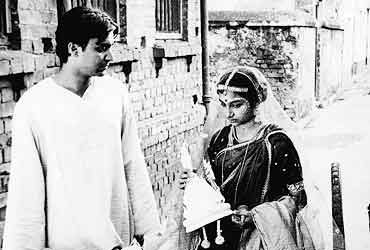 outlookindia.com
-0001-11-30T00:00:00+0553
The great chronicler and interpreter of contemporary India is also its master of understatement. Satyajit Ray’s most famous work, Pather Panchali, marked the beginning of a discovery of India for himself and for the educated middle class, silently observing how the other half lives.

But observation is a form of intervention; the discovery of India resulted in a discovery of cinema as well. Pather Panchali invented the language it needed to tell its story of an educated Brahmin family fallen on evil days. What makes it poignant is the depth of human relationships in which it enfolds its characters, the warmth of observation with which it unfolds its slender narrative.

The youth who emerges out of the colonial past, rural and urban, in the three films of Apu’s childhood, adolescence and youth (the Apu trilogy) is, quintessentially, a product of the India of Tagore, Gandhi and Nehru; in other words, of the interaction of East and West, of the Enlightenment and the Upanishads.

In recalling the trilogy, particularly Pather Panchali, we are tempted to think in terms of the past. But see the film again and it lives; so little has changed. Pather Panchali tells us more about Indian rural reality than all the pictures of human misery in television coverage of floods and droughts or other screen-stories of poverty.

Pather Panchali’s effect on Ray’s contemporaries was electrifying. Two brilliant minds woke up from their slumber—Mrinal Sen’s from Raatbhor (1955) and Ritwik Ghatak’s from Nagarik (1952)—both of which were steeped in the stagnant waters of traditional Bengali cinema. The change that came over Sen in Baishe Sravan (1960) and Ghatak in Ajantrik (1957) was too much of a quantum leap to be dismissed as evolutionary. What is remarkable is that both were highly individual talents. Pather Panchali did not inspire imitation in them; all it did was to make them wake up to themselves.

Virtually all of Ray’s films are extensions of the Apu trilogy. Apu is the embodiment of the sensitive, imaginative youth emerging from rural India into the urban world, slowly yielding to its blandishments and to the inevitability of corruption. It is Apu who in Pratidwandi rejects the possibility of a job by succumbing to humiliation and falsehood; in Jana Aranya he undergoes the trauma of supplying a call girl to his business client; in Seemabaddha he stages labour trouble in order to justify a delay in delivery. In each film, the essence of the character is identical to Apu’s, full of sensitive qualities for which the world has no use. The story of his life is the story of the soul’s surrender, step by inexorable step, of the moral imperative.

The Ray model in filmmaking created a space for the avant-garde and gave a voice to the cultural minority. It is a model that practically all ‘Parallel Cinema’ directors have followed to varying extents—a low budget appropriate to the country’s resources, the director’s complete control of the creative process, freedom from heavy make-up and diffuse glamour photography, the freshness of outdoor locations and non-professional actors. How unimaginable was the old woman of Pather Panchali in earlier Indian cinema!

But no one has followed Ray into the children’s playground with nearly the same success. Goopy Gyne Bagha Byne was an outstanding box-office hit. Never have generations of children loved the songs of a film more—all written and composed by Ray. Not that he let them off without a secret sermon; but it was all so enjoyable that they did not mind. How many anti-war and anti-violence films have spoken to children?

Ray’s position has been critiqued as overly pro-science, anti-myth and male-biased. There have been attempts to replace him with Ghatak as a cult guru. But much of this has proved to be shadow-boxing for, as in Tagore, myth is an inseparable part of the Ray consciousness. The contemplative space with which he surrounds his characters, differentiating his narrative mode from that of the West, comes from a profoundly Indian spiritual base. Only in his last three films, made from the sickbed, does his overt didactics sadden us with its obviousness. Alas, the master of understatement overstates in the end! Ray will be remembered for his earlier films, for the magical innocence of his first 10 years, led by the unforgettable Pather Panchali.

(Chidananda Dasgupta is a leading Indian film critic, filmmaker and author of The Cinema of Satyajit Ray)

Dew Upon The Grass