Everybody Loves A Good Tsunami

And none more than the cash-flush NGOs, whose unsupervised enthusiasm is driving too much to some, nothing to others 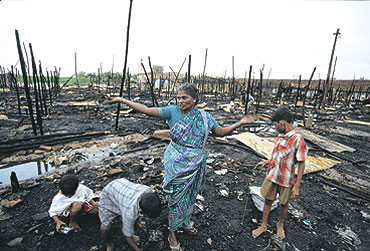 "When you take honey from the hive, you do lick what sticks to your palm."
—A Tamil proverb

The tsunami of December 26, 2004—the biggest natural disaster on earth in public memory—triggered the largest fund-raising exercise, generating $12 billion the world over. India was one of the largest recipients of aid from UN agencies and NGOs. Tamil Nadu, with more than 8,000 dead and 1.3 lakh homes damaged, received over Rs 4,000 crore of NGO money, of which at least Rs 3,000 crore has been allotted to the worst-affected Nagapattinam district. About 650 NGOs are working in the 13 tsunami-affected coastal districts of TN and in Pondicherry. Where's all the money going? An Outlook investigation into NGO spending revealed that disaster management has been a disaster in itself. Flush with funds, NGOs are squandering money and resources. And no one's asking them questions.

The glut of funds, of course, has led to abuse and misuse. According to a recent report of the International Federation of Red Cross and Red Crescent Societies (IFRC), many aid agencies...