Everybody Loves A Don Who Brings In The Votes

A week, they say, is a long time in politics. But months, even years, in jail on serious charges rarely make a dent in the political careers of the high and mighty in the Gangetic badlands. 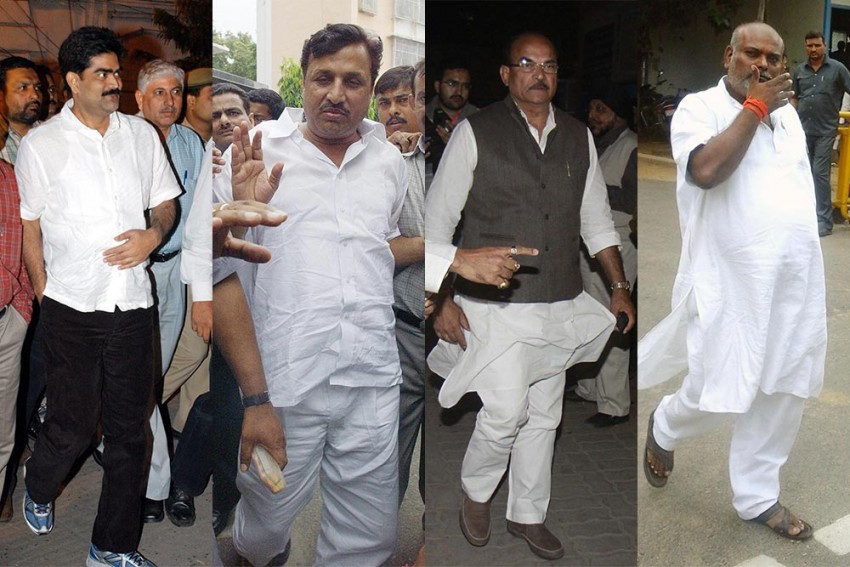 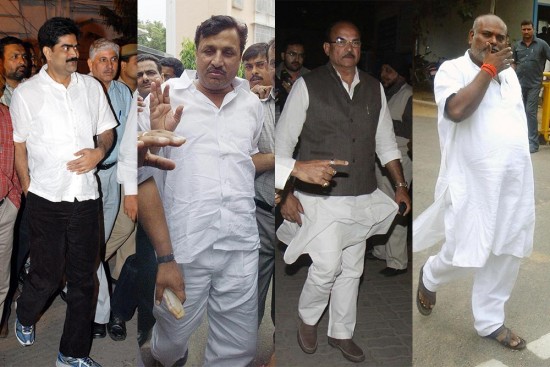 Politicians with criminal ant­e­cedents appear to have lost none of their heft long ­after the Supreme Court and the ­Election Commission of India made a concerted bid to purge Indian politics of guns and goons, crooks and the corrupt, and muscle and money power. Every time there is an election, they bounce back with ­remarkable resilience and impunity to prove their worth, one based primarily on their might to influence the poll ­results whether or not they are ­the­m­selves in the fray.

So pervasive is their clout that political stock remains high for many even when they are cooling their heels behind bars—some for months, others for years—for crimes as heinous as murder and rape. There is no dearth of eager parties that show no compunction in hiring their services for short-term electoral gains. They are dons for all seasons, and they are here to stay because many parties simply cannot afford to dump them bec­ause of their vested interests.

The other day, when Raj Ballabh Yadav, the Rashtriya Janata Dal (RJD) legislator suspended from his party after being accused of raping a minor girl in Bihar, landed up at the doorstep of Laloo Prasad Yadav in Patna soon after his release on bail, few batted an eyelid. With the RJD president’s well-known penchant for patronising tainted leaders of all hues over the years, the meeting failed to make anybody—except some Opposition leaders—sit up, take notice and raise eyebrows. Laloo, after all, had never been apologetic about having leaders with criminal antecedents in his party.

Mukhtar is not the lone history-­sheeter known for his closeness to successive parties in power in Uttar Pradesh. Another gangster in police records, Raghuraj Pratap Singh aka Raja Bhaiyya, who faces two dozen cases of murder, kidnapping etc, is ­minister of food and civil supplies in Akhilesh’s cabinet. The Independent MLA from Kunda was once also accused of encroaching upon 427 hectares of forest land in Pratapgarh. That he ­continues to be a minister indicates the enormous clout he has wielded over the years, allegedly because of his close proximity to top SP leaders.

Raja Bhaiyya may be one of the most ­infamous of the lot, but the list of leaders with a criminal background in India’s most populous state is long and includes relatively lesser known names such as Hari Shankar Tiwari and Atique Ahmad. And the parties they have been part of cover almost the entire political spectrum.

“When D.P. Yadav’s son, killed my son, he must have been confident he would get away with ­murder due to his father’s clout,” says Neelam Katara.

The pictures changes little across the state border with Bihar, where Laloo chose not to sever his ties with former RJD MP Mohammed Shahabuddin even after his conviction in multiple criminal cases, inc­luding murder and abduction. Far from it, he not only kept the Siwan strongman in the national executive of his party, its highest decision-making body, during his 11-year-long incarceration, but also fielded Shahabuddin’s wife, Hena Shahab, in two Lok Sabha elections in a row, after he was rendered ineligible to contest elections because of the existing laws.

Shahabuddin, who was recently sent back to jail after the apex court cancelled his bail granted by the Patna High Court, had apparently played a key role in helping Laloo strengthen his Muslim-Yadav (MY) votebank in his halcyon days. But he is not the only tainted leader who has stood by Laloo through thick and thin all these years. The 55-year-old Raj Ballabh—who won the assembly election from Nawada last year—has also been a long-time Laloo loyalist. Even though he had been suspended by the party following public outrage over the rape case earlier this year, he did not find Laloo’s doors shut on him when he came calling—­incidentally, just a day before the Supreme Court was to hear a petition filed by the Nitish Kumar government seeking cancellation of his bail granted by the Patna High Court.

Raj Ballabh, of course, predictably claimed there was nothing political about the meeting—he had merely gone to ext­end Dussehra greetings to his party president. Laloo sought to downplay the issue, insisting there were no differences over it between Nitish and him. “How can I shoo away somebody who turns up at my gate?” he asked. “He (Raj Ballabh) had not come to talk about court case.”

The Opposition parties, though, did not miss the chance to point out that the meeting with Laloo lasted more than two hours. “Lalu is known for turning away people from his bungalow, but he spared two hours for Raj Ballabh,” said senior BJP leader Sushil Kumar Modi. “It is primarily because of their close association that the Nitish government could not oppose the legislator’s bail petition strongly in the high court.”

Laloo’s meeting with the rape accused cast a shadow on the ‘grand alliance’ government in Bihar, with reports surfacing about the differences between the RJD and the JD(U) over the issue. Since Nitish has always stressed on probity in public life and his government had moved the apex court for cancellation of Raj Ballabh’s bail, many in his party ­believed that Laloo, who heads the largest party in the ruling coalition, would have done well to avoid meeting the tainted legislator.

That wouldn’t have been easy, though, for Laloo, who has never disowned any of the bahubalis (strongmen) associated with his party in the past. A few months ago, a senior RJD minister Abdul Ghafoor had kicked up a political storm when he paid a ‘courtesy visit’ to Shahabuddin at Siwan jail. Even though the Opposition dem­anded the minister’s ouster for visiting a convict, Laloo, who has moved the Jharkhand High Court against his own conviction by a CBI court in the fodder scam, did not bother to take any action against Ghafoor.

Political observers feel that Laloo’s meeting with Raj Ballabh, which took place after the 15-year-old rape victim and her father from Nalanda district had said they feared for their lives due to the release of the influential legislator on bail, raises questions over how dependent political parties are on tainted leaders.

Neelam Katara, whose son Nitish Katara was 23 years old when he was killed by Uttar Pradesh politician D.P. Yadav’s son Vikas Yadav and his associates in 2002, says it is high time the parties stopped giving tickets to criminals. “Who was not aware of D.P. Yadav’s criminal background? And yet he was given tickets by the Samajwadi Party, the Bahujan Samaj Party and even the BJP in different elections,” she says. “I wonder why the political parties can’t wait until such candidates are acquitted in all criminal cases. Can’t the India polity do without them? What difference will it make if those facing criminal cases do not contest the elections for a few years?”

Neelam, whose valiant and prolonged battle to ensure justice to her murdered son was vindicated last week with the Supreme Court upholding the 25-year prison term without remission to his killers, recalls that many parties had ­argued that such cases were invariably politically motivated. “In government service, if anybody, right from a peon to a senior bureaucrat, faces a criminal case, his entire career is ruined, but that is not the case with politicians,” she says. “This has serious ramifications on the ongoing cases against them.” 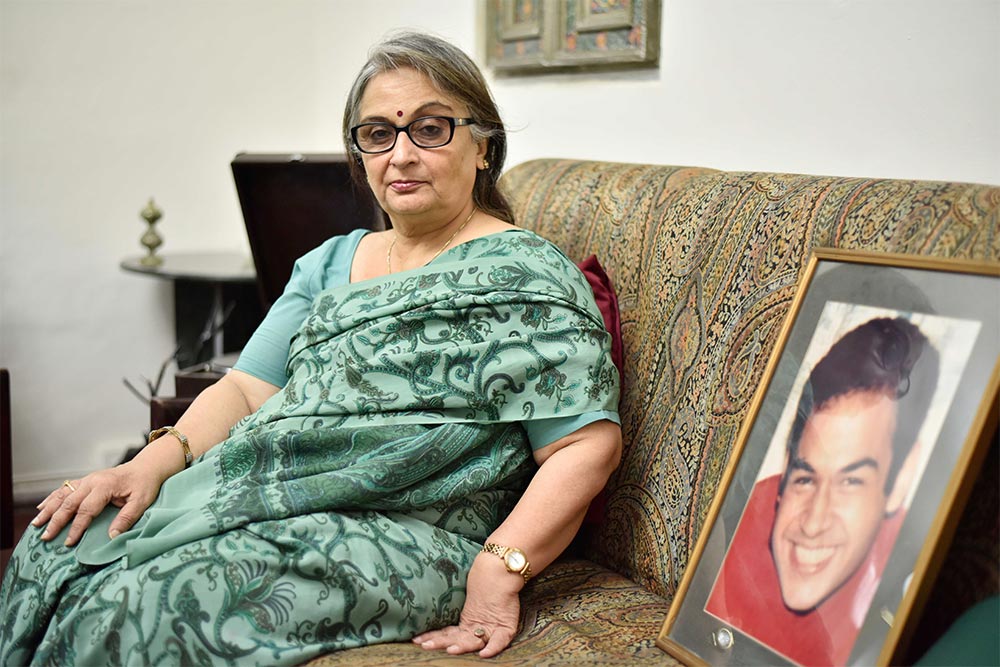 Neelam Katara fought a long battle against her son’s killers

D.P. Yadav allegedly used his political influence to shield his son from the murder case. “When my son was killed, his son must have been confident that he would get away with the crime because of his father’s enormous political clout,” says Neelam. The 64-year-old, whose son was shot dead because of his relationship with D.P. Yadav’s daughter, argues that as lawmakers, the criminal-politicians alw­ays wield a lot of power—enough to influence the cases against them in various ways during the trial. “I have gone through the experience as the victim,” she says, referring to her long fight seeking justice for her son. “These politicians call the shots, travel in the beacon-fitted vehicles and make use of the power that flows from their position. The people of their constituencies also see them as Robin Hoods of sorts because they undertake development initiatives there.”

Neelam has a point. Shahabuddin, who has been sentenced to two life-terms in separate murder cases, is known to have opened educational institutions and other welfare centres in Siwan in his bid to build his support base. When he was not in jail, he used to receive hundreds of favour-seekers at his Pratapur bungalow. While going back to jail after the Supreme Court revoked his bail recently, he said his supporters would teach Nitish a lesson in the next elections. Hena, his wife, alleged that Nitish had turned vindictive against her husband ever since he foiled his bid to secure a majority for his ­seven-day government in March 2000. With unmistakable chutzpah, Shah­abuddin apparently sought to drive home the point that people like him were still capable of influencing elections.

Leaders with criminal records are not unique to Bihar and UP alone. According to a recent study by Association for Democratic Reforms and National Election Watch, 24 out of the 78 cabinet ministers (31 per cent) in the Narendra Modi ­cabinet had declared criminal cases against them. Barring 10, the rest (18 per cent of the cabinet) face serious charges such as attempt to murder, inciting communal strife and poll violence. The ­Upper House, too, is no stranger to the phenomenon. Of the 57 new members who entered the Rajya Sabha this year, 13 (23 per cent) had declared criminal cases against them, including seven with serious charges. The time to clean up the ­Augean stables of the Indian polity, ­especially the electoral process, probably has not come yet!

Bringing Up The Specialist