‘Every Investor Firm’s Accounts Must Be Audited By The CAG’ 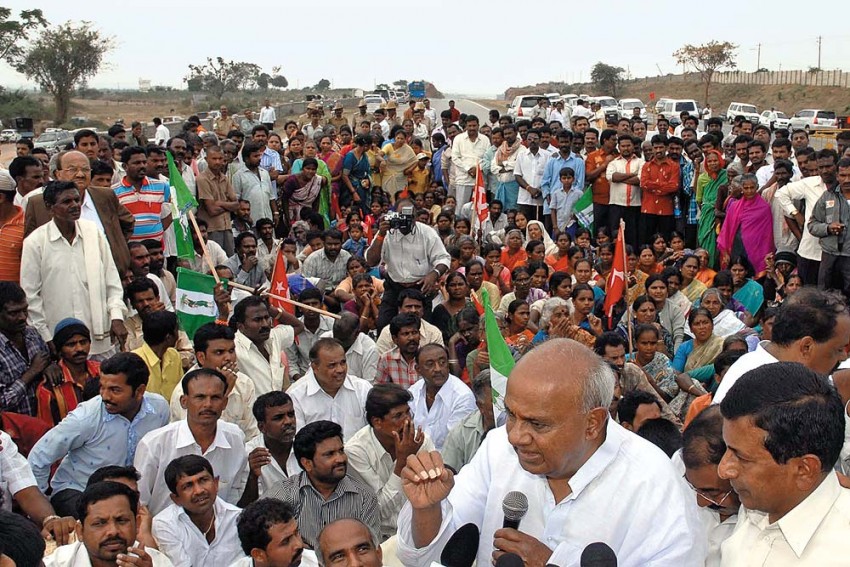 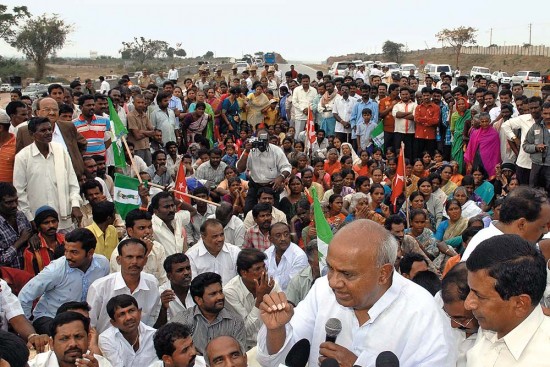 The Bangalore-Mysore Infrastructure Corridor Project (BMICP) has all the features that the Opposition fears will affect landowners and farmers if the Land Acquisition Act, 2015 is passed—deprivation for farmers while corporates benefit. The campaigner-in-chief against BMICP, former prime minister H.D. Deve Gowda, has lost track of farmers still awaiting justice. Even former BJP ministers in Karnataka privately admit that the BMIC should make the framers of the new land law think again.

Deve Gowda faces a peculiar situation. The MoU with a consortium including foreign firms and the Kalyani group called NECE in 1994-96 was signed when he was CM. The MoU was developed as a framework agreement later, when an extra 20,000 acres was added for the creation of seven townships, amended later to five, to be developed along the route. The land rates were fixed by the deputy commissioners. Land was acquired at throwaway prices. Farmers alleged that their lands had been taken even though they were not anywhere near the corridor. The matter is in the courts; the great corridor remains a dream. The questions Deve Gowda has been raising since long remain unanswered. He spoke to Imran Qureshi on the politics of land determining development. Excerpts:

You have been fighting a long battle against acquisition of farmers’ lands for the bmic project, raising issues now hogging the limelight. What according to you are the pro­blems in acquisition of land from farmers?

Land is more valuable than gold. Several SEZs were announced but they all became real estate deals. You have seen the Enron controversy and the bmic one. These investors don’t bring any money and they try to exploit farmers.... Not a single investment has come in the last one year because it is very difficult to get consent of 80 per cent of the farmers. This is the main hurdle.

If good compensation is paid, why should there be any objection?

“Rural youth don’t want to work in fields, yet it’s also tough to acquire land after taking 80 per cent consent.”

Today the rural population is migrating to cities. Why? The land holdings are not the same as in 1947. It has got fragmented largely to fight rural distress. Paying compensation at market value is not everything. You need to provide rehabilitation, provide alternative jobs, provision of housing to those who lose land. An essential clause I have suggested in my amendment is that any domestic or foreign investor company’s accounts should be audited by the Comptroller & Auditor-General. Otherwise, it will mean permanent suffering for farmers. In fact, at the time of the investment itself, the companies’ financials should be scrutinised by a separate body.

Do you think the land acquisition bill for PM Narendra Modi is like former PM Manmohan Singh’s nuclear bill moment?

Dr Singh tried to get the nuclear bill passed with all sincerity. Modi wants to move in all directions—from bullet trains to everything. But, the question is how to take land. No foreign investor will come here and go looking for land. No investment will come for charity.

Is it becoming a kind of class war between two sections of society?

“Instead of this tit for tat policy, Congress and BJP should find a solution that helps both farmers and development.”

If somebody believes young people are quietly watching all this, he is mistaken.... On one side our rural youngsters do not want to work on the field because of ins­ufficient and timely lending, provision of good seeds and marketing and minimum sup­port price. Yet we need to compete with other nations. But taking land after 80 per cent consent is also difficult. The government will have to take responsibility for acquiring land. The stand of the political parties is one thing but some CMs of states like Uttar Pradesh, Karnataka and Himachal Pradesh have written letters that it is not feasible.

What is the option available for urbanisation or for industry to acquire land?

Both the BJP and the Congress should realise that this tit for tat policy is not an option. Both sides must sit together and find a solution that both protects farmers and encourages development. This is my humble opinion.