If Shobhaa De's the Queen of Page 3 in Mumbai, Satish Gujral's the dada of them all in Delhi... 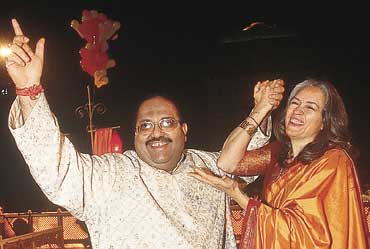 Shobhaa De has been the Queen of Page 3 in Mumbai; Satish Gujral the Dada of them all in Delhi. Rarely a day goes by when you don’t see their pictures or names in print. Do they ever eat at home? Lunch maybe.

Other heavyweights in the celeb circuit this year: Nalini Singh and Nafisa Ali in Delhi; Parmeshwar Godrej, Marc Robinson and Nina Pillai in Mumbai. Bina Ramani’s stars dimmed after the Jessica Lall incident. Pavan Varma is now making waves in Cyprus and Anita Pratap, ex-cnn, is based in Norway. This gives those on the editors’ B and C lists a fighting chance to make it to the hallowed space!

For those of you living in Andaman Islands, Page 3 is in the supplement, not necessarily on the third page of the papers. And devout readers turn to it before they take in front-page news. It’s about fashion launches, cigar promotions, restaurant openings but mostly partying. It is the preserve of the glitterati and the chatterati in the big cities, Pune, Ahmedabad and Bangalore included. These are the rich, the famous and the cool. But moolah by itself won’t get you on it.

Services of publicists have been known to be employed by the truly desperate. It may even work. A publicist’s wife writes a column for one of the smaller papers. But the Catch 22 is: if you try too hard, you won’t make it. Nalini Singh is a natural; she’s famous, glamorous and has amazing manners.

So, will Page 3 be any different in 2002? Not likely, unless some genius comes up with a better idea. But we’ll be seeing some new faces. In Delhi the diplomatic crowd is nomadic. Jacqueline and Richard Celeste, ever so big last year, are back in Ohio. The new US ambassador prefers the jnu set. The French ambassador’s wife Countess Catherine de Montferrand is the current toast of the diplomatic party circuit.

Of course, there’ll always be complaints, from wannabes, that the same faces appear time and again on these pages. That’s like asking movie mags to cover the starlets and the extras instead of Shahrukh and Kareena! The day Page 3 starts covering the bhangra and dandia raas set in Karol Bagh and Jogeshwari, it’ll lose its draw. The readers want to know where Rohit Bal and Aarti Surendranath chilled out on Saturday night.