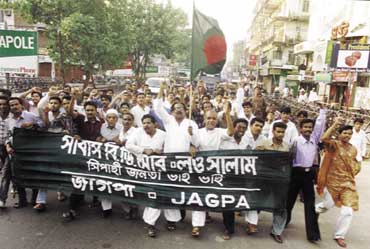 One evening last week, the national television showed Prime Minister Sheikh Hasina handing out cheques of Taka one lakh each to the families of the three Bangladesh Rifles (bdr) personnel killed in the recent clashes with the Indian bsf. On her side was bdr chief Maj Gen Fazlur Rahman.

This was Rahman's first public appearance nearly a week after the Bangladesh government bungled in trying to distance itself from the bdr action in which 16 bsf men were killed. Maj Gen Rahman was then cast as a villain whose action didn't have prime ministerial endorsement. His 'rehabilitation' last week is seen as an attempt to placate the army which might have felt let down by the way Rahman was made a scapegoat.

The government's ambivalence over the bdr action, analysts say, could have adversely affected the morale of the troops. Says Maj Gen (retd) Moinul Hossain Chowdhury: "No sensible government should try to indulge in that kind of suicidal game."

More importantly, the television image, many believe, was an attempt to repair the damage caused to the ruling Awami League in general and the prime minister in particular. For supposedly being too eager to please New Delhi. This perception was further reinforced when Indian foreign minister Jaswant Singh claimed that the bdr had acted alone and without Dhaka's approval.

"This is extremely damaging to her political career and she can't afford to carry such a burden at a time when the election is just around the corner," says Shahidul Haq Munshi, a political scientist at Dhaka University.

In an apparent attempt to further allay public suspicion, Hasina praised the bdr personnel for their bold action to defend the border saying they acted in self-defence—an assertion intended to put the blame on the bsf for their incursions into Bangladesh.