NCB’s methods are under the scanner as experts punch holes in ‘panchnama’, arrest memo.

On October 2, the Narcotics Control Bureau (NCB) announced that it had raided a cruise ship in Mumbai and recovered party drugs from several people, including Aryan Khan, son of Shah Rukh Khan. Since then, the spotlight has shone incessantly on Aryan, with the NCB releasing details of his alleged history of drug abuse and his “connection” with international drugs traffickers.

The jury may still be out on Aryan, one of the eight people initially arrested in the high-profile case, but several legal experts Outlook spoke to expressed doubts over the NCB’s ‘case’, especially the ‘panch­nama’—the rec­ord of observation by two independent people, and hence an important legal document. Also under a cloud are the purported WhatsApp messages the NCB has cited to link Aryan to an drugs cartel.

Many have pointed out the similarities with the 2020 Sushant Singh Rajput case in which too the NCB had arrested his former girlfriend Rhea Chakraborty, who spent more than two weeks in jail. The case has since then gone cold. In that case too, the NCB had relied heavily on WhatsApp messages.

Among the many loopholes experts have pointed out in the Aryan case is the fact that the panchnama is silent on whether the NCB team frisked the youngster or if any banned substance was found on him. In contrast, the same document has details of physical search on others and the contraband found on them. Outlook accessed a copy of the panchnama in which Aryan’s search details have been mentioned along with four other accused—Vikrant Chhokar, Ishmeet Singh Chadha, Arbaaz A. Merchant and Gomit Chopra. Two witnesses—Kiran Gosavi and Prabhakar Roghoji Sail—have signed the panchnama.

“The panchnama should have mentioned that ‘he (Aryan) was searched and nothing was found on him’,” says Ashok Chand, former ACP (crime) who inv­estigated several high-profile cases, including the 2001 Parliament attack. “Also, there should be separate panchnamas for each accused,” he adds.

ALSO READ: Love, Respect, Awe: Look At Her Like Shah Rukh Khan Looks At His Women

According to the document, the search team first frisked Chhokar and Chadha and recovered Mephedrone (5 grams), cocaine (10 grams), charas (10 grams), 15 MDMA (6.5 grams) and Rs 40,0O0 in cash from them. The team then searched Arbaaz A. Merchant and Aryan Shahrukh Khan and recovered 6 gms charas from Arbaaz.

The panchnama merely states that, “On asking Aryan Shahrukh Khan admits that he also consumes charas and the charas (recovered from Arbaaz) was meant for smoke during the cruise journey (sic).”

The experts are of the view that Aryan Khan was named in the joint panchnama so that an impression can be made that he was part of a group that deals in drugs. “The very purpose for having a panchnama is of high legal significance. It is not a casual process and it is meant to rule out any wrongdoing by the official eff­ecting the seizure. Every step should have been mentioned in the panchnama in detail,” says Nishant Kr. Srivastava, founder and managing partner in Actus Legal Associates & Advocates, a Delhi-based law firm.

D.K. Garg, a Supreme Court lawyer, also calls the whole NCB raid a bogus exercise. “The panchnama shows that the raid was done to falsely implicate Aryan Khan. Were senior NCB officials unaware of the legal provisions of the NDPS Act and the importance of the panchnama?” Garg questions. Noted criminal lawyer and former additional solicitor general Sidharth Luthra was critical of the NCB: “When a public servant makes a record, he is duty-­bound in law to do so fairly and accurately and specifically when the liberty of a citizen is involved.”

The drugs consumption charges against Aryan too fell apart after a medical test confirmed that he was not under influence at the time of his arrest. “The negative medical report makes the whole case completely frivolous,” Garg adds.

Experts also point to ‘arrest memo’ on which Aryan was made to sign. The arrest memo det­ails drugs and cash seizure from other acc­used but Aryan was asked to sign on it. Experts say this create an impression of Aryan’s involvement. 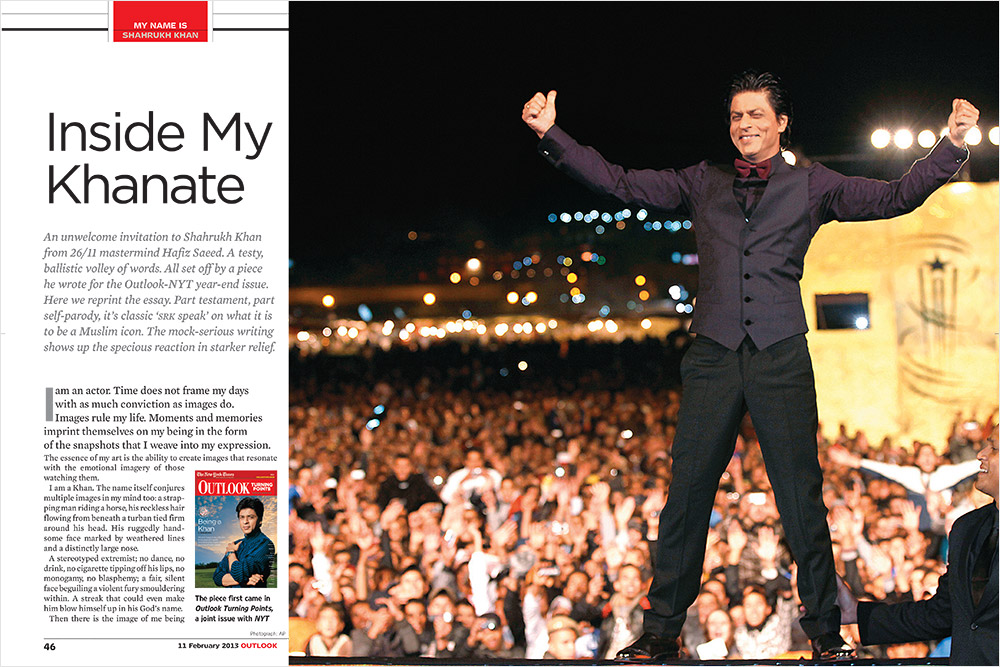 The Loneliness of Shah Rukh Khan

Excerpts from Inside My Khanate, SRK’s column in Outlook, February 11, 2013

"We create little image boxes of our own. One such box has begun to draw its lid tighter and tighter at present. It is the box that contains an image of my religion in millions of minds.”

"I became so sick of being mistaken for some crazed ­terrorist who ­coincidentally carries the same last name as mine that I made a film, subtly titled ‘My Name Is Khan (and I am not a terrorist)’ to prove a point. Ironically, I was interrogated at the airport for hours about my last name when I was going to present the film in America for the first time.” 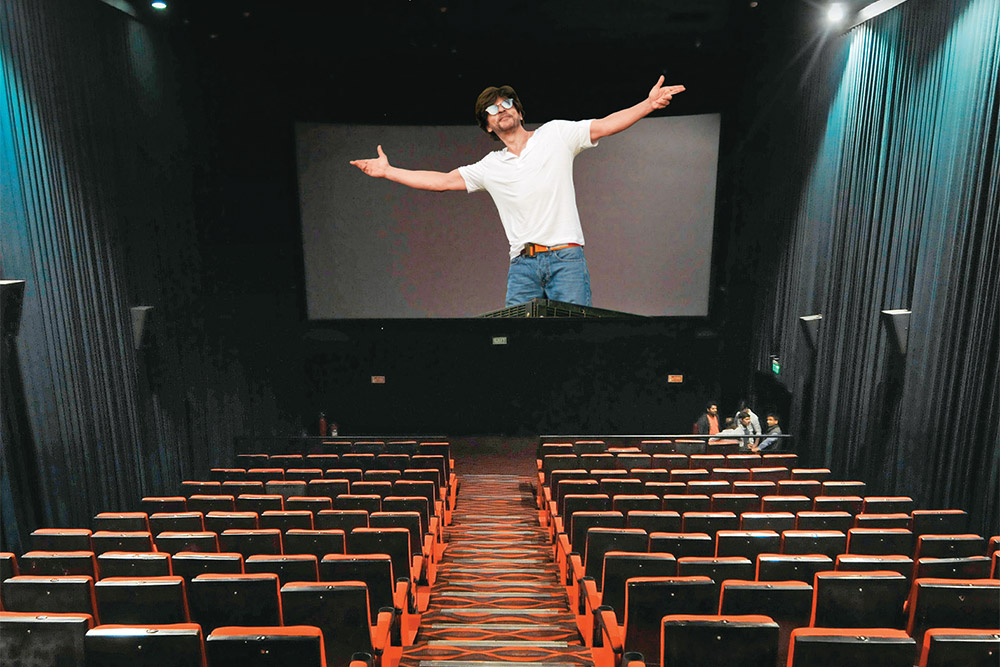 "I gave my son and daughter names that could pass for generic (pan-­Indian and pan-religious) ones: Aryan and Suhana. The Khan has been bequeathed by me, so they can’t really escape it. I pronounce it from my epiglottis when asked by Muslims and throw the Aryan as evidence of their race when non-Muslims enquire. I imagine this will prevent my offspring from receiving unwarranted eviction orders and random fatwas in the future.”

"Rallies have been held where leaders have exhorted me to leave my home and return to what they refer to as my ‘original homeland’. Of course, I ­politely decline each time, citing such ­pressing reasons as ­sanitation works at my house preventing me from taking the good shower that’s needed before undertaking such an extensive journey. I don’t know how long this excuse will hold though.”

"In our own small ways, simply as human beings, we can appreciate each other for how we touch our lives and not how our different religions or last names define us.”

(This appeared in the print edition as "Smoke And Mirrors")