Coronavirus Creates Hulchul In Bollywood, Can Industry Emerge From This Agneepath?

Even by conservative estimates, Bollywood stands to lose a minimum of Rs 500 crore in the first few weeks of the lockdown and it is just the beginning of a dark spell, something unprecedented in the industry 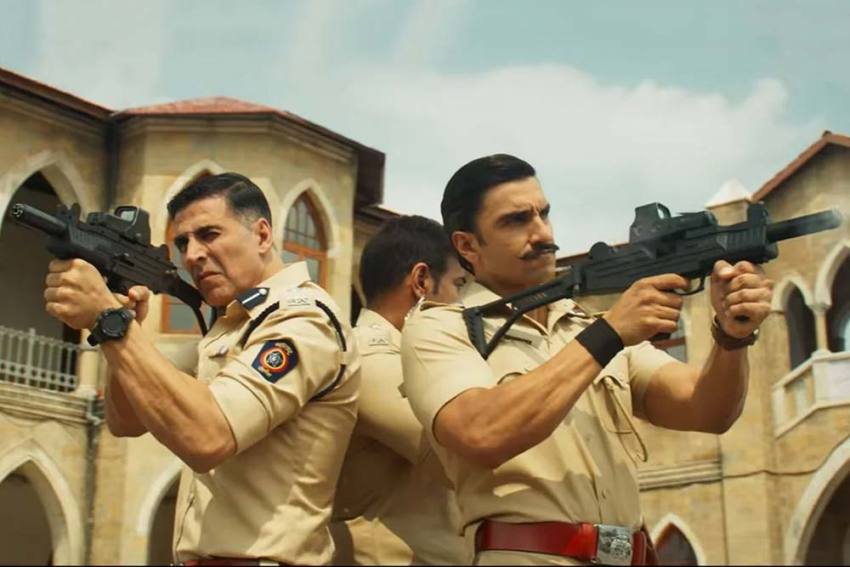 Casualty Of War
Akshay Kumar, Ranveer Singh in Sooryavanshi, the release of which was postponed
Giridhar Jha April 03, 2020 00:00 IST Coronavirus Creates Hulchul In Bollywood, Can Industry Emerge From This Agneepath? 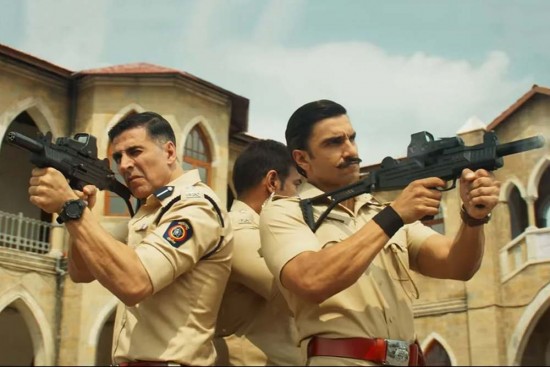 The cameras have stopped, and so have the entire universe that revolves around it, with its various, interdependent eco-systems—a near-biblical desolation. Not just Bollywood, the coronavirus scare appears to have infected the entire entertainment industry and it may take it months, if not years, to recover from the crippling blow.

As the rest of the world continues to grapple with a pandemic, the release of many a potential blockbuster has been put on hold. Shooting schedules of several big-ticket extravaganzas have gone haywire. So has consumption of finished parcels of dreams and nightmares—all theatres, single-screen and multiplexes, have been shut down. With the deadly virus wrapping its tentacles over the Indian film and television industry, it has caught dream merchants—from big studios to independent film-makers—unawares.

Film industry pundits appear to be at a loss to even fathom the magnitude of current and future financial losses befalling a sector where every weekend matters in the long term. Even by a conservative estimate, the entertainment industry stands to lose a minimum of Rs 500 crore in the first few weeks of the lockdown enforced by the Centre from March 25 to contain the spread of the contagion. It appears to be just the beginning of a prolonged, dark spell, something unprecedented in the industry.

Like the rest of the economy, the entertainment industry rolled on a practised smoothness when the catastrophe struck mid-March, and theatres began to be closed in one state after another. On March 2, a jubilant film-maker duo, Rohit Shetty and Karan Johar, had organised a mega trailer release of their upcoming ambitious multi-starrer, Sooryavanshi, in Mumbai with fanfare. Scheduled to be released on March 24, the Akshay Kumar-Ajay Devgn-Ranveer Singh-Katrina Kaif starrer was widely expected to be a blockbuster. Its trailer generated a hum of excitement, prompting many in the trade to believe that it would dispel the clouds of despair spawned by the lacklustre business of a string of Hindi movies in the first quarter of 2020. The new year had started off on a grand note, with a blockbuster like Ajay Devgn’s Tanhaji: The Unsung Warrior. Yet none of the other big tickets, including Tiger Shroff’s Baaghi 3 and Kartik Aaryan’s Love Aajkal 2 , were mega successes. Bollywood, therefore, had pinned a lot of hope on Sooryavanshi, oblivious of the deadening stasis that lay in store for it. By the second half of March, once theatres in lucrative markets, including Delhi and Mumbai, had to down shutters as per the directive of the respective state governments, Rohit Shetty had little option but to defer the release of the film indefinitely. 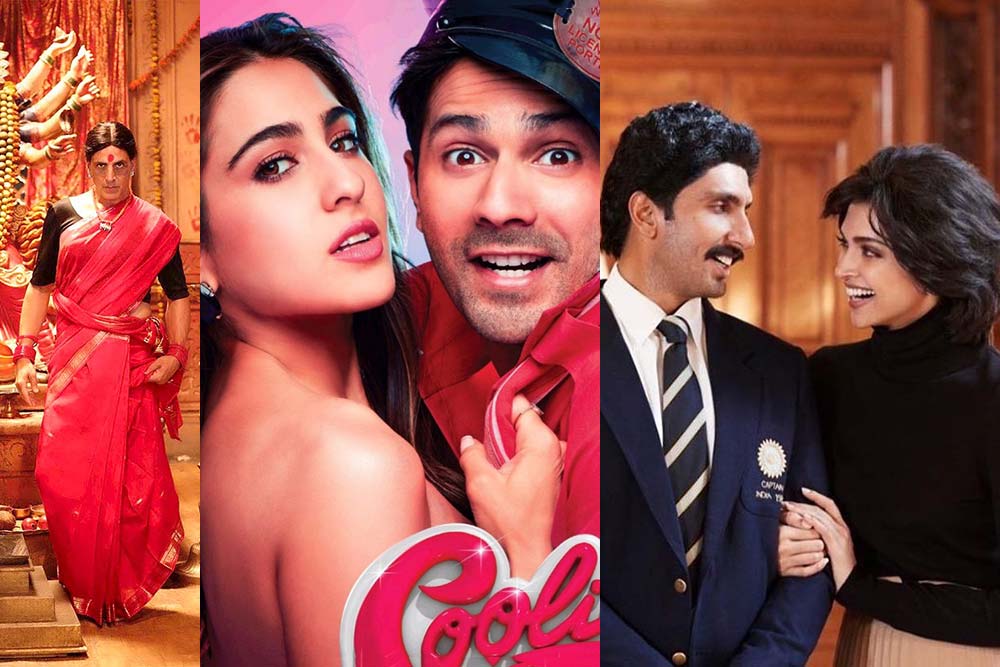 Films stalled midway include (from left) Laxmmi Bomb, Coolie No. 1 and 83.

“Sooryavanshi is an experience that we have created for you with over a year of dedication and hard work, and the response we received for its trailer was nothing less than electrifying and proved it truly belongs to its audience,” a statement from Shetty’s production house said. “But with the recent outbreak of COVID-19, we the makers have decided to postpone the release of your film keeping in mind the health and safety of our beloved audience. Sooryavanshi will be back for you just when the time is right.”

Analyst Joginder Tuteja says Bollywood will return to normality only in the last quarter of 2020.

Amid growing uncertainty, Sooryavanshi was not the solitary ‘blockbuster-to-be’ to be stopped in its tracks by the method needed to stall a lurking coronavirus. Kabir Khan’s eagerly awaited 83, based on India’s first cricket World Cup win at Lord’s in England in 1983, was supposed to open on April 10. It, too, has been postponed. Actor Ranveer Singh, who plays Kapil Dev, took to Twitter to announce the decision stoically: “83 is not just our film but the entire nation’s film. But the health and safety of the nation always come first. Stay safe, take care. We shall be back soon!”

The makers of 83 echoed him: “We urge our fans to take all the necessary precautions and take care of their loved ones. 83 is a film about fighting the odds and we hope we will all bounce back from this soon,” a statement issued by its makers said.

‘How soon?’ That is the question that weighs heavy on Bollywood filmmakers. When the entire country is sequestered at home, resumption of normal business in the near future looks a rem­ote possibility. Movie trade analyst Joginder Tuteja says Bollywood cannot expect to return to normality until the last quarter of the year. “Coronavirus has made a huge impact. Hindi cinema had done a business of Rs 4,300 crore last year but the scenario looks too bleak this year. In the first few weeks itself, Bollywood has lost over Rs 500 crore,” he tells Outlook. “Baaghi 3 and Angrezi Medium, released in March, have already incurred huge losses because of the lockdown.” According to Tuteja, ripple effects of the crisis will have a long-term impact. “The bigger issue facing the industry is whether audiences will return to theatres as soon as normality returns. I am afraid I don’t see that happening.” 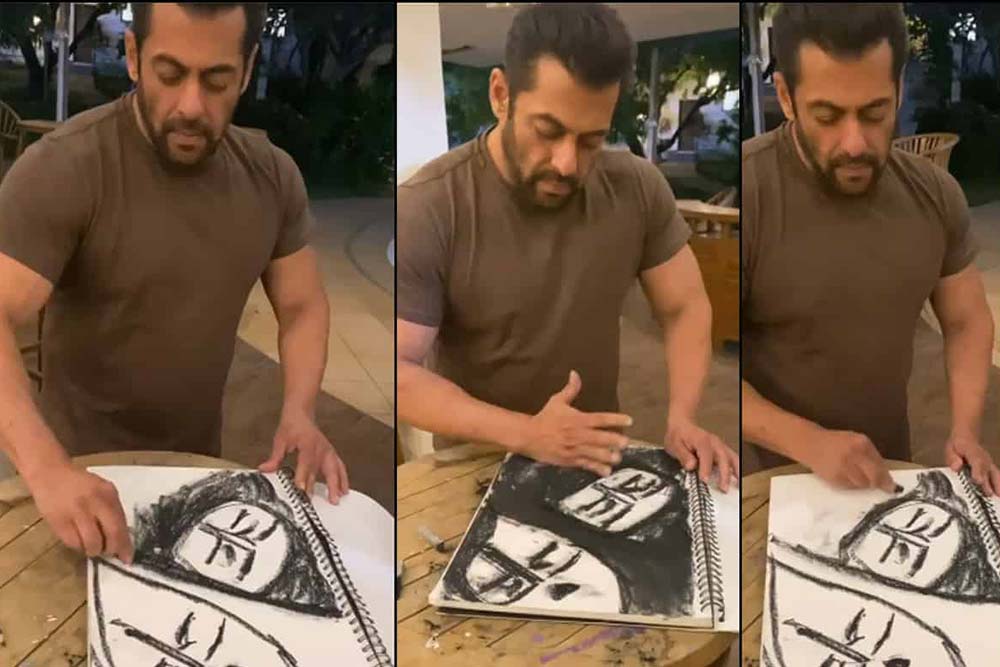 Portrait Of An Actor

Tuteja believes that the industry will have to rejig release dates of many movies in future because of the changed scenario. “There will be a scamper for release dates, but things are unlikely to improve until Diwali,” he adds.

But is the industry resilient enough to bounce back after enduring such a destructive tornado? Tuteja is hopeful. “There have been times in the past when no film was released for two months for reasons like strikes or the IPL tournament but it always managed to fight back by delivering good and hit movies,” says he. “This time around, Bollywood will learn from this unprecedented experience. From the revenue perspective, I think things should be fine towards the year-end.”

As always, daily wage earners bear the brunt of the industry lockdown.

From superstars to spot boys, the crisis has affected everybody associated with the entertainment industry. But, as always, it’s the lot of the common soldier to bear the brunt of a conflagration—Bollywood’s daily wage workers. Since all shooting schedules of movies and television shows have been suspended until the lockdown ends, they have been left to fend for themselves. Like their brethren across the economy, many of them have gone back to their ancestral places for want of employment and thus sustenance. The Producers Guild of India has promptly set up a relief fund the for daily wage workers but, given the situation, their woes are only likely to compound in the months to come as shootings are unlikely to resume soon.

Filmmaker Ankur Garg of Luv Films is mindful of the length of the shadow cast by these extraordinarily difficult times for the industry. “It depends on how long this period lasts. We have already lost many weekends and releases planned on those weekends will need to be accommodated,” he says.

Garg believes that while small-budget films may find a way in exclusive releases on digital platforms to recover costs or even make some profit in future, medium- and big-budget movies need a theatrical release to break even. “They will have no choice but to clash with other films on the same Fridays once the situation improves,” he says. “Also, considering the adverse impact this period will have on the overall economy of the country, viewers will have to decide how many films in a month they can afford to watch in theatres. All of it does not augur well for the film industry,” he adds.

Then there are mega movies stuck, cruelly, in medias res. They include Salman Khan’s Radhe, Akshay Kumar’s Laxmmi Bomb, Varun Dhawan’s Coolie No 1 and John Abraham’s Mumbai Saga, which were scheduled to hit screens in the next two to three months. With shootings or post-production work suspended, they will all miss their deadlines. The fate of many other movies due for release later this year looks uncertain too—shooting schedules are horribly off kilter. Industry sources say that getting the dates of stars such as Akshay Kumar, who are currently confined to their homes or farmhouses in and around Mumbai, will also be a big problem. At the moment, Salman Khan, for one, has chosen to fall back upon his old hobby of painting, while Saif Ali Khan is catching up with his reading. Others are busy reading piles of scripts or doing workouts at their home gym.

The stars patiently wait for the end of the extended staycation forced upon them by the Big C; the less fortunate cadge around for a living to feed their families, desperate for an end to their ordeal. The movies chose to forsake the once obligatory ‘The End’ in recent decades. They now wait passionately for its return.