After MGR made an announcement in 1950s, Mani Ratnam has finally assembled a team to make a film out of RA Krishnamurthy's famous book that has five volumes and about 2,400 pages! 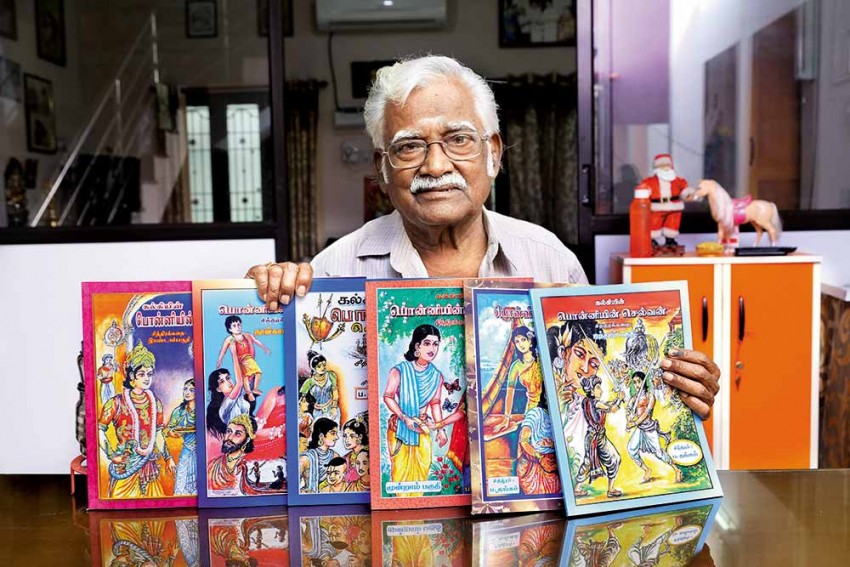 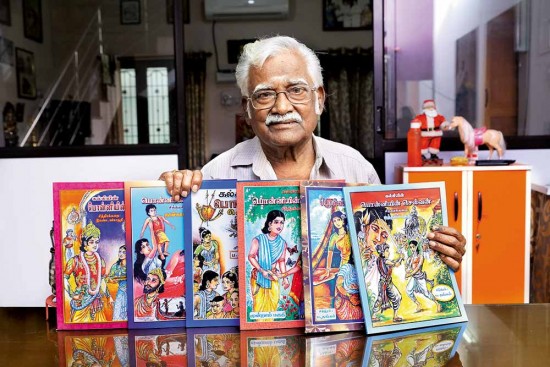 Some stories grow so big, they become inevitable. Tamil Nadu’s phenomenally popular epic novel Ponniyin Selvan (The Son of Ponni) is one such tale. The episodic novel written in the 1950s by R.A. Krishnamurthy under his pen name ‘Kalki’, for his weekly called Kalki, has been presented through various forms over the decades: stage plays, picture books, even an ani­mation series in recent years. But, a series of missed chances had still kept it out of the grasp of the formidable Tamil film industry.

It was, of course, not for lack of trying. Once, the legendary MGR had promised and even publicised a movie based on the novel. But things did not work out. After all, spread over five volumes and about 2,400 pages, Ponniyin Selvan is also a formidable tale to tell. MGR had made his movie announcement back in the 1950s. Now, in a new age, or should we say, the post-Baahubali age, Mani Ratnam has finally assembled a team to give shape to this mega creation with the shoot exp­ected to commence in 2020 once the cast, screenplay and pre-production preparations are in place. Like Baahubali, Ratnam’s magnum opus is also expected in two parts as it has to do justice to the long story line packed with twists and turns and the numerous characters (at least 40 main characters) without sacrificing the authenticity of the novel. 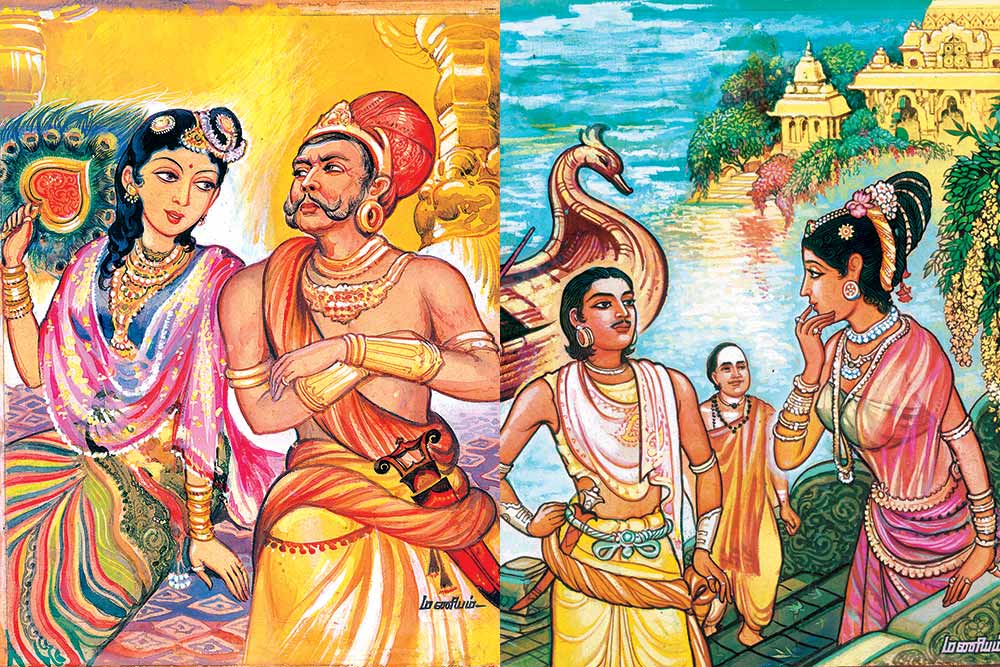 Artist Maniam’s artwork for the novel.

Ponniyin Selvan is a complex yet fine work of fiction that cleverly weaves incidents from Chola history. Kalki’s genius lay in enm­eshing fact and fiction and rarely letting the reader know which is which. For a filmmaker, to condense such a mega novel into a few hours will be truly challenging. Thankfully for Ratnam, a painstaking condensation exists: the template is available in the form of a three hour play that was written for the stage by Elango Kumaravel and was staged first in 1999 and later in 2015. It proved to be a runaway hit. Having honed his skills in the iconic theatre group Koothuppattarai, Kumaravel had translated his obsession with Ponniyin Selvan into a gripping play. Using a single set with different sections for shifting the scenes, Kumaravel had used narrators to overcome the constraints of time and space.

“My advantage was that Kalki had already served everything graphically and written the dialogues in simple spoken Tamil, eschewing the archaic form associated with historical stories. So it was easy to connect with the audience from the stage once they got into a state of willing suspension of  disbelief. Since the story travels from Kanchi­puram near Chennai across the Cauvery delta and even as far as Sri Lanka, there is enormous scope for a film to serve visual treats,” says Kumaravel, who is also writing the screenplay for the movie along with Mani Ratnam. 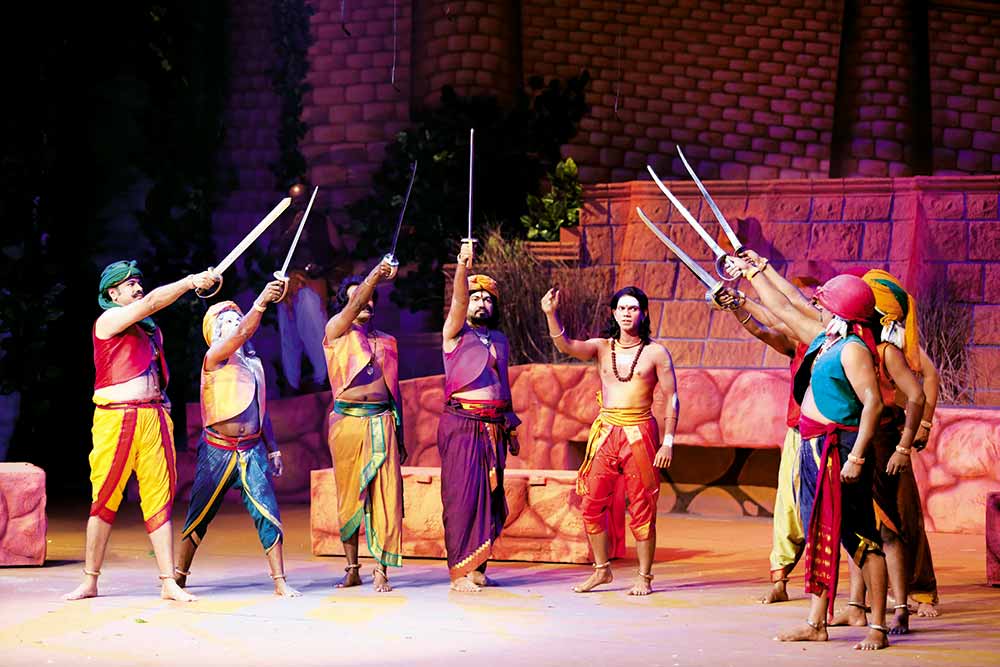 A frame from Kumaravel’s stage adaptation of Ponniyin Selvan.

The reason for the immense popularity of the novel was that it recognised the historical sacrifice of King Raja Raja Cholan (Arul Mozhi Varman in the novel), who gives up his claim to the throne for the sake of his uncle Utthama Cholan, whom he finally succeeds while in his forties. “It was one of the truly noble acts in Tamil history. Raja Raja Cholan went on to establish a powerful all conquering army, the administrative apparatus of a government and built temples and encouraged arts and culture, which made him one of the most celebrated kings of the south. Kalki combines the graciousness of this hero along with other players around him to spin a web of conspiracy and action. The novel used this historic connect with lively humour and also presented a fast travelogue of Vandhiyathevan, the main protagonist, who was actually a small chieftain,” explains A. Raghu­ra­man, retired Tamil professor.

As Kalki wrote the novel on a weekly basis—bet­ween October 1950 and May 1954—he had the entire Madras state (as it was known then) eating out of his hand, as readers waited with bated breath for their next weekly fix. “People would collect each issue, tear off the Ponniyain Selvam portions and bound them into volumes, to be rer­ead during holidays. These books in turn got passed on to succeeding generations to be dev­oured with the same passion. After its run in Kalki, the novel was nationalised and became the first choice for any new publisher entering the field since at least a few hundred copies would be sold almost instantly. Even today, it is the largest selling publication during the annual book fair at Chennai,” reveals Subra Balan, who has written extensively on Kalki’s works. 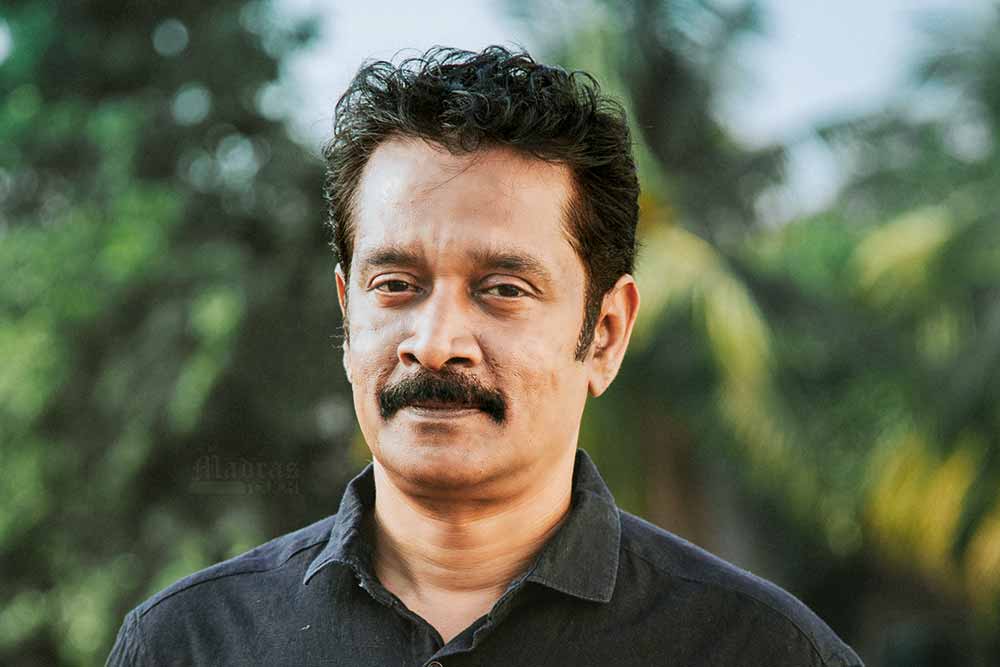 A three hour play was written for the stage by Elango Kumaravel (above) and was staged in 1999 and 2015.

Ponniyin Selvan’s influence can also be seen in people’s names: over the years, many parents named their children after the main characters in the novel such as Nandhini, Vanathi, Kundavai, Manimekalai and Arul Mozhi. P. Thangam, a photographer and artist at the Thanjavur Medical College went one step further and named his daughter ‘Ponniyin Selvi’, feminising the title. Thangam was such a big fan that after retirement, he went on to produce picture books of the novel, in Amar Chitra Katha style. He has been printing and distributing them at his own expense. “So far, I’ve done six volumes and plan to do four more. Yes it costs money, but I want children to get interested in this amazing work and a picture book is the ideal medium,” says Thangam.

Jayakumar Baradwaj, a Carnatic musician, was so taken by the novel he enrolled for his M.A. in History. Later, Baradwaj even organised a ‘Ponniyin Selvan heritage tour’ in 2009, probably the first ever such attempt. “I connected with PS fans over Orkut, which was the popular networking site those days, and starting from Kancheepuram, eleven of us travelled nearly1,600 kms  over 3 days visiting the places where the story unfolded. That was the spark which made me start my own heritage tour company which does trails of various dynasties that ruled the south,” he says. Jayakumar has also been drafted by Mani Ratnam to help with research for the film. 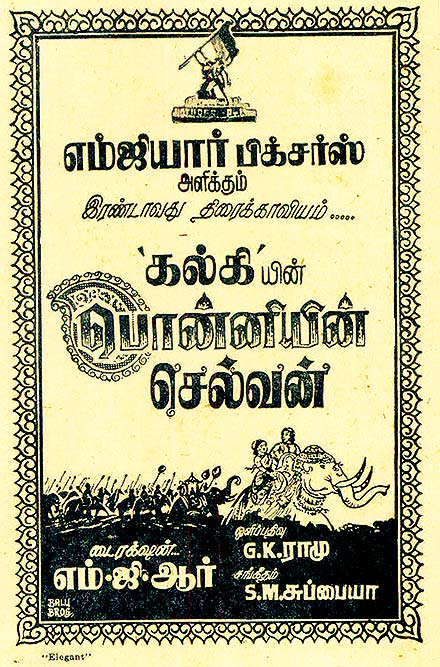 Artist Maniam Selven, whose father, Maniam, did the art for Kalki’s novel in the ’50s, says the novel made his father a household name and launched his artistic career. “Even today his portrayal of the women characters like Nandhini and Kundavai are fondly recalled by admirers of the work.”

Apart from Ratnam’s film, producer Soundarya Rajnikanth has announced a web series on the novel for the platform MX Player promising that nothing would be spared to mount the epic novel on the grand canvas it deserves. Soundarya is confident that the younger audience that is ­engrossed by international series like Game of Thrones would be inclined to watch the story if presented as a web series.

In 1958, MGR had taken out ads ­announcing that he would be starring in and directing Ponniyin ­Selvan.

Here’s hoping that both Soundarya and Ratnam’s projects see the light of day unlike earlier attempts to recast the epic novel. After the success of his film Nadodi Mannan in 1958, MGR had taken out advertisements in Tamil dailies and magazines announcing that he would be starring in and dir­ecting Ponniyin Selvan. “MGR wanted to cast Sivaji Ganesan, Vyjayanthi Mala and Saroja Devi while he himself would play Vandhiyathevan. But he was dissuaded by his brother M.G. Chakarapani who felt that Ganesan as Arulmozhi Varman, coming later in the film, would outclass him with his better acting skills. MGR also was unable to find a writer who could compress the movie into three hours and so he silently dropped the idea,” says a yesteryear producer requesting anonymity. Later, Kamalahaasan was heard thinking loudly about it too but did not go beyond that. 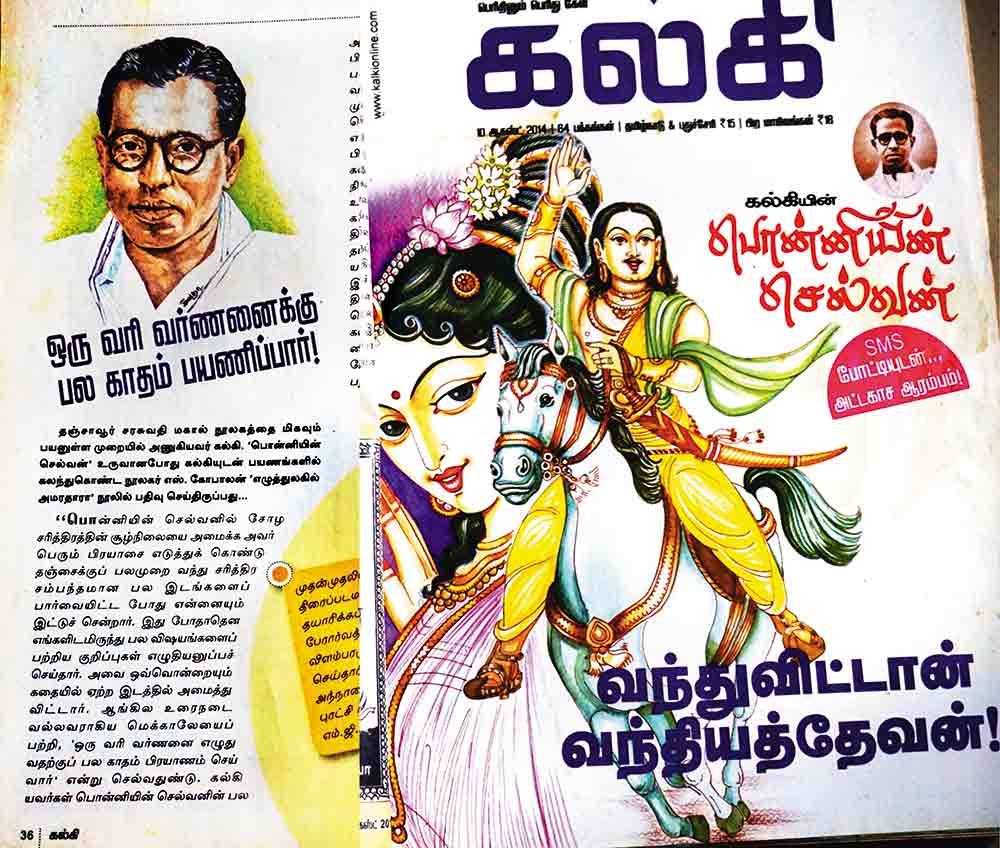 Krishnamurthy’s sketch (left); Kalki ­announcing a reprint of the series in 2014.

According to historian Venkatesh, who manages the Ponniyin Selvan Facebook group and anchors its annual meeting, the film’s first challenge would be to satisfy the thousands of hardcore fans of the novel who would be expecting it to be as close to the written version. “True, the demands of a movie will be different and some artistic licence would be taken, but we hope Mani Ratnam keeps the audience as engrossed as Kalki did six decades back,” says Venkatesh.

Ponniyin Selvan is a take-off on the real life power struggle between the two sons of Sundara Cholan: the elder, Aditya Karikaalan, and the younger, Arul Mozhi Varman (later he became Raja Raja Cholan-I). While Aditya Karikalan gets killed mysteriously Arul Mozhi hands over the throne to his uncle Utthama Cholan who rules for a decade. Kalki intersperses this story line with fictional characters inc­luding Nandhini, a Pandya princess, who wades into the plot to take revenge over the killing of Pandyas by the Cholas. The story is told mostly through the eyes of Vandiyathevan, a small chieftain and an ally of Arul Mozhi, who is also referred to by the locals as Ponniyin Selva since he was saved as a child from drowning in the river Ponni (Cauvery) by a mysterious force considered to be mother Ponni herself.

The story takes place between 10th to 11th century AD. Arul Mozhi went on to be crowned as Raja Raja Cholan and built the big Shiva Temple in Thanjavur. His son Rajendra Cholan marched his army up to Bihar and ret­urned with Ganga water to consecrate his Shiva temple in Gangaikon­dacholapuram. Rajendran’s navy conquered many South East Asian countries.