An exhibition traces the masterful unfolding of Jogen Chowdhury’s oeuvre 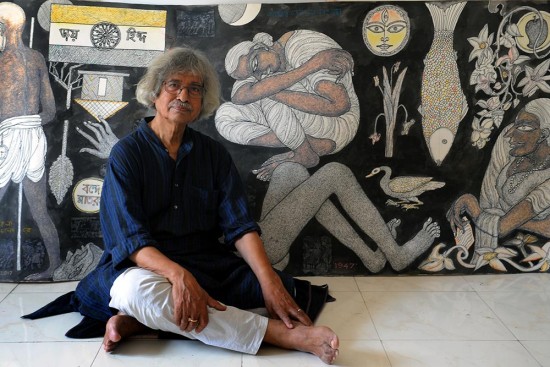 The interview starts on a rainy evening, with the thrum of cars in the background, as call after call is merged—an interviewer spe­­aks to an anxious PR person, who in turn reaches out to his calmer colleague further down the line to Shantiniketan—with silence. Finally, the interviewer asks, in a quivering voice, “Jogenda, can you hear me?”

At the other end of the much-media­-ted line is Jogen Chowdhury, a master of Indian contemporary art. An editor terms him “the last of the greats”; curator Uma Nair calls him a “modern master”. Anupa Mehta, curator for Calcutta’s Emami Art Gallery, says that he is an artist whose range and style creates an inimitable vocabulary. Chowdhury’s three-month-long solo exh­ibition, a select retrospective titled Reverie And Reality, curated by Ranjit Hoskote, opened in Emami Art on September 20.