A fusion of passion and good taste, MadRasana is finding new ways to take Carnatic music to the uninitiated 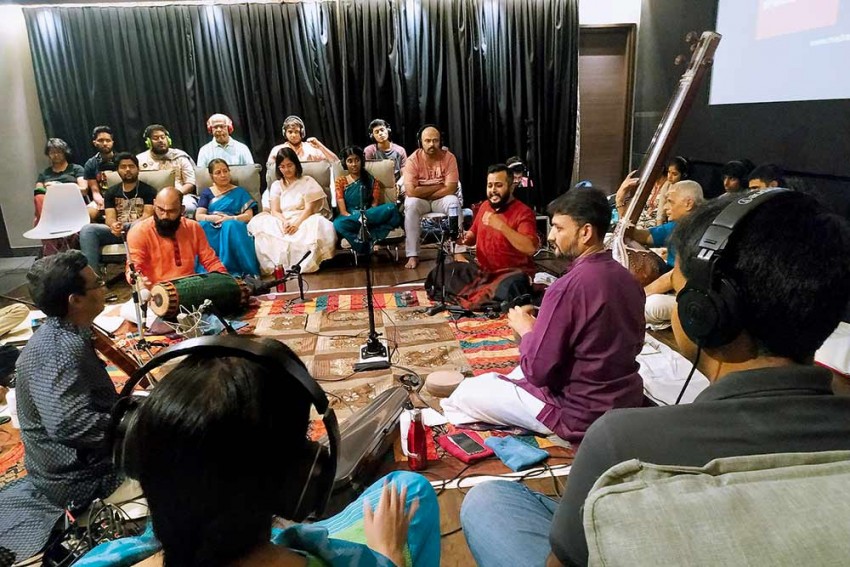 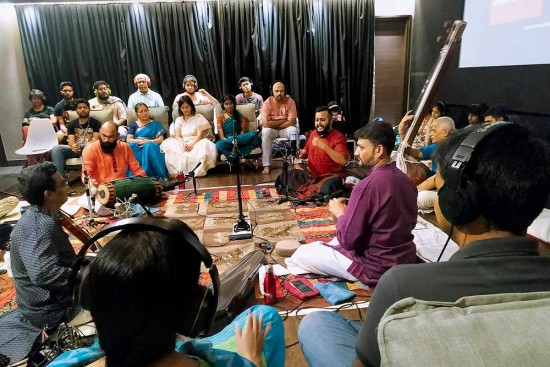 It is not the familiar, formal setting for a Carnatic music concert. The venue is a private theatre and the audience is seated just a couple of arms’ length around the performers. The musicians themselves are per­ched in the middle of the hall, facing each other from four corners of a small square, not in the traditional way of the main performer being flanked by accompanying art­istes. A 360-degree camera planted in the middle of this musical square would record the concert, to be seen on VR headsets later.

As soon as members of the audience plug their headphones into specially provided consoles and settle down in their cushioned chairs, singer Sandeep Narayan begins his concert, which is also a live recording. In three sessions of 45 min­­utes each, he and his team perform Carnatic kritis (songs) which can later be downloaded, to be listened while doing your workout in a gym or going for a jog.

Narayan’s soiree is Carnatic music’s latest format—the workout. On that Sunday evening an audience of about 45 rasikas participated in third session of the Carnatic Music Workout of MadRasana—an organisation that hosts Carnatic music on different platforms outside the confines of the mighty sabhas and concert halls.

Started by Mahesh Venkateswaran, a former MD of Cognizant Technology Solutions and Carnatic musician-turned-film-music-composer Sean Rol­dan, MadRasana has used innovative methods to take Carnatic music to new, often uninitiated listeners. The name MadRasana itself signifies many things—a mad passion for things that youngsters summon up, rasana for good taste and of course ‘Madras’, where it is all happening.

Roldan explains that Car­natic music is a connoisseur’s space and the sabhas that org­anise kutcheris in an audi­torium setting are still caught up in an aura of the past, even as young artistes hunger for newer venues, a different atm­osphere, even something as basic as a better audio set-up. “We are not changing content, just giving Carnatic music a lighter and more welcoming setting. It is like an old vintage that needs to be repackaged, since youngsters were not coming to concerts in good numbers,” he says.

MadRasana first started with recordings of young artistes for five-minute sessions, with only the ‘thamboora’ for accompaniment. The rec­ording quality was top notch; the production design, set in a traditional beach house, provided the perfect ambience. The unplugged series featured on YouTube and got excellent response. But the breakout hit was a five-minute konnakol (vocal percussion) by young prodigy V. Shivapriya, with veteran Somashekar Jois.

“While we considered the 10,000-plus views for other unplugged recordings as promising, this konnakol presentation attracted over 1,00,000 views. What happened next was just mindboggling: using this as the base American drummer Amir Oosman recorded a cover which got four million views. Another cover on this cover got eight million views. Then US-based Blue Devils company used it for its quads drums ensemble in a college show. Virtually unknown artists were plugging into our unplugged recording and building on it,” Venkateswaran says proudly. 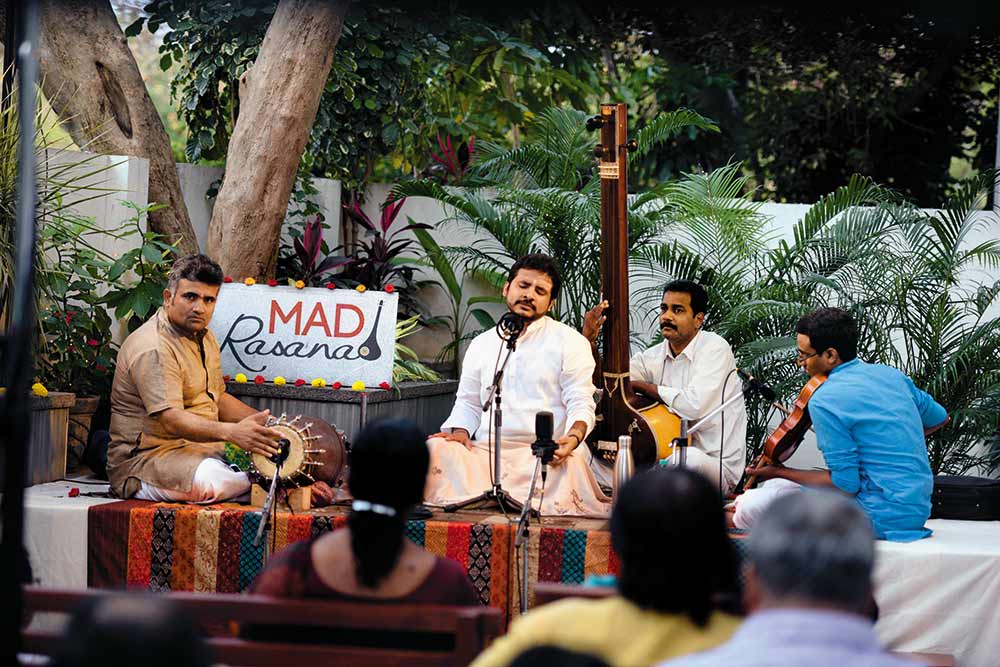 The Venkateswaran-Roldan duo then decided to hold live concerts at newer, non-sabha spaces. The first one at Alliance Francaise attracted such an ecl­ectic mix of listeners that Ramanarayan, editor of Sruti magazine, observed that for the first time he saw no familiar faces at a Carnatic concert—a new set had indeed turned up. Ven­ka­teswaran also sta­r­ted hosting concerts in his backyard garden ami­dst the call of parakeets from a miniature forest nearby. Even here he dispensed with the monitor speakers for the artistes so they could attune their singing more to what the audience heard rather than through feedback from the audio system.

The next innovation came during the December music season in 2018 when Mad­Ras­ana wondered: why not concert at a cinema hall? The owners of Sathyam Cinemas were receptive and gave one of their halls for a five-day morning concert schedule. A team readied the stage, audio and lights every morning for the 9 am concert, which had to be dismantled two hours later for the regular film shows to go on. “We had a full house on all the days and I was fortun­ate to have inaugurated the Sathyam festival. Not only was the atmosphere sur­real but it was heartening to see so many you­ngsters staying through the concert. They were hooked by the novelty of a concert at their favourite cinema and enjoyed it,” recalls Sandeep Nar­ayan.

A post-Sathyam survey amongst MadRasana members and the musical fraternity reve­aled that many listened to Carnatic music during their workout at the gym. “So when we asked if concerts could be recorded and tailored to suit their workouts, the response was tremendous. We decided to record Carnatic kritis in multiples of five minutes, making it easy to create a playlist. Then we wondered, why not make it a live recording, so it will be a new experience for both artistes and the audience,” expands Venkateswaran on the Carnatic workouts.

Singer Vignesh Ishwar, who did the first workout, found the experience exciting. “It was like having a conversation with the audience thanks to their proximity. And there was no chance of them missing out on the nuances, as they could hear eve­rything live on their headphones too,” he observes. At Carnatic workouts, musicians are encouraged to sing medium- and fast-paced kritis with only a short raga alapana during their three sessions of 45 minutes to match the varying speeds of physical workouts. Improvisations happen during the rec­ording itself—like when Sandeep started some kritis with the violin, which traditionally comes after the main singer’s presentation.

The workout sessions give the audience the twin experience of listening to a live recording as well as a chamber music concert. “If I removed my headphones I was listening to a chamber session; when I had the headphones on I felt like a music director monitoring the singers. We need more such healthy interventions to attract millennials,” observes Madhuvanthi, a music student. Roldan says MadRasana would like to try out Carnatic ensembles that weren’t att­empted. “Our young musicians are raring to go; only, we need to plan it pucca before presenting it to the world.”

The Mad And Exhilarating World Of MadRasana