Censorship Tandav Is A Serial Killer

Will regulation stifle the creative freedom enjoyed by the hugely popular OTT platform? The jury is still out. 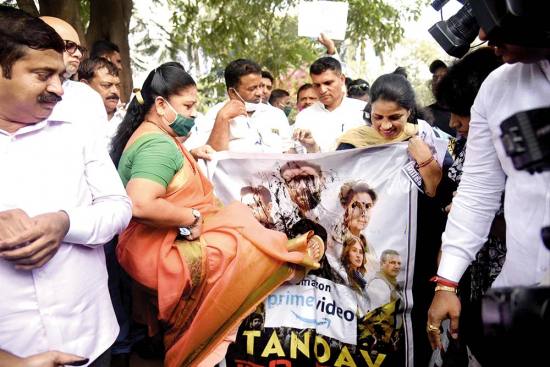 Tandav, Hindu scriptures tell us, is the cosmic dance of destruction, performed by the gods themselves to restore balance in the universe. In the human world, Tandav is but a web series, though it has left a trail of hurt sentiments and bruised egos across India, not to speak of a group of chastened film-makers and actors. Within days of its premiere on Amazon Prime Video, the web series ran into a storm of protests that forced its makers to “voluntarily” snip at least two scenes from the political thriller starring Bollywood hero Saif Ali Khan and issue a public apology for “unintentionally hurting sentiments” after the reported intervention of the information and broadcasting ministry. “The cast and crew of Tandav have made the decision to implement changes to the web series to address the concerns raised towards the same...We once again apologise if the series has unintentionally hurt anybody’s sentiments,” the Tandav team said in a statement. “We did not intend to hurt or offend the sentiments of any individual, caste, community, race, religion or religious beliefs or insult or outrage any institution, political party or person, living or dead.”

And yet, there is no end to their problems. On last count, as many as seven FIRs have been lodged across the country against Tandav’s cast and crew, who had to move the Supreme Court, seeking not only protection from arrest but also pleading to club all the cases and shift them to a court in Mumbai.  But there was no interim relief from the apex court on January 27. However, Tandav is not the only web show in recent times which has “offended” many people, mostly for hurting religious sentiments. From a seemingly innocuous kissing scene against the backdrop of a temple in Mira Nair’s A Suitable Boy to the alleged denigration of Hindu godmen in Prakash Jha’s Aashram, several web shows on OTT platforms have courted controversies in recent times. But none of them ever chose to, or forced to, edit scenes like the makers of Tandav.