Bored? Idle? Flipping channels for some late-night ambrosia? The idiot box is the last place you'll find it. 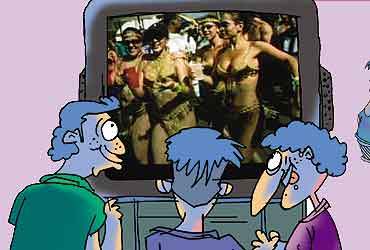 outlookindia.com
-0001-11-30T00:00:00+0553
The sudden memory of being woken up at 3.30 am by college friends chanting the magic word TB6 (for the uninitiated, a Russian channel that ran late-night Playboy TV shows until it was banned a few years ago) caused a nostalgia attack that made me decide to embark on an all-night TV-watching marathon to see what the 21st century has in store for the Indian night-time couch potato. Not a smart decision, in retrospect—for most of the night, I could have derived more entertainment from sitting on my couch eating a potato. While late-night cable TV does cater to people’s primal passions (sex, shopping, religion) there’s one thing that’s truly lacking—entertainment.

First up, sex. If it’s a flesh-feast you’re looking for tonight, don’t bother. We’re (fortunately or unfortunately) nowhere near western standards and apart from Bollywood and music videos (which play all day) cable TV has actually grown more conservative in recent years. At least, there’s very little distinction between late-night ‘adult’ shows (with names like Night Shift and Lots of Ladies) and the bilge that’s pounded into unsuspecting cerebellums at primetime.

What happened to MTV Grind, the 11 o’clock show that sustained thousands through the ’90s? There’s always FTV’s Midnight Hot, of course, but FTV brings Indian families the option of watching women walk around in their underwear 24/7, so why stay up late? Anyway, FTV-watching is more about relaxation than titillation—it reduces stress, since it’s the intellectual equivalent of watching goldfish swimming, but a lot more fun, and you don’t have to feed the models worms.

For the discerning voyeur, the must-see show is AXN’s Wild On (11 PM), which travels to holiday destinations and night-spots world-wide. Hosted by Playboy playmate Brooke Burke, this show boldly goes where Indian TV has never gone before, with a dazzling array of cleavages, carnivals and random (blurred) naked dancing people. From bikini-clad Filipino models learning beach volleyball to guest presenters who occasionally feel compelled to swim nude, this show has it all. Wild On, while pleasant in every way, made me feel old. I belong to a generation in whose teens a navel-flash on TV evoked genuine emotion. How easy life is for hormone-crazed teenagers nowadays. The question is—if it’s right in front of you, do you still want it?

For traditionalists, there’s always Baywatch; for genre enthusiasts, World Wrestling Entertainment action spectaculars with occasional ‘Bra and Panties’ matches (Ten Sports). And regional channels saturate your eyeballs with a range of off-beat titillation, from buxom couples frolicking in the sea in Alpha Bangla’s ‘mature’ programmes to the ever-reliable Udaya and Sun TV.

South Indian channels traditionally wooed late-night connoisseurs with the heady cocktail of massive thighs, garish colours and unique dance moves. Today, they’ve been reduced to normality—the actors cavorting under waterfalls are conventionally proportioned and occasionally even wear normal clothes. But the veneer of sophistication is a thin one—if you linger for a while, the old classics float slowly to the surface. Matching the south jiggle for jiggle are the Punjabi channels, led by the self-explanatory Balle Balle channel and mh1, the secret graveyard where abandoned music videos go to die. But overall, regional channels today have become so much snazzier that the unintentional hilarity quotient on TV has plunged even faster than the necklines. Will you have to stay up very late for all this intellectual entertainment? No, kind TV programmers have ensured all the fun’s done by one.

All night-time TV isn’t a mindless bog, though. There’s the occasional good movie and some watchable shows, spearheaded by Channel V’s Luke’s After Hours, a welcome break from the general tastelessness elsewhere. And there’s lots of random fun to be had—from Cameron Diaz teaching sailors to wolf-whistle on Jay Leno to dubbing melodramatic soaps in incomprehensible languages. I also discovered my new idols, kid’s icons the Boobahs on Pogo, who enthralled me by continuously twisting and squeaking for five whole minutes.

Relatively unknown TV channels are also potential entertainment goldmines. From a serious if incomprehensible discussion on Troy on Nepal1 (home of mega-serial Timi Purush), a random remote press took me to Care TV, which is a health channel where doctors are interviewed by blank-faced, nodding women. What’s on Care’s night-time specials? Pictures of cancerous tumours and worthy discussions on the lines of Let’s Talk: Masturbation and Sexual Desire in Women and the enigmatically titled Let’s Share: Impotency. Another two-digit remote-flick brought me to Animal Planet where two squirrels were enthusiastically trying to start a family while a solemn baritone voiceover intoned, "Procreation is given a high priority."

What’s also given a high priority on late-night TV is concentrated tele-shopping. Whether it’s Jackie Shroff hard-selling gems or Smriti Irani peddling Shree Yantra, network executives have evidently realised that semi-comatose night-owls are perfect targets to brainwash about various inane products from cosmetics to household appliances. The theory behind all this is very simple—the boredom nadir viewers reach eventually causes them to—a) not have enough energy to switch channels any more b) buy something just to have something to do c) feel like such losers that they actually believe Ab Energizers might improve their lives and d) kill themselves just to pass time, in which case the programme responsible gets free publicity.

Most of the night passed in a blur of changing channel numbers and increasingly hippo-esque yawns. I vaguely remember a huge woman in apsara costume on Sun TV and a naked woman dangling from a chandelier on FTV. What did wake me up was when, around dawn, I decided to do a comparative analysis of spiritual channels. While the rest of the world woke up to birdsong or hangovers, I trawled spiritual oceans for pearls. ETV has the funkiest preachers, but Etc has a scary man with a doll. Star World’s annoying Texan is an authority on fleshly gratification and if you’re into politics, the Believer’s Voice of Victory (Zee) spouts pro-Israeli propaganda and has a hilarious Hindi translator too. Zee News features a woman talking about St Peter’s attitude problem. To my delight, I also found her, dubbed on Surya TV (infinitely better). And don’t miss the topless, hairy breathing expert on Aastha. But the winner, hands down, is Sadhana TV, which I watched in horror as a man pushed a string into his nose, pulled it out of his mouth and proceeded to tug alternately at either end, while the approving sadhu next to him explained how this was a "sinus cure without operation."

A few lasting regrets—I missed all the shows I’d heard of—the much-hyped Zee MGM blurred-screen late-night movies, the legendary adivasi movies on Asianet, the Jawani/College Girl series on Star Gold, lurid Telugu songs on MAA TV. Also, it might have not been such a good idea to watch a close-up shot of a man’s quivering belly for a good two minutes on Etc. But the Ultimate Strangeness Award goes to Doordarshan’s morning Maths programme, which explains concepts like Euler’s Theorem to the bleary-eyed and mathematically challenged.

It’s called the idiot box, and I was watching it all night. There’s obviously a connection. Thinking of staying up all night watching TV? Here’s a tip: Don’t. Your dreams, even if you don’t remember them, will be far more entertaining. Either late-night TV is simply boring or I just didn’t know where to look.