Apple orchards are taking over the paddy fields of Kashmir. There’s promise and a fear. 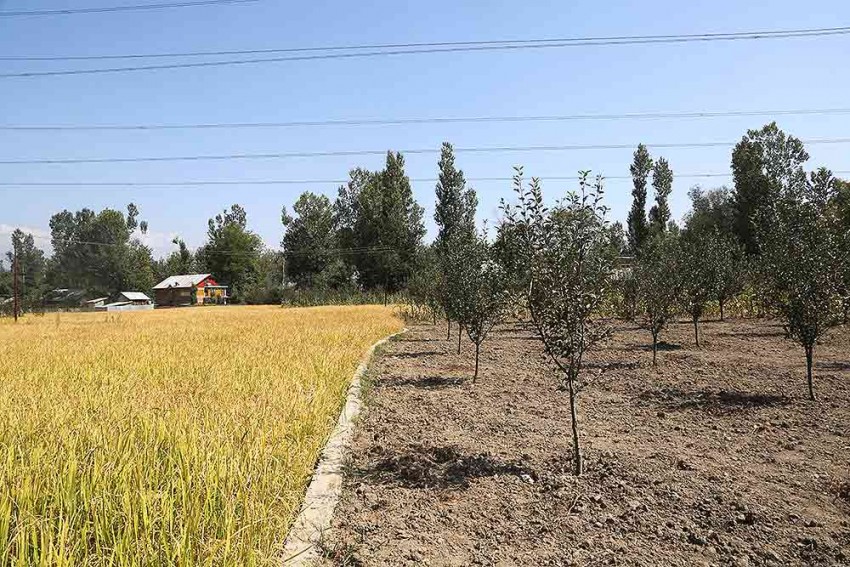 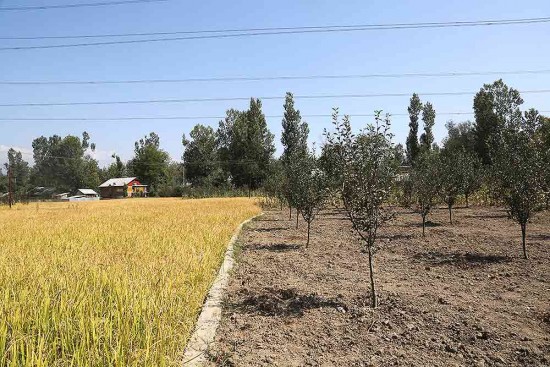 At Mohanpora hamlet, 15 km from Shopian town, a 52-year-old farmer Bashir Ahmad Dar is working hard at his apple orc­hard spread over 25 kanals (0.8 acre equals 1 kanal) with his wife, son and two daughters. They are busy selecting the best apples and packing them in crates to be sent to various states. Bashir recalls Mohanpora was once all agriculture land, where the farmers used to grow paddy. That began to change in the 1980s, with more and more farmers turning their rice fields into apple orchards. In 2014-15, rice production was pegged at 3.98 metric tonne (MT) per hectare, while last year’s apple production was 11.65 MT per hectare. With high-density plantation, apple production is expected to go up manifold in the coming years. The apple revolution took off despite the Land Revenue Act and the Jammu and Kashmir Agrarian Reforms Act pro­hibiting change of land use from agriculture to residential or horticultural. In the revenue records, the land in Mohan­pora continues to be paddy land. As the records have not been updated, the figures on land usage, cultivation and food deficit vary from department to department. In spite of variations in the rec­o­rds, though, the disappearance of paddy lands is visible in almost all districts of Kashmir division (one of the three adm­inistrative regions in Jammu and Kash­mir), except Budgam.

According to J&K consumer affairs minister Choudhary Zulfikar Ali, the state imports 7.51 lakh MT of rice from the Food Corporation of India (FCI) under the National Food Security Act and 5 lakh MTs from several states under various schemes. The state government doesn’t procure rice from the local farmers of Jammu and Kashmir as it is either for self-consumption or is sold to traders at higher than the government rates. Rice production in Kashmir division touched 5 lakh MT in 2008 and 5.61 lakh MT in 2011-12. And yet, Hunger in the Valley, a 2008 report by the Supreme Court commissioners, appointed to track hunger and the imp­lementation of interim orders in the Right to Food case across the country, showed the food deficit going up in the state that used to produce a surplus until 1990-91. The deficit reached 35 per cent in 2000-01 and the upward trend has continued since.

Officials attribute the deficit in rice production to climatic conditions that allow only a single crop a year in most areas. In the decades following the enactment of the Big Landed Estates Abolition Act under the Sheikh Abdullah government in 1950, landholdings became fragmented and people started shifting to horticulture in rural areas, while the paddy fields around Srinagar gave way to large-scale constructions. “We were not making enough from rice cultivation,” says Dar, who now owns a sprawling two-storey house. “Today, most of our relatives have houses in Srinagar.”

Kashmir’s apple story started in the 1950s, soon after the land reforms. In 1952, apple cultivation covered 12,000 hectares, entirely in Sopore area of north Kashmir. The setting up of the horticulture department 10 years later and the Sher-e-Kashmir University of Agricultural Sciences and Technology (SKUAST) in 1982 gave a boost to the transition. Land under horticulture area expanded to 2.19 lakh hectares, with 7 lakh families comprising 33 lakh people directly or indirectly associated with it. The area under apple cultivation touched 68,723 hectares in 1990 and 1.85 lakh hectares in 2016. Apple production went up to 17 lakh MT this year from 16 lakh MT last year.

Manzoor Ahmad Bhat, a senior official in the horticulture department, says the production figures are speculative, though based on inputs from the field—for example, the number of trucks transporting apples out of the state, counted at the Lower Munda toll post in south Kashmir. The 7 lakh apple growers in the Valley hire around 4 lakh labourers, mostly from outside the state, for spraying pesticides, plucking apples and packing them in crates.

Among the grievances of apple growers are inadequate cold-storage facilities and air-conditioned trucks to carry the produce to Delhi and other places in the off-season. Professor Shabir Ahmad, who heads the agriculture economics department at SKUAST, says there are 4.8 lakh apple trees among the total seven crore fruit trees in the Valley. “We export 8 crore boxes of apples in 1.3 lakh trucks. We must care about this Rs 8,000 crore economy,” he says, adding that the problem lies in a huge ­mismatch between the demand and supply of ­apples from Kashmir. In October and November, supply overtakes demand in two big markets—Azadpur Mandi in Delhi and the Sopore Fruit Mandi in Kashmir. That brings down the prices. “With proper cold storage during transport in summer, we could fetch better prices,” says Dar.

Experts say if agriculture land is lost at this pace, the profits may be big but a food crisis can’t be ruled out.

While an average of 12 trees grow per kanal, with the introduction of ultra-­high-density cultivation in 2016, the government has started providing 111 to 166 apple saplings per kanal to farmers for plantation. Many experts say rural Kashmir could be looking at prospects of major economic growth in the years ahead as the new variety is likely to yield up to 25 kg of apples per tree. “We will be ahead of the US if the farmers adopt it,” says Nisar Ahmad Ganai, horticulture officer at Rajpora, Pulwama district.

Not everyone is starry-eyed about the change, though. Some experts point out that if rice fields are converted into apple orchards and residential areas at the current pace, Kashmir could face food crises in the future. SKUAST dean Pro­fessor Farooq Ahmad Zaki says Jammu and Kashmir had a visionary policy in the 1950s that made conversion and selling of land difficult. It was aimed at self-sufficiency as those were times of food sca­r­city and transportation costs were much higher. According to Prof Zaki, much agr­iculture land has been lost to unp­lanned urbanisation, with large-scale migration from rural areas to Srinagar and other towns in the past 30 years contributing to it. “As every inch of land in Kashmir is cultivable, this kind of urb­     anisation is worrying,” he says.

Director Agriculture Syed Altaf Aijaz Andrabi argues, however, that agriculture and horticulture are inter-related activities and hence “we shouldn’t stop it”. His logic is simple: Punjab produces surplus rice and Kashmir can easily imp­ort it. “The roads are better now and a railway line is coming up. We shouldn’t bother about food security. Apple is bec­oming the mainstay of our economy and we should promote it,” he says.

According to Andrabi, the government’s focus is mainly on the high-­density ­varieties. In south Kashmir, also known as the rice bowl of the Valley, the ­agriculture ministry is enc­ouraging high-yield varieties of rice. The farmers, though, are in no mood to rely on rice cultivation.

Experts believe that a small push towards apple cultivation in Budgam district, 25 km from Srinagar, and friendly loans from the banks, could turn the district from one of the poorest in the Valley to one of richest. Admitting that farmers have been complaining that they are not getting the saplings, Director Horticulture Mathora Masoom says tenders are being floated to improve the distribution of the high-density apple saplings so they become available everywhere. “We are also coming up with a horticulture policy and a horticulture university will also be established,” says Masoom. “You will see how the rural landscape changes in the coming years.”

The countryside in Kashmir is changing with rice fields vanishing. “It is good for Kashmir if rice fields are replaced with apple orchards,” says Andrabi. “That’s where the money is. The farmers know it as well as the government. But we will not allow construction on agriculture land,” says Andrabi.

But, in case Kashmir faces a food ­crisis in the future, you know which fruit is likely to be blamed.

By Naseer Ganai in Shopian

The Jury Is Still Out