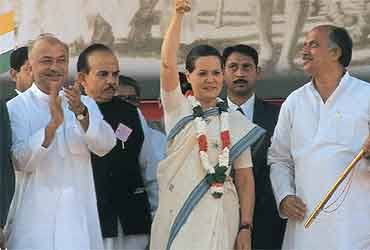 The most stiff-necked of parties, the Congress is now stooping to conquer. And the results are showing. After 24 frosty years the Congress and the dmk have buried the hatchet and announced an alliance in Tamil Nadu led by M. Karunanidhi. Apart from making overtures across the 'secular' spectrum, the newly media-friendly Sonia is working to recast her image—from that of a wronged widow to that of a credible leader.

Old habits die hard, however. The Pranab Mukherjee panel report on election strategy couldn't resist saying that although alliances are the order of the day, the Congress in the long term believes in one-party government. For now, it has set itself the task of cobbling together a credible formation "preferably within January 2004". Observes a senior leader: "In the next fortnight, you will see hard bargaining between the Congress and its proposed allies, to the extent that it may appear as if talks have broken down." Privately, Congress leaders acknowledge that the party, which contested 453 seats in 1999, will have to yield close to a hundred seats to allies this time. Publicly, they stick to the figure of 430-plus seats.