It won't be a cakewalk for Laloo. Self-belief aside, the voter wants a better life, a little law. Updates 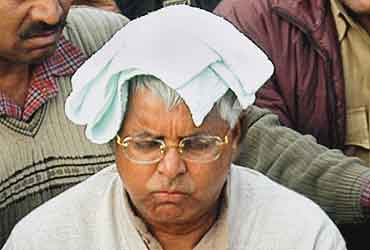 The netas are descending from the skies all across Bihar. As their choppers land on fields and school grounds, whirring up a small dust storm, villagers can be seen running across dirt tracks towards the udan khatolas (flying machines). The bare-feet children cower as the machine makes its final descent, clutching at the tattered cotton cloth that is often their only defence against the bitter January cold. The political circus has come to their village. If they are lucky there will be another chopper, another neta, tomorrow.

At one level, a Bihar assembly election can be seen as the theatre of the absurd with Laloo Prasad Yadav as the central performer. But at another level, it is a deadly serious contest in which blood has already been spilt. With politics now established as one of the most lucrative professions in this backward state, the stakes are high for the bahubalis (criminal strongmen) of Bihar. The strong Naxalite presence in large swathes also gives a certain edge to the electoral contest. Ideology too is always part of the churning in Bihar. The comrades, the socialists, the landlords, the criminals are all in the fray. But fundamentally this contest is about Laloo Yadav. You are either for him or against him. 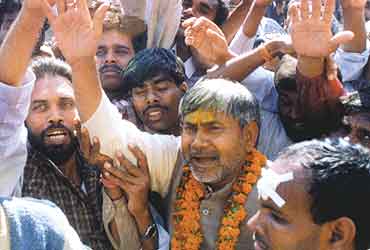 Laloo is a symbol of anarchy across India," says Arun Jaitley, in charge of the BJP's Bihar campaign: "He has converted vulgarity into politics. He has a conviction against development and thrives on creating a social divide." Exactly what JD(U)'s Nitish Kumar has been accusing Laloo of. Says his party colleague Digvijay Singh: "Laloo has destroyed and impoverished Bihar. But he is a clever politician. Our hope lies in the quiet anger of the people at the lack of development and lawlessness. Did anyone think the NDA would be defeated in Delhi?" Moreover, this year Bihar faced the worst floods since '87 that claimed 200 lives and devastated thousands more. There is certainly resentment at the grassroots.

So, is there a surprise in the offing in Patna? Or will Laloo Yadav yet again cock a snook at his critics and create a record of sorts by retaining power in Bihar for the fourth time? If he were to win a simple majority in the house of 243, it would be a huge victory for him, increasing his leverage at the Centre, and reaffirming his position as the uncrowned Badshah of Bihar, with wife Rabri Devi remaining the token chief minister. The more likely scenario is Laloo's RJD emerging as the single largest party. In both the 1995 and 2000 elections in undivided Bihar, Laloo had fallen short of the simple majority, eventually cobbling power after either splitting or gaining the support of other parties and independents.

What is significant about this election in Laloo's chequered political career is that the terms of the debate have shifted. Though in power in Patna for 15 years, he had always been an anti-establishment figure. In every election he had spoken the language of an opposition leader. He was ranged against the landed elite, the bureaucrats, the press, the judiciary, the Election Commission and later the NDA regime at the Centre. Kamala Prasad, a retired IAS officer who was Laloo's first chief secretary, recalls: "Laloo felt the civil service of Bihar was against him as many family members of his bureaucrats took part in the anti-reservation stir. I recall that in those days he also believed traditional development would only benefit the upper castes, either through leakage or manipulation".

But now Laloo is the establishment.That is why RJD posters declare: 'If development does not take place now, it never will'. Says Laloo himself: "From the beginning everyone was out to get me. They gave step-motherly treatment to Bihar to punish me. But now we are focusing on development." But Laloo's real talent lies in political management. Ultimately, the game in Bihar is about rallying social groups. Rues Rajiv Pratap Rudy of the BJP: "I don't want to be a Thakur leader. But here I can't escape it and Laloo does put us on the backfoot by identifying us with feudal forces."

So, the only way to corner Laloo is to chip at his own vote-bank. That is why Ram Vilas Paswan's attempt to garner Muslim votes is a genuine irritant. Laloo has found it necessary to get statements from little-known clerics and rushed to Imarat-e-Shariah, Bihar's main seminary in Phulwari Sharif. 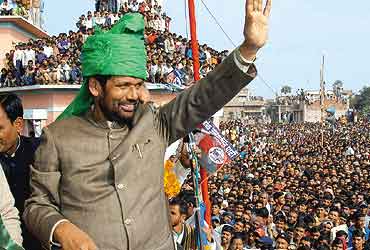 Meanwhile, taking his private feud with Laloo to the public domain, Paswan tells a crowd at Nawada: "One day he falls at my feet, the next day he grabs my throat." In every meeting he repeats: "Yes, Laloo has done a good thing by producing the Godhra report. But ask him whether he has punished those responsible for the Bhagalpur riots?" True, Muslims are turning up to hear Paswan in large numbers. And his LJP has given tickets to several Muslim candidates. But whether the early enthusiasm will be converted into votes remains debatable.

Laloo had once said that his voter is either working class or people who have no choice. The buzz in Patna is that with the BJP gone, Muslims no longer need to seek Laloo's protection. Now other considerations can determine their vote. Hence, if Paswan's LJP in alliance with the Congress in several seats (finally, the way it worked out, the Congress has an arrangement with the RJD in some seats and the LJP in others) can damage Laloo, then all calculations can be upset. But the problem with this scenario is that it is not yet clear whether the Congress wants to fight Laloo or simply contain him.

The RJD symbol—the lantern—is an appropriate symbol for Bihar where there is no electricity in most parts, where irrigation systems have fallen into disuse, where poverty and illiteracy is endemic, where pot-holed tracks are cruel excuses for roads, where crime is a claustrophobic reality. On the eve of the assembly polls, the relevant question therefore is whether Laloo alone is responsible for the mess Bihar is in?

Social analysts say that the historic roots of Bihar's problems lie in the fact that it was a Permanent Settlement state under the Bengal Presidency of the British. Indeed, most of the poorer parts of the country today were under this category of land settlement whereby zamindars were given the power of revenue collection by the British. The zamindars also dispensed justice and maintained private armies. The other Indian state entirely under the Permanent Settlement was West Bengal, but the Communists there brought about genuine land reform.

Nothing of the sort happened in Bihar. Instead, the oppressive feudal system created an intense social churning among the poor. That is why Bihar has been a ripe ground for several peasant movements as well as the socialist movement, in which a youthful Laloo Prasad cut his political teeth. Says social analyst and economist Shaibal Gupta: "Stories of landlord atrocities still abound in rural areas. Laloo's brand of cockney assertiveness has freed the people from mental enslavement."

Koath is a typical village, in the rural Rohtas district, without any infrastructure. Yet Shivjogi Singh, a Yadav farmer, says: "Laloo gave us dignity. Earlier we bowed before the upper castes. Now we hold our heads high." Similarly, Mansoor Ahmad is a political worker with Paswan's party in Nawada town. Yet he quietly admits: "After Bhagalpur and Gujarat, Muslims here say we may be poor but our women have not been dishonoured.Most will still vote for Lalooji."

Meanwhile, on a cold wet day in Patna, Laloo has wrapped a gamcha around his head. He is wearing a long woollen phiren over long johns and is crouched over a fire. Questions about Bihar's backwardness spoil his mood: "Did they dress up Bihar and give it to me?" he asks. The next day at a public meeting in Vikramganj block of Rohtas district, he tells the crowd. "They have dishonoured me, dishonoured Bihar, dishonoured the poor. You are the people who have saved me."

He has come to campaign for Akhlaq Ahmad, the sitting mla who switched from the JD(U) to the RJD just 20 days ago. Ahmad puts up a sofa for Laloo on the podium. He decorates the stage with marigold garlands, keeps refreshments of dry fruits and sweets along with mineral water. Then Ahmad is warned that the sofa is simply not Laloo's style. It is removed minutes before his arrival. Laloo strides on to the stage, pulls the marigolds off the garlands and chucks them into the crowd; the mineral water and refreshments are pushed away.

The poor and disaffected of Bihar touch all our lives. They are the labourers who toil at our farms and build our houses, the ayahs who raise our children, and all the other migrants who crowd urban ghettoes across India. Laloo's big achievement lies in understanding the mind of the poor. His failure lies in not bringing about substantive material gains in their life. It is the bare minimum expectations of his supporters that has ensured his survival. This, they feel, is more a failure of the Indian state than of Laloo Yadav.

Way To A Benign Empire