Empire Is Born In A Six By Four Cell 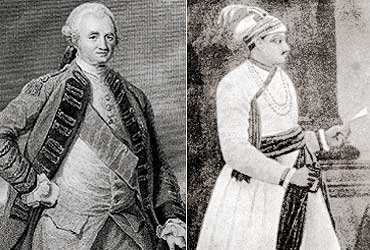 The coming year marks the 150th anniversary of the Uprising of 1857 and the 250th anniversary of the Battle of Plassey. The connection is not arbitrary, the fighters of 1857 were keenly aware of the significance of the Plassey anniversary and their preachers and ideologues enthusiastically played up the apocalyptic moment. When we attempt to celebrate these momentous events of modern Indian history, however, we are faced with a woeful lack of iconic images. What do we recall when we think of Plassey, merely the chagrin of defeat or worse, the Black Hole. What can we bring to 1857 that will match the stupendous mythology around Kanpur and Satichaura Ghat, the Residency and the relief of Lucknow? There are no episodes of last ditch stands, no display of individual heroism and valour, no markers, myths, figures or details on which to hang our fevered imagination. British Imperial mythology on the other hand, when you begin to probe it, is often less about glorious victories than accounts of defeat and dejection -- think Dunkirk, Khartoum, Kanpur, Black Hole -- which tells us how the most desperate imperial scare could end up, reworked into fiction, historiography and national myth, actually bolstering imperial self-confidence.

Amongst the most potent of those was the Black Hole. If you ask an average Indian, or a Briton for that matter, about the Black Hole today, he is more likely to mention to you the one in outer space. It is a measure of how our imaginative landscape and our national mythologies have altered in the last fifty years. Not too long ago, the Black Hole stood as the most ghastly symbol of native cruelty and Imperial triumph, of Indian treachery versus the never-say-die spirit of the British. Taught in school histories, in India and England, memorialised in novels, diaries, poems, plays, memoirs and letters -- school children in faraway Rhodesia in the 1890s performed plays on it -- the Black Hole was both event and metaphor, memory and reminder, symbol of disaster and supremacy and while the event has been forgotten, the phrase lives on in popular usage. Jan Dalley, British journalist and writer, investigates the event and its afterlife in a new book.