A study looks at Ashoka’s extant, physical heritage and celebrates his ideals as essential to the idea of India 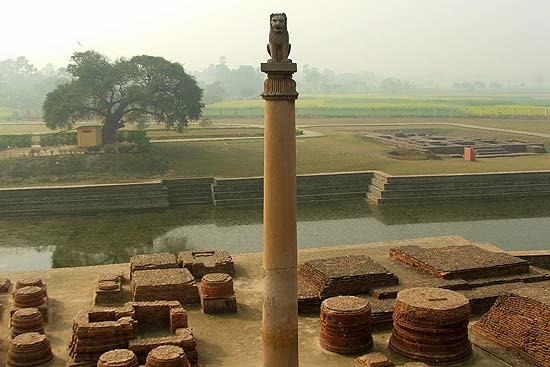 In contemporary quotidian life, communications can reach far corners of the globalised world within an instant. As we just about begin to make sense of this bewildering reality, Nayanjot Lahiri brings us to ponder upon messa­ges from beyond the last two millennia. Ashoka in Ancient India brings a voice of the past with rare acuity, its mes­sages conveyed within multiple narrati­ves of archaeology, religion, languages and political ideology, all held taut thr­ough the central theme of the life and times of the Mauryan emperor, Ashoka.

Initiating a welcome new genre of books in what could be best des­cribed as an archaeological biography, this book is a worthy successor, albeit in the textual form, of the British Museum’s pioneering exhibition on the Roman emperor Had­rian (AD 117 to 138). While Hadrian was known for his architecture, Ashoka (‘the sorrowless one’) is better known for his edicts carved on stone—strewn across the subcontinent from Afghanistan to Orissa and as far south as Karnataka. Whereas the exhibition brought mater­ial culture from Hadrian’s time to us, this book brings together the multiple narratives that make up Ashoka’s life.

Lahiri’s tracing of the story should put an end to the popular myth that it was the British who discovered Ash­oka. The book puts out fascinating instances from the beginning of the Common Era, when a memory of the Mauryan emperor and his faith were frequently invoked in myriad tongues (Sanskrit, Pali, Persian, Burmese, Chinese etc) and were being written about from Kashmir down to Sri Lanka and elsewhere. These appear in chr­onicles of later rulers across the subcontinent and in China, across dynastic histories and amongst religious texts for the Buddhist laity. However, what adds to this nuanced study of Ashoka’s life is a first attempt to trace his evolution as a per­son and as a ruler by deliberating over his own words, the change in voice and intent from his initial to final edicts, wea­ving a rich tapestry of ancient life.

Little is known of Ashoka’s final years. Unverifiable religious texts allude to a poignant death hastened by a jealous wife.

The progression of Ashoka’s ideas app­ears in sync with the vicissitudes of his rule. While archaeology is mined to reconstruct and provide context to Ashoka’s little-known early life, the book gives flesh and body to his latter life—from edicts that proclaim his zeal as a new convert to Buddhism, to his remorse after the victory over Kalinga. The use of different languages and scripts for these edicts, from Greek and Aramaic in Kandahar to Kharoshthi in Hazara and Bra­hmi over much of India and finally the use of his native Magadhi, ensured that his message was disseminated across the corners of his empire in languages that reached out to local communities.

Ashoka’s messages to his subjects and in time to us are spread throughout the subcontinent, though many of the chosen sites might seem unusual to us through 21st century filters. The messa­ges, though, were probably situated near places of residence or worship, alongside pathways and in the countryside and on hilltops that dominated the then landscape of his intended audience. His edicts over this varied terrain allow us a rare chance to understand his world and  his issues in dealing with different communities, communicating his ideas and how political exigencies of the time aff­ected the tone and tenor of his message.

Ashoka’s final years are also largely in the realm of conjecture, with most available references being from unverifiable rel­igious texts written centuries later and inten­ded to deify a mortal. These texts allude to a poignant death hastened by the machinations of a jealous wife. Ashoka’s memory in our collective consciousness is undeniable; his voice as seen in his edicts, in a rare departure, sought to consolidate his empire not just materia­lly but spiritually. In rapi­dly fading public memory, most of us associate Ashoka with having contributed to the creation of political symbols such as the Ashoka Chakra on India’s flag and the ado­ption of his sculptural lion capital as the natio­nal emblem. This book is a res­oun­ding reminder that bey­ond symbols, Ash­oka’s thoughts and deeds were considered an ideology much asp­­ired to and constantly invoked by Gandhi, Nehru and others when they deliberated on fou­­nding a new nation. Whether powers that be today would recognise the import of his message over the token incantation of his name remains to be seen.

(Pramod Kumar K.G. is an archivist and curator)