Well left! Why do Gavaskar and Shastri, Indian cricket’s trusty duo, board up on honest opinion? 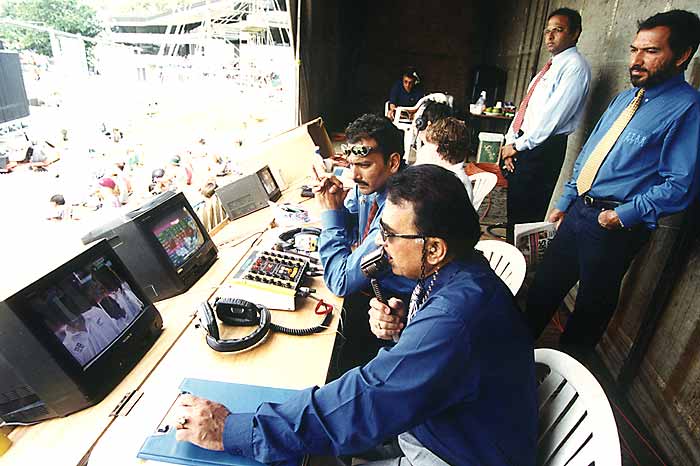 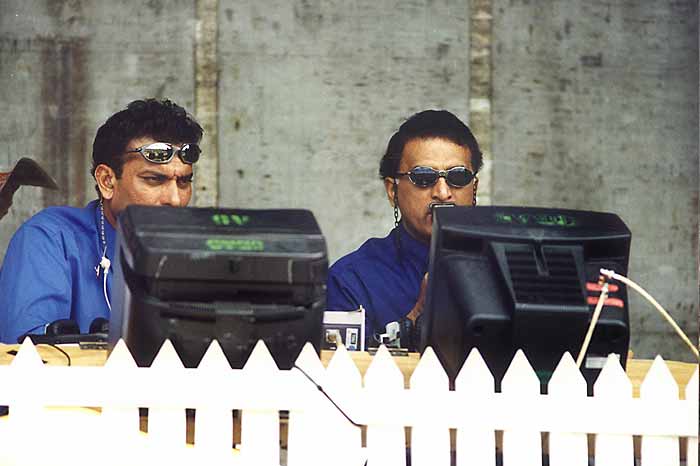 The Myriad Sins Of Gavaskar and Shastri

As India lost the first two Tests against England by massive, reputation-busting margins—196 and 319 runs—you must have rubbed your eyes in disbelief at the performance of the team you love to back. This wasn’t what you had expected of a series billed as a clash of titans. Only a few months ago, India had spectacularly lifted the World Cup; it was crowned the No. 1 Test team late last year. So, really, what happened in England? To find answers to this, you must have been all ears when Sunil Gavaskar, Ravi Shastri, Sourav Ganguly and Harsha Bhogle voiced their views and analyses of the matches on the TV commentary by ESPN Star. You’d imagine that the credentials and credibility of this team of commentators could never be doubted.

Now, here are some facts, which you are likely to have overlooked in the gloom after India’s disastrous performance. One, Virender Sehwag played with a shoulder injury in the IPL, and possibly exacerbated the injury, necessitating surgery. Two, Zaheer Khan didn’t tour the West Indies because he was injured; he broke down with hamstring trouble on the first day of the series. Three, India got only one match to prepare for their most difficult challenge of the year—taking on England in England in a Test series. Four, half the team arrived in England from the West Indies; other key members, including Sachin Tendulkar, joined them from India. Five, the Indian Test team hadn’t played together for months. 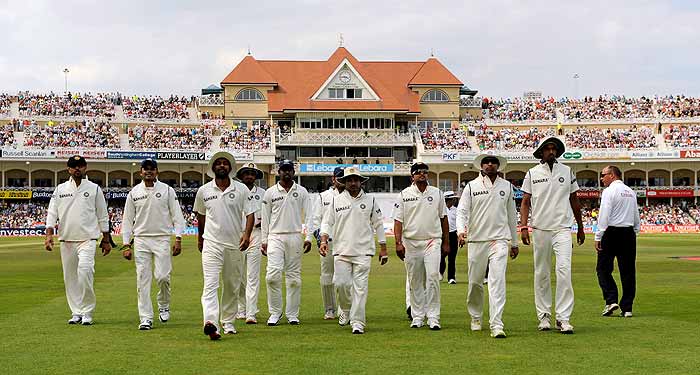 This was right, that was right Indian players leave the field for tea after Bell was given out at Trent Bridge. (Photograph by Reuters, From Outlook Magazine August 15, 2011 Issue)

These facts severely indict the Board of Control for Cricket in India, which hasn’t nurtured its players, shielded them from injuries, kept them motivated, or given them enough time to adapt to unfamiliar English conditions. Former English captain and ESPN Star commentator Nasser Hussain said India had no respect for their No. 1 ranking. “It’s evident that some of India’s players are suffering from exhaustion of non-stop cricket whilst others are unfit despite being rested before the series.” This is the consensus among observers in England.

Now think hard and count the number of times you have heard the Indian commentators dissect the reasons behind the absence of Sehwag or the injury to Zaheer or the exhaustion of other Indian players. Shouldn’t the widely acclaimed observers of the sport—Sunil Gavaskar and Ravi Shastri—have at least questioned the BCCI’s penchant for having a packed calendar, hosting the IPL just days after the gruelling World Cup campaign and then following it with a West Indies tour? But Gavaskar doesn’t think an excess of cricket is a problem for the players. He said as much in his column: “There will be talk about preparation etc, but even if this Indian team had played five first-class games before the Test series they would have struggled as the technique is not there.”

Gavaskar is entitled to his opinion. But as a keen follower of the sport you must have felt a tad betrayed to hear Gavaskar and Shastri discuss at some length, as India collapsed in the second innings in second Test, the suitability of Mumbai’s Wasim Jaffer for the opener’s slot in the Indian team. And no, not the reasons why that spot had become available in the first place.

Gavaskar and Shastri won’t discuss such matters because of one crucial—and unmentioned—fact. Wonder what that is? 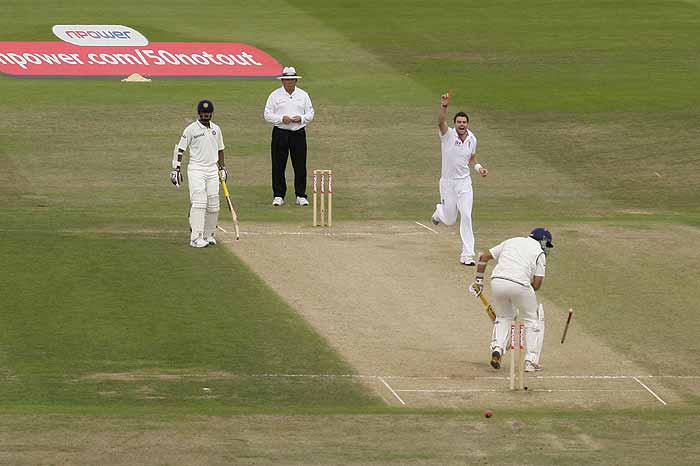 Gavaskar and Shastri are contracted by the BCCI for an annual fee of Rs 3.6 crore; the contract, quite crucially, is renewable every year. It entitles them to be on the commentary team at the events on Neo TV channel, rights-holders to BCCI-owned tournaments, and also at two other BCCI events—the IPL and Champions League T20 tournaments—the broadcasting rights for which are held by Sony Set Max and ESPN Star respectively. Is this then the reason why they are wary of raising issues that trail back uncomfortably to the BCCI, ask troubling questions of it or even criticise it? Can money influence people’s ability to speak the complete truth? Could pecuniary considerations colour their views?

Gavaskar’s former teammate, Kapil Dev, is deliberate in his choice of words: “If it is true Gavaskar and Shastri have a contract with the board, then it is their job to look after its interests. Why should they speak out against the board? Will anyone in Outlook write against Outlook? Will a Congress minister speak against his party in Parliament?” he told Outlook. Gavaskar admits there is a conflict of interest arising from his contract with the board and his role as commentator, but justifies it saying this phenomenon is commonplace in life and one could be honest in spite of it (see interview).

The channels, it seems, don’t have a choice in the matter of hiring Gavaskar and Shastri. They also provide them professional fees, independent of the BCCI’s payment. Says Harish Thawani of Nimbus, which owns Neo and produces cricket feed for BCCI, “Regardless of the arrangements they have with the BCCI, we pay the market fee to hire them, which is between Rs 50,000 and Rs 1 lakh a day.” Thawani says they’re happy to have Gavaskar and Shastri on board. “They are very professional, eloquent and among the best commentators in the world. Who wouldn’t want to hire them?”

Gavaskar explained to Outlook how the contract with the BCCI came about. Until 2008, Gavaskar and Shastri were working with ESPN Star (ESS) for a long time. Then the IPL was launched, and they were roped in by Lalit Modi for commentary. But they were not directly contracted with the BCCI—they were contracted with the World Sports Group, which in turn signed a contract with the BCCI to provide services for the IPL. When Modi was kicked out of the IPL and the BCCI last year, all decisions made by him were reviewed and the deal with the wsg was cancelled. The BCCI then signed up Gavaskar and Shastri directly. Pointing to the conflict of interest, a source said, “They won’t criticise the BCCI anyway—and certainly not on ESS, for which they work for BCCI at the Champions League.” 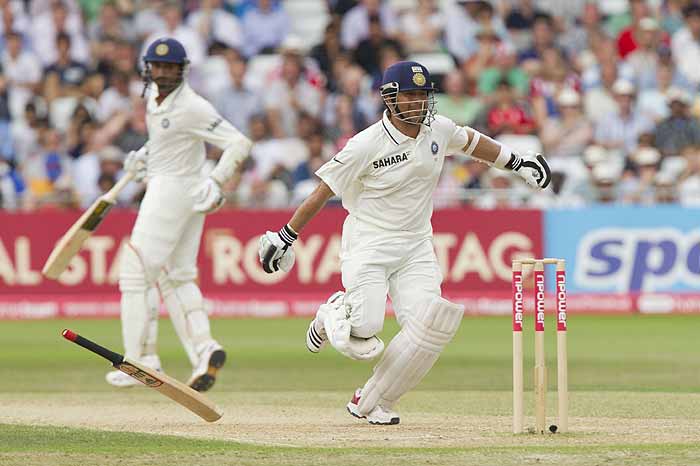 Tendulkar during his second innings knock of 56 at Trent Bridge

Gavaskar claims the BCCI doesn’t prevent him from speaking his mind. But those familiar with the contract say that it follows a standard format, reiterating clauses one usually finds in agreements reached between two contracting parties. One of the clauses reportedly states that the two commentators—Gavaskar and Shastri—can’t work at cross-purposes with the BCCI. It’s time for the BCCI to clarify whether such a clause exists and whether it has the power to stifle them.

All these factors have increased the danger of the commentators turning into defenders of BCCI policies. This seems to have happened with Shastri, who didn’t respond to Outlook’s attempts to talk to him. The dashing commentator was a member of the icc’s Cricket Committee, which, in May this year, unanimously recommended the use of Decision Review System (drs) in all Tests, odis and Twenty20s. He never raised a dissenting voice then. But, as a commentator, Shastri is a vehement, aggressive opponent of the drs. During the second Test, he said on air that those who criticised India’s opposition to drs were jealous of its success. This led to a sharp exchange, again on air, with his colleague in the box, Nasser Hussain.

“Every commentary box in the world has its share of supremacists and propagandists, England and Australia no exception, but it’s extraordinary that the Indian board has made it institutional,” says Rahul Bhattacharya, cricket writer and novelist. “I look forward to the day that our recent retirees, Anil Kumble, Sourav Ganguly, Javagal Srinath, and those soon to join them, become our pre-eminent opinion-makers.”

But as of now, Gavaskar and Shastri are the biggest voices in Indian cricket, the greatest of opinion-makers—and they don’t seem to be doing their duty. “It’s obvious that India are under-prepared for this tour,” a Test cricketer-writer with a large British newspaper told Outlook. “Half of them came straight from tour, some of them landed from India. The warm-up game was a disgrace. Yet there has been no explicit criticism of the BCCI for the scheduling by the two official commentators.” He further says that Sehwag could have had an operation early but opted to play on in the IPL. Ditto with Gambhir and Zaheer. “The BCCI can control this situation, but it’s not doing it. Gavaskar and Shastri don’t criticise this. And Shastri voted for the ICC Cricket Committee resolution on drs, didn’t he?” he asks. “That’s plain nonsense, isn’t it?”

Bishan Singh Bedi, a plain-speaker all his life, believes it’s absurd for the board to employ commentators. Bedi told Outlook, “It’s impossible for these guys to be neutral, unbiased! If the BCCI shifts its position on the drs, will these two also change their minds? Forget Gavaskar and Shastri, they’re just two individuals. There’s a greater problem when an institution behaves like this. The BCCI is being run in an irresponsible manner.” Mr Bedi, there goes your chance of a Rs 3.6-crore contract.

There’s been a sort of collateral damage in this embedded-commentator scenario—Harsha Bhogle. His proximity to the chosen two is affecting his image, though he’s not done commentary for events owned by the BCCI after 1999, except the IPL. He’s doing commentary for the England-India series, for ESS, which doesn’t own it. Bhogle says that it’s not his style to impose his views on the cricket expert, or to contradict or disprove him. “I cannot have an agenda, no anchor should, because my role is to be the viewer in the studio and present as many points of view as possible,” Bhogle said in a written statement to Outlook. “An anchor cannot be loud and opinionated, and so whether I agree or not with the views expressed in the studio is another issue.” Possibly this style, with no overt resistance to the views presented by the two experts, leads to him being tarred with the same brush.

Gavaskar has been seen as a defender of India in several forums for years—to be fair, when no one spoke for Indian cricket, he did. That perhaps explains his strident nationalism, veering towards jingoism, a style out of vogue in commentary boxes, as journalist Simon Wilde suggests (see box). He believes a TV channel shouldn’t hire commentators contracted to a cricket board, “not unless it gives them permission to publicly express reasoned and reasonable criticism of board policy should they wish to do so. They should also be obliged to state, when discussing board policy on air, that they have a potential conflict of interest as they receive payment from the board.”

Social commentator Santosh Desai says the system is to blame for the embedded commentators. As he told Outlook, “They’re paid to offer an opinion, but they’re unable to do so because they’re deeply compromised. But they’re in an industry, they’re part of a process of generating money. They then must glorify their paymasters. They can’t criticise them. The BCCI is a banana republic, it answers to no regulatory body.”

Peter Roebuck, cricket columnist, says the “conflict of interest is widespread in cricket—it’s not an Indian preserve.” But he says, in every part of life and in every country a fearless and independent media is needed to call power to account. “Where conflicts of interest exist, that is not possible. TV wants to sell its product but that ought not to require suppressing the critical faculty.... You cannot hunt with the hounds and run with the foxes,” he says.

Perhaps in the BCCI you can—at least some do.

Here, There Be Dinosaurs... Cataracts, Warts And All