Eddies In The Teesta 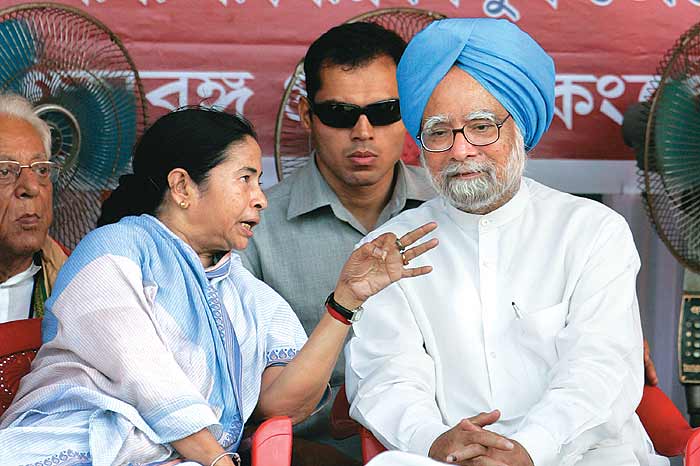 In the end, Prime Minister Manmohan Singh’s carefully choreographed and much-anticipated visit to Dhaka didn’t deliver the expected all-round success. No doubt, India put on the table a lavish set of agreements to bolster Bangladesh’s economy and Prime Minister Sheikh Hasina’s domestic position, but what soured the mood during Manmohan’s visit last week was New Delhi’s failure to offer a conclusive deal over the sharing of the Teesta waters. Apprehensive of the Opposition exploiting the contentious water issue, Hasina thought it prudent to withhold the decision granting India access to the Chittagong and Mongla ports, which would have helped easy movement of goods to the Northeastern states from mainland India.

Former Bangladesh foreign secretary Mohiuddin Ahmed says, “All the goodwill suffered a serious setback following India’s inability and unwillingness to sign the Teesta water-sharing agreement. It will take time for trust and confidence to return.” Nazmul Ahsan Kalimullah of Dhaka University was even harsher: “India gave too little, too late.”

West Bengal CM Mamata Banerjee has been blamed for scuppering the Teesta agreement by pulling out from the prime minister’s delegation to Dhaka at the last minute. Mamata is said to have told the Centre that she was opposed to the quantum of Teesta water being assigned to Bangladesh, as it would be at West Bengal’s expense. New Delhi, however, claims the agreement adhered strictly to the redline Mamata had drawn. This was at least the line most people in Dhaka bought, obvious from what Kalimullah told Outlook, “Bangladesh was denied an agreement on the Teesta because of Mamata’s arrogance.” 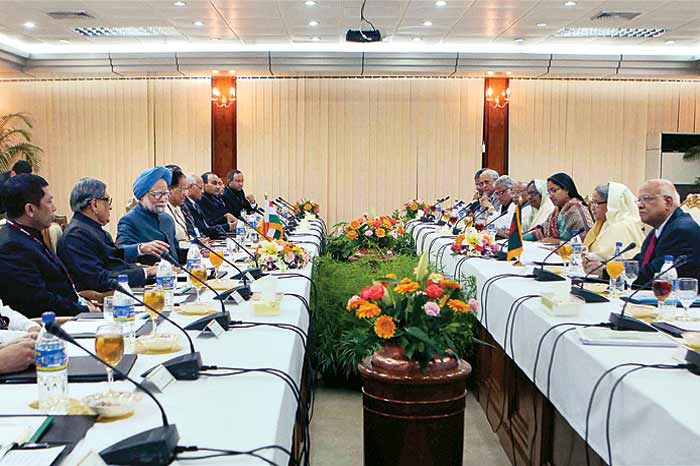 Given the multiplicity of versions about talks between the Centre and Mamata, it’s impossible to tell who’s at fault. But they point to the confusion prevailing before Manmohan’s departure. BJP leader Yashwant Sinha cautions, “We should sort out our internal differences beforehand. When we negotiate with another country, India should speak as one.”

So was Mamata being cussed? No, argues West Bengal public health engineering minister Subrata Mukherjee, who told Outlook, “We are all for good relations with Bangladesh and don’t mind sharing Teesta waters with it. But you cannot expect us to do it by turning the northern part of our state (through which the Teesta flows) into a desert.”

South Block, however, maintains that the proposed agreement took into account West Bengal’s position that it couldn’t give Bangladesh more than 25,000 cusecs of water from Teesta. The Mamata camp points to a crucial complication, saying she turned recalcitrant as soon as National Security Advisor Shivshankar Menon told her that Bangladesh was to get 33,000 cusecs, that the additional 8,000 cusecs from her imposed limit of 25,000 cusecs were to come from Sikkim, from where the Teesta originates. Mamata wasn’t willing to accept the Centre’s assurance, saying she couldn’t agree to the proposed formula of sharing the Teesta waters in the absence of an agreement between Bengal and Sikkim.

Mamata’s cautious approach was influenced by West Bengal’s experience in the years following the signing of the 1996 Ganga Water Treaty between India and Bangladesh. Though then CM Jyoti Basu had given his assent, he soon realised that the sharing of water had adversely affected the flow of the Ganga at Farraka. This was because West Bengal as a lower riparian state couldn’t, in the absence of a formal agreement, prevent Uttar Pradesh and Bihar from ‘overdrawing’ water from the Ganga. In other words, Bangladesh’s guaranteed share was ultimately at West Bengal’s expense.

Mamata was also wary of the Left, the BJP and even the Congress exploiting the sensitive water issue to push her on the backfoot. Though CPI leader Pallab Sengupta wants India to be generous to Bangladesh because of its “geostrategic importance”, neither he nor other Left leaders were willing to commit themselves to a ratio for water-sharing acceptable to them. The reason is simple—no party would want to be seen supporting a deal militating against Bengal’s interest. There was also talk in the state of Congress leaders initiating a movement against Mamata once she gave her consent to the proposed Teesta agreement. Perhaps this was mere speculation, but a keen sense of survival meant Mamata wasn’t willing to provide room, even hypothetical, to her opponents.

Perhaps Mamata’s prickly relationship with the Congress also prompted her to adopt a recalcitrant attitude. For instance, when pleading for a special financial package for West Bengal from Finance Minister Pranab Mukherjee, Mamata was asked to draw up a budget that could enable her to raise revenues internally too, leaving the Centre to keep its aid to ‘reasonable’ limits. The subsequent package also fell below her expectations. The Mamata camp also thought the Congress was being less than honourable in its negotiations. This was because of the attempts of the Congress, which she felt was at Pranab’s behest, to include Congress leader and Bengal irrigation minister Manas Bhuiyan in Union water resource minister Pawan Bansal’s delegation, which was supposed to sign the Teesta treaty a day before Manmohan was to arrive in Dhaka. Fearing that the treaty was being offered to her as a fait accompli, Mamata firmly told Manas not to join the delegation.

So is the Teesta treaty (and that for the sharing for the Feni river waters) dead? “It is better to eat a meal that is fully cooked than rushing to have one that is half done,” Mamata reportedly told her associates. This provides hope of Delhi and Bengal renewing negotiations over the contours of the Teesta agreement. Once the new deal is stitched, Mamata could travel to Bangladesh and assure its people of her desire to forge closer ties between the two “Bengals”. But Bangladesh’s Kalimullah isn’t hopeful of a prompt solution: “The Indira-Mujib agreement was signed in 1974 but took 30 years to implement. It may take another 30 years before the Teesta river water agreement is implemented.”

But for the Teesta agreement, India and Bangladesh made great headway in settling the legacy from the past. They demarcated their land boundary, pending since 1972, identified all the “territory in adverse possession”, agreed to exchange the 162 enclaves, and removed over 60 tariff barriers to give Bangladeshi goods greater, freer access to the Indian market and laying down the groundwork for movement of goods and people between the countries and in the Eastern region.
Yet these multiple gains didn’t register emphatically in the popular consciousness, unaccompanied as it was by the Teesta’s murmur.

By Pranay Sharma in New Delhi and Saleem Samad in Dhaka