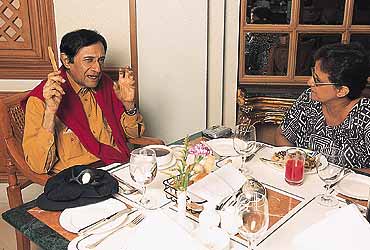 outlookindia.com
-0001-11-30T00:00:00+0553
With typical dev may care attitude, Devsaab asks me to choose any restaurant close by. He’s busy with post production work on his latest film, Love at Times Square, and can’t let his train of thought be interfered with for long. Knowing his love for the good things of life, I decide to head for the newly-refurbished Taj-Land’s End. We decide on the coffee shop rather than the more elaborately done-up Chinese restaurant. Devsaab, as we all fondly call him, is visibly pleased with the choice. "This is nice!" he approves. But then Taj does everything with a touch of class.

Dev Anand has the entire staff eating out of his hands. As soon as we’re seated, he finds out the name of the steward on duty. That, of course, makes Sunny melt. It is these touches that make Devsaab one of the most well-loved stars of the country. But no amount of coaxing can make him order a full meal. He asks for some hot water as aperitif and then goes for soup—a chicken consomme. I too decide to go healthy and settle for the delicious array of salads.

Dev Anand, the producer/director/writer/ editor, is preoccupied with his forthcoming release. However, his unfailing interest in everything around him makes him curious about Outlook as well. "How long has it been in business?" he asks. "Seven years," I say. "It looks like it’s going to beat every other weekly in circulation," he opines. With him, it’s not unusual becoming the interviewee than the interviewer.

He confides that Love at Times Square has five music composers. "I’m looking at releasing the film’s music in New York and inviting some influential people there," he says. The film’s cast has newcomers along with Salman Khan. Why him and as what? "He plays himself," reveals Devsaab. Ask him about the title, and he waxes eloquent: "If you go to America, you have to visit Times Square and on a Saturday evening because on that evening, the glow of the neon signs and the rush of humanity from the world over makes the place what it is," he says. The film takes off from an incident in 1964 when Devsaab was spending the New Year’s eve in Times Square. Does 9/11 too make part of the film? "No, but you can’t forget it. The film touches on the subject but doesn’t deviate towards it completely. It’s a love story that begins on New Year’s eve at the turn of the century, goes on to span the entire year and ends at 12 midnight on next New Year’s eve," he says. He’s even releasing it this New Year’s eve!

Devsaab sips his consomme and talks of his habit of skipping the midday meal. He feels it keeps him healthier, disciplined and more agile at work. However, breakfast and dinner are two meals he eats heartily. We wind up the small meal and walk out in high spirits. That’s what Devsaab’s company does to you—gives a bounce to your walk. There’s more excitement in store for us as we walk out of the door. Who should walk in but a pretty, slim lady we couldn’t immediately recognise. But her singsong call—Devsaab—gives her away. It is none other than the Dev Anand find, Zeenat Aman. Both look delighted at having run into each other and he pats her affectionately on the cheek. It’s a perfect end to a happy hour.