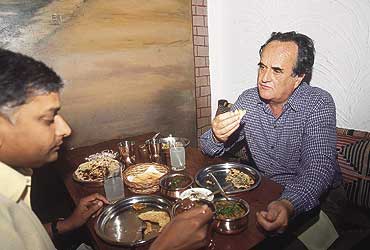 outlookindia.com
-0001-11-30T00:00:00+05:53
The best place to take Mark Tully out for lunch—before and after his knighthood—is perhaps a dhaba somewhere on the Grand Trunk Road. You can choose any location between Kolkata and Lahore. But since he is busy editing a travel documentary on the famous road built by Sher Shah Suri, we decided to eat at the urban ‘Dhaba’ at the Claridges hotel in Delhi. The hotel holds a deja vu appeal for Mark because he stayed here when he first came to India in 1965. Also, after Indira Gandhi threw him out of the country during the Emergency, his second coming to India too started with The Claridges.

It was a long lunch because the conversation, as expected, traversed from how to cook perfect gobhi aaloo to the sociological significance of the Godhra massacre and from the anthropological evolution of balti gosht to the budgetary proposals of Yashwant Sinha.

Though both of us would have preferred a dusty setting on the roadside for a gup-shup session, Claridges’ Dhaba does try hard to be the real thing. There is a replica of a truck inside and the chairs are woven with jute used in charpoys. But the similarity ends there. Any self-respecting dhaba owner, anywhere in the country, will slap you with green salad and paapad before you can say appetisers. But Mark saheb had to boom "Arrey paapad lao" before we got the munchies. The menu too was a bit disappointing. There was no gobhi aaloo, Mark’s staple, so he had to settle for gobhi parantha. I preferred a kadak roti. Both of us went for the balti gosht as if by instinct, something we had habitually shared at London’s Indian or Pakistani restaurants: Kohinoor, Gaylord or Lahore Kebab Centre.

Mark says the balti gosht in the Frontier cuisine is cooked in a kadhai with vegetables thrown in. However, the balti gosht available in England is lamb cooked in gravy—which may have been born somewhere in the bylanes of Birmingham or Ealing Broadway. The balti gosht at Delhi’s dhaba had a new twist to it. It tasted like the kadhai chicken we had ordered with it. Maybe the gravy was similar for both. And the clincher to this theory came from the aaloo-paneer-matar, made specially for us, which tasted like the other two dishes. "That’s the biggest problem with this cooking," said Mark, as if screaming Eureka. "These people are driven by gravy which kills the taste of other ingredients." Well, we cut our losses by finishing with aaloo paranthas with plain yoghurt.

We both agreed that standardisation of cuisine is a worldwide taste spoiler. Mark calls it the "McDonald syndrome": "Everything comes with yellow gravy or curry floating in cooking oil," he pointed to his plate. Maybe it’s the Punjabi culture which dominates everything in India and among the NRIs — from gravy to celluloid marriage melodramas. "It must be difficult to get a good khansama for an excellent Kayasth meal from UP," we agreed. But that’s also true of beer in Britain. Bottled cousins are flooding the pubs and you really have to fetch hard for your pint of favourite bitter, McEwan’s or Abbots. However, Mark always stays away from beer over lunch, because "it kills your yearning for that evening tipple". We decided to skip dessert. We’d rather get our calorie intake from a cold beer in the evening than a cold dessert.