Their young have colonised Manali. Now Israel tries to wean them off the drug trail. 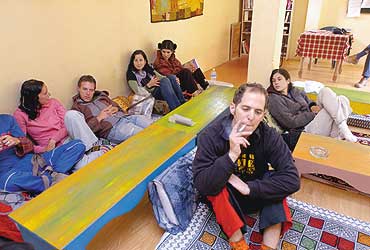 outlookindia.com
-0001-11-30T00:00:00+0553
'Do you want some Full Power?" Through the haze of smoke rising out of hashish-laden chillums, Uri, a young Israeli backpacker dressed in a bright shirt and pyjamas, looks up. A toke? Of course, he would like one. His friends, sprawled casually elsewhere around the room, are glued to a Hollywood film with Hebrew subtitles. They are already in the throes of 'Full Power' (a deep drag from a chillum) and 'Boom Shiva', the new-age mantras that are bringing peace and nirvana to the army of Israeli backpackers trooping into Kasol and Old Manali looking for some quiet and some hashish. Also heroin, ecstasy, coke, or lsd, should you feel the urge for harder drugs.

Outside, as the light of day fades into the dull hue of dusk, bright hoardings in Hebrew light up, offering a variety of Israeli eats. It's party time in Kasol, tucked away in the Himalayas, 25 km ahead of Kullu. It's a headache, however, for the local police. Also for the Israeli government which has had to send several delegations to India to find out why their young countrymen are going astray and how to rescue them. Says Omri Frish, member of one such delegation: "They (the drugs) are available everywhere. They grow under your guesthouse and come incredibly cheap." Frish was asked to set up a commune (see box) at Caesarea on the Mediterranean coast. Called Kfar Izum (Balance Village), it detoxifies and rehabilitates those who go abroad and return with drug-related problems. And most of those who have been through the commune have partied and over-indulged in India.

It's natural, given that accommodation, food, drugs and a good time come cheap in our country. The Israeli government estimates that of the 40,000 young Israelis who travel abroad every year, nearly 25,000 head towards India, wander the hills of Kullu-Manali in the summer and head towards the beaches of Goa in winter. In Kullu, district officials anxiously monitor the influx of Israeli tourists each summer. Their number has been growing steadily by nearly 60 per cent annually in the last three years.

They are also the largest group among foreign tourists who seek visa extensions and are aggressive about it. "They usually come in and ask for visa extensions as a matter of right," says a senior police official. "One group even offered to fight it out when I refused them!" Confirms A.K. Singh, superintendent of police, Kullu, "The Israelis, undoubtedly, form the largest group of foreign tourists coming here and are a fairly aggressive lot." 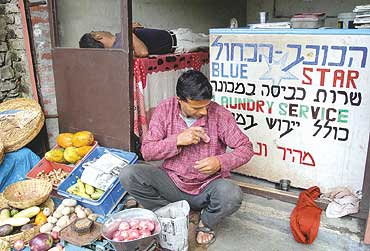 The problem, as Singh sees it, has been compounded by the fact that nearly 4,000 acres of the land in the district is under hashish cultivation. The situation has gone so out of hand that district administration officials, unable to cope with the problem on their own, have written to the state and central governments to intervene. "There are countries which demand that tourists have at least $5,000 on them before they are granted their visas. We have written to the state and central governments if we could have similar rules," a senior district official told Outlook.

Whether the state or central governments respond or not, the Israeli government itself has been most cooperative in helping the local police and administration. Two years ago, Haim Messing, director-general of the Israeli Authority Against Drugs, took up the matter with the Israeli ambassador in India and decided to set up a Bayit Cham (Israeli home) in Old Manali run by a middle-aged Israeli couple who would advise and counsel those coming to Kullu-Manali. Talking to Outlook, Messing said, "Many kids like to visit special places, and India, which is beautiful and very cheap, is a great favourite. In Goa, Kasol, Manali and Mcleodganj (Dharamsala), they find themselves in an environment where drugs are cheap and readily available. We felt an Israeli couple stationed here would be of great help".

So, Kochi and Yochai Am-Ad came to Old Manali a little over a year ago to take charge of the home. "We ensure that when the kids come and spend time with us, they don't do drugs. We also tell them to be polite to the locals and respect local customs," says Kochi. Towards that end, she sees to it that the Israeli backpackers who come into the region make use of her library which has books in Hebrew on India to sensitise them to local mores. "It's usually the first-timers who have just come out of the army and are keen to experience new cultures who need us the most," she adds. While most of Kochi's efforts are centred in and around Manali, Kasol and Chalal, she also spends time at Bhagsu village near Mcleodganj (Dharamsala) where Israeli backpackers go in search of spiritual solace.

This year, Jewish rabbis armed with the holy Torah too have set up camp in Old Manali and Kasol to bring the astray back into the fold. One rabbi has based himself in Kasol and functions out of a local restaurant that serves as a makeshift synagogue. While he goes about his task with great commitment, his flock is yet to grow, given that most Israeli backpackers still go for smokes rather than spirituality.

It's easy to spot the typical Israeli backpacker in the crowd. They are in the age group of 21 to 23. Most are here on an extended holiday after having completed their compulsory three-year stint in the army. They have heard of the Shangrila in India from their seniors who also travelled East and are merely following that tradition. Subjected to a regimented life in the barracks, the young men and women are waiting to cut loose and have a good time. A few come here for spiritual fulfilment but others go overboard in their pursuit of pleasure and end up as wrecks.

And their influence is beginning to tell on the placid environs of Manali. The brash, young Israeli backpackers have literally taken over villages like Kasol. Their overwhelming presence has made tourists from other parts of the world wary of including Manali in their itinerary. Says Hukam, who runs a small lodge in Kasol, "There was a time when we had tourists from Italy, England, Japan, Germany and sometimes America. Ever since the Israelis have come, many of the others avoid coming here." So much so that the word 'firangi' here is coming to mean exclusively Israeli. 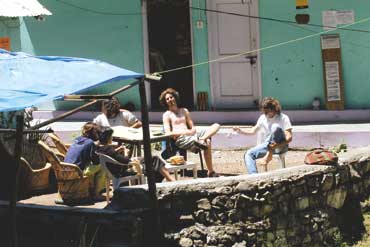 C.P. Sharma Regmi still calls his restaurant 'Little Italy'. But the food he serves in it is now Israeli. His pizzas have made way for the traditional pita bread and the tehina, labane, hatzilim and falafal, all borrowed from Israeli kitchens. "I actually learnt how to make Italian food, but once the Israelis came in, they wanted only 'home food', so my chef quickly learnt new recipes." So particular are the backpackers about home food that one sees Israelis troop in and out of Regmi's kitchen armed with ladles and a pressure-cooker. They obviously like to supervise the cooking.

No wonder, local eatery owners are beginning to feel insecure. They feel those among the tourists with culinary skills will soon set up shop and run them out of business. Says a restaurant owner: "Some of them have signed up with locals and set up their restaurants which means that we lose business. We know this is illegal but what can we do?" Once, Little Italy was the dominant restaurant in Kasol. Now, the 500-metre stretch on the Kasol-Manikaran road boasts of seven restaurants and several smaller eating joints and cafes.

Indeed, the economics of the region has undergone a sea change in the mid-'90s when the first Israeli backpackers took to riding up the hills on those Enfield 350 cc bikes. Old Manali quickly turned into a favourite haunt only to be replaced soon enough by Kasol, Chalal, Malana and Manikaran. Hotels and restaurants have come up everywhere. Villagers who till the other day grew crops on terrace farms quickly set up shops selling souvenirs.Others like Sumit Mukherjee, who ran an agency that organised treks out of Manali, moved to Kasol and built a hotel that stays packed throughout the season.

In short, everything in Kullu is now targeted at the Israeli tourist—the food, the clothes, the trance and the techno music. A shack adjacent to Hukam's hotel promises Boom Shiva (read hash) and good music. Peep in and a blast—repetitive and cyclic—hits you. Breathe, and you can inhale Shiva all around. All across Kasol there are posters advertising the "trance for nations" in Dharamsala beginning June 16. Organised by a group of Indians and Israelis, it's said to be "the biggest party in years to come". And all of Kasol has headed for the party.

Resort-owner Hukam has seen the several changes tourists have brought over the years. With a note of regret, he says, "The European tourist would come dressed in salwar-kameez and try to respect local customs. But the Israelis come and live as they please. As a result, you will see many among the youth here trying to ape them. I am not sure whether this is good for us in the long run."

But good or bad, the Israelis look like they are here to stay. By force, if necessary. The locals find them more demanding than the Europeans and Americans. "They will bargain for everything and usually get their price, they demand their food as a matter of right and even be ready to fight for what they want," says a restaurant owner.

Yes, life isn't the same anymore for the people of the Kullu Valley. The villages have been jolted out of their idyllic slumber, witness as they are now to full moon rave parties. There is a hustle and bustle all summer and rave parties every full moon. The 25,000-strong Israeli backpackers mean good business. But the elation comes tinged with apprehension. The party may not last too long, with drugs becoming so rampant and the Israeli government getting worked up about it. If the police are forced to crack down severely on the trade, a heathen paradise would then be lost.

A CBM For The Lord