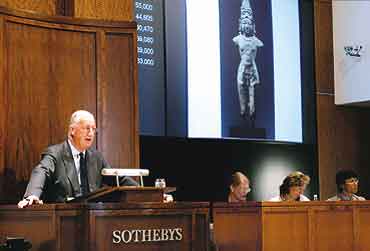 With the good run showing no signs of slowing down, could there be a better time to launch an 'art fund'? All of this August, investment bank Edelweiss Capital was raising money from its clients for Yatra, an art investment fund centred around the booming contemporary Indian art market. The brainchild of Geetha Mehra and V. Sanjay Kumar, co-owners of Mumbai-based Sakshi Art Gallery, and Pravin Gandhi, venture capitalist and IT entrepreneur, Yatra will work much like a mutual fund. 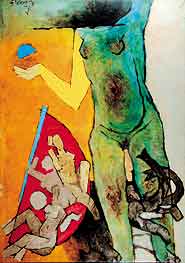 With the minimum set at Rs 20 lakh per investor, the Yatra fund is being marketed to the bank's "high net worth" clientele with a risk/return profile slightly lower than equities, but significantly higher than debt. The fund closed on August 31, and now armed with a corpus of Rs 12-15 crore, it will identify and acquire Indian contemporary and modern paintings—primarily by established artists but also upcoming painters with an established price history. The carrot being dangled—at the end of a four-year lock-in period it is expected to give returns of between 10-15 per cent per annum.

"Prices will go higher as established artists get older and availability (of their work) becomes limited," says Gandhi, echoing the hopes of his co-trustees. "That's why we are here." He's right. "Souza passed away (in 2002) and that really put a spur to his market," says Mort Chatterjee, a Mumbai-based art dealer with an art consultancy. "Some auction houses were even reducing the number of Souzas they had on sale... until he died." In March '04, at a Sotheby's sale in New York, Souza's Mystic Repast was the artist's first work to cross the one-lakh dollars mark, fetching $1,53,600. This price was beaten by the sale of his Red Moon for $1,83,000 on Saffronart nine months later.

That's not the only reason for skyrocketing prices though. Up to a few years ago, the modern Indian auction market was driven primarily by wealthy nris. For them, "art is a cultural or nostalgic bridge with their heritage while also supporting a serious collectors' arena," says Minal Vazirani, co-founder of Saffronart, the largest online auction house for modern and contemporary Indian art. The situation is different today, with the collector base evenly divided between Indians here and abroad. And a minuscule 10-15 per cent of outside interest.

Looking at the Indian art market in snapshots, it's also easy to mistake rising prices as a recent phenomenon. In fact, prices have been rising steadily over the last 50 years, says Vazirani. What's changed over the last decade or so is the rate of increase. "The more rapid escalation has coincided with the entry of international auction houses in India," she says.

Possibly the first sign of strong interest was the Herwitz sale of contemporary and modern Indian art in New York, in June '95. "This was the first time you saw a really great collection of Indian art up for grabs in the international market," says Mort Chatterjee.Prior to this, international access to Indian art was limited. Save for a few artists like Raza, who moved out of India and developed his own collector base abroad, Indian art could only be purchased in India, from galleries or directly from the artist."It took us four years to persuade Christie's to come here," confides Arun Vadehra, owner of Delhi-based Vadehra Art Gallery, and consultant to Christie's since 1995. "Getting international exposure was the only way to expand the market."

In the early years, pre-sale estimates were deliberately kept low and prices of Indian art remained nominal. The turning point came in December 2000, when prices far exceeded the estimate range at a New York Sotheby's sale. Among others, a Tyeb Mehta acrylic-on-canvas sold for $72,000, beating the $15,000-20,000 estimate. Raza's Rajasthan, similarly evaluated, sold for $53,650.

Since 2002, every auction involving Indian art has been a landmark one, with total sales far outstripping the pre-sale low estimates. Projections for this year are confident: Sotheby's expects to field 163 lots with a total low estimate of $3.8 million. However, Vadehra estimates sales for Christie's to go as high as $10 million this year. He's quick to add, though, that this is small change for an auction house with an annual turnover of about $3 billion.

"One of the reasons prices have gone up with the auction mechanism is because of greater transparency," says Vazirani. "People are more confident of paying premium prices because they know that this is the market price based on buyers' bidding." With prices often beyond the pale of individual purchases, there is strong impetus for an art fund to pool capital. What makes art investment-worthy is also its "tremendous symbolic value, like gold and jewellery," observes art critic Ranjit Hoskote. "Great art is insulated from real-world fluctuations."

The Yatra fund is the first of its kind in India, but at least one more is on the anvil. Neville Tuli, founder of Osian, India's first auction house, too is set to launch a Rs 100-crore art fund in October. While Tuli claims "100 crore can be spent in a week" if you know where the art lies, Yatra's investment guidelines have settled on a more conservative average: Rs 20 lakh per painting.

The battlelines are already drawn. In an obvious jab at Yatra, Tuli says: "You won't get one quarter of a Gaitonde for Rs 20 lakh." There is some truth in this. With tight supply conditions and sky-high prices, a small corpus fund could limit Yatra's ability to acquire quality works that are guaranteed to appreciate—or to diversify risk. Plus, as Tuli points out, investors might not be inclined to lock their funds for four years, with no periodic returns. 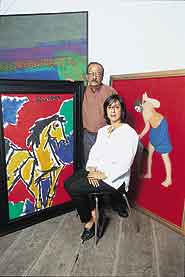 Yatra's Gandhi is quick to respond. "What's the point of raising Rs 100 crore when you can't use it? It's a tight market, and it will be tough to deploy so much money, even over a year. By averaging my cost, I can buy about 70 paintings. With works that cost a crore each, we'll need to find buyers with more than a crore to spend. People aren't just going to write cheques." Of course, Tuli thinks otherwise.

In spite of differences in how the funds will operate, some challenges remain common to both. Recognising good art is never going to be easy, particularly when pricing is far from an exact science. In the short run, the artist's marketability, even media hype, can push up his price. Sourcing good art at fair value is as difficult, and it rests upon the fund operator's resourcefulness and contacts in the art community. Also, if art funds are compelled to buy art at inflated prices, or to offload it quickly when prices drop, they could have a misleading impact on the market.

The cost of selling to the Indian diaspora is also high, because artworks need to be taken on road shows abroad. Transaction costs (sales tax, gallery commissions and import duty) remain as high as 15-20 per cent, says Nilesh Shah, executive director of Edelweiss Securities, when compared to a brokerage of just 0.5 per cent for shares.This makes it difficult for a fund to buy and sell artworks at will. Moreover, Yatra will not be regulated by SEBI; The Indian Contracts Act does not include artworks in the category of securities. "It's very important that an art fund follow the same rules of due diligence as any other financial product," says Tuli. But will this happen in the absence of any formal authority to monitor compliance? 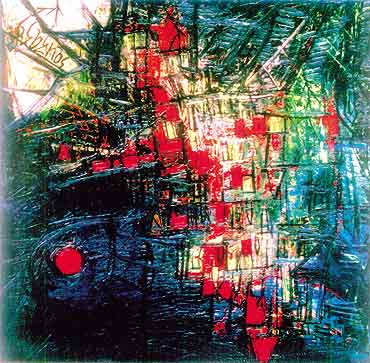 Another challenge for art funds is the prevalence of black-money transactions in the Indian art market today. Osian's 'no cash' policy has turned away many buyers, says Tuli. "Without exaggeration, we lose a minimum Rs 10 lakh per day of sales because of the not-accepting-cash policy." Gandhi is more optimistic: "These are early days for paintings as an asset class. But the RBI, SEBI and other enforcement agencies will be forced to step in and streamline this sector once they take notice of it."

For now, though, this is still a sunrise industry. "Indian art needs to be branded abroad, like European art, so that you can walk into a museum anywhere in the world and access books on Indian art, if not the works themselves," says Vadehra. "We have nearly 2,000 students coming out with Fine Arts degrees every year, but no more than 40 notable artists. An artist, even now, is looked down upon as an eccentricity."

An educated art community is crucial for building both a critical and a price consensus on an artwork. "We need more publications, from specialist literature to entry-level books," says Hoskote. "Critical expertise is missing and art has been reduced to a lifestyle. We need people to take curatorial practice seriously. We need stronger connections between galleries and the wider audience, conservation specialists for a market built upon material objects that need to be cared for."

The Indian art market is far from mature, but its current buoyancy isn't just a flash in the pan. "Purchasing at the top end is still primarily by collectors, rather than short-term traders—which gives this market its strong fundamentals," says Vazirani. As more money comes in, the market should shape up. And, according to market buzz, there are at least five more art funds in the pipeline.

For now, all eyes are on Yatra. The only tangible assurance of its performance is the hurdle rate of 10 per cent per annum. This means that Yatra's promoters will keep their own returns on hold till they have made at least 10 per cent returns for investors. Thereafter, returns will be shared in the ratio of 70 per cent to the investor and 30 per cent to the fund managers. "Essentially, we are putting our money where our mouths are," says Gandhi. "Once we can prove that this works, nothing stops us from creating a new vehicle for art investment." Art for art's sake, money for man's sake?