A move's on to give old cars a decent burial 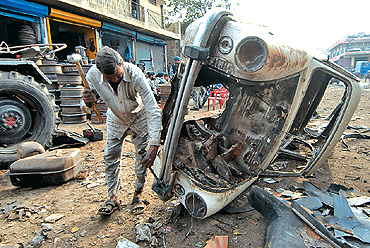 outlookindia.com
-0001-11-30T00:00:00+0553
Where do old cars go and die? Now that the Nano is around the corner, that is a question worrying the government and the auto industry. As India’s car ownership soars, there is a growing realisation about the impending problem of scrapping vehicles that will go off the roads in the coming years. While unfit automobiles (either outdated or accident cases) are currently dismantled and recycled by the unorganised sector, experts feel the handling of scrap in huge volumes demands suitable infrastructure and technology.

The office of the Principal Scientific Advisor (PSA) to the government says this issue will now be taken up at the next meeting of the scientific advisory committee to the Cabinet. The objective: explore how science and technology can help scrap and recycle the growing number of unfit vehicles. "It is going to be a priority issue for India," says S.K. Sikka, scientific secretary at the PSA’s office. "The idea is to ensure vehicles are dismantled in an environmentally and socially responsible manner, and at the same time maximise the recovery rate from old automobiles."

The number of vehicles to be scrapped over the next decade is expected to rise around 10 per cent per annum. An ICRA report for auto industry body Society of Indian Automobile Manufacturers (SIAM) estimates that in 2007, a total of 1,80,933 cars were scrapped. This is expected to rise to 4,54,310 by 2015. For two-wheelers, the number is a staggering 1.6 million and 3.3 million, respectively.

The argument offered for change is that such large numbers cannot be handled efficiently by the present scrapping business that operates more like a "cottage industry". It is mainly centred in cities such as New Delhi (Mayapuri), Chennai (Chintadripet) and Calcutta (Khidirpur) and is run by individual scrap dealers. Much of the process is crude and is carried out manually with gas cutters and hammers. Recovery rate of materials is therefore very poor (around 20 per cent). Certain countries in Europe, on the other hand, re-use as much as 85 per cent of their old vehicles. "These people are doing a great service, but in their present form are just not equipped for the future," says N.S. Mohanram, who heads SIAM’s panel on automotive recycling.

The environmental damage caused by slipshod scrapping is another major concern. More often than not, abandoned oil, paint and grease seep into the ground. Moreover, vehicles contain poisonous substances such as mercury and hexavalent chromium that are used in paints. They even have toxic chemicals that are meant to spark a reaction on collision to fill an air bag with gas. Such substances, experts argue, need precision handling.

To begin with, there are plans to set up a demonstration unit with support from the National Automotive Testing and r&d Infrastructure Project (NATRIP) to illustrate the actual process and convince those in the business now to adopt newer practices. "Before that, we need a uniform national policy decision to identify a vehicle that needs to be scrapped and to give incentives to owners so that they do not abandon them," says G.K. Sharma, technical director, NATRIP. Currently, only select cities, such as Mumbai, Delhi and Kanpur, have norms to identify end-of-life vehicles.

While adopting technologies from abroad is an option, the focus will be on devising a labour-intensive system which is also suited for two-wheelers. A seminar on automotive recycling organised last year by the Indian National Academy of Engineering and the PSA’s office recommended that vehicle manufacturers improve recyclability and provide detailed dismantling information. It urged the government to put in place regulations on hazardous materials used in automobiles and to create collection centres near cities for end-of-life vehicles. Laboratories have also been asked to research on improving recovery of useful materials to minimise pressure on landfills. "There is nothing more inherently recyclable than a car," says Mohanram. "Moreover, organised recycling is economically viable, socially beneficial and environmentally benign with great employment potential." That’s sweet music for those with visions of the urban landscape being littered with abandoned vehicles.

Out Here The Nano Is A No-No