Is there a Miss Grundy in you? Online tutoring is the new twist to BPO. Wake up at 5 am and teach a kid in Montana. 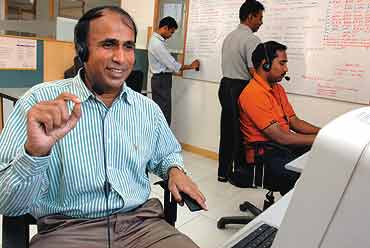 outlookindia.com
-0001-11-30T00:00:00+0553
Eashwer—that’s a pat name for an online guru. He’s with TutorVista.com, an e-learning firm in Bangalore. His day begins at 5 am, just as his students in the US are getting ready to do their homework. Today, at exactly 5.59 am, he logged on to his computer for his session with Geetha Sukumaran (name changed), an 11th grader in Memphis, Tennessee. The computer is equipped with special software that enables audio-visual interaction between the two.

As Geetha logs on, Eashwer—or, if you want the name his American students know him by, say Gary Rogers—says in emollient tones that are obligatory for an outsourced service provider: "I’m sure everything is going fine for you, Geetha." And she, in typical American teenybopper drawl, shoots back: "Why’s that?"

Eashwer has been trained to deal with such cultural anomalies and he smoothly veers the dialogue to the mathematics topic of the day—rational expressions. Commendably, he manages to keep his cool and sound encouraging despite his student’s shaky knowledge of the subject. He has picked up a bit of slang too. He warns Geetha about "cranky" examiners "who like to see the rational expression always expanded." Though he does not roll his Rs, there is no residual Kannada accent either. "I had a tough time mastering the accent," admits Eashwer.

As Geetha starts writing an equation in a scrawly hand, Eashwer is quick to provide the mandatory encouraging background noise... "correct, good". Even when he sees that she has got her answer wrong, he quips gaily, "I have a tendency to say correct even before you have completed the equation!"

In the fast-growing, competitive world of cross-continental virtual classrooms, there’s no scope for a teacher to reprimand a student. Every student means business and must be encouraged, come what may. According to market estimates, online tutoring companies in India earned around $10 million last year and 80 per cent of the earnings were from the US.

At present, there are four main Indian e-tuition providers: Educomp (Delhi), TutorVista (Bangalore), Growing Stars (Kerala) and Career Launcher (Delhi). After business process outsourcing, knowledge process outsourcing or KPO, which includes the e-learning industry, is set to emerge as the next big success story. The CII estimates the KPO business will register 46 per cent annual growth and India will become a KPO hub worth $17 billion by 2010.

The KPO industry received a big boost after US President George Bush brought into force the NCLB (No Child Left Behind) Act in 2001 that aims to improve the grades of students in American schools by 2014—if they fail to do so, their state funding would be reduced. According to an American survey, 40 per cent of seventh graders in the US fail in maths and English language exams. This has resulted in a huge demand for what Americans call supplementary education services, like online tuitions.

Since Indian tutors charge less ($20-$30 per hour) than Americans ($60-$100 per hour) and because Indians are known for their proficiency in maths and science, business is booming for the handful of e-tutoring firms in India.

Educomp Datamatics Ltd, a Delhi-based education company, launched e-learning portal www.mentoraide.com in 2003. It is now a Rs 32-crore company with an annual growth rate of 60 per cent. K. Ganesh, chairman, TutorVista, is more than optimistic about the growth potential of his company. He wants to expand his current strength of 30 teachers to 100 by the end of the year. "This can be easily achieved by tapping the potential of hundreds of qualified professionals who are unable to take up a full-time job due to family pressures," says Ganesh, who is targeting cities like Jamshedpur and Rourkela that have a large number of qualified teachers. Career Launcher, earlier just a coaching centre, now hopes to earn 40 per cent of its revenue from e-learning operations. 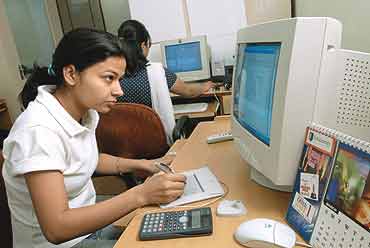 For trained teachers who have time on their hands or who cannot work full-time because of family responsibilities, being an e-tutor provides an excellent opportunity to earn decent money and stay in touch with their skills. All they need is the prescribed software, a good broadband connection and hardware tools like a whiteboard (digital notebook), a digital pencil and headphones. On an average, an e-tutor can earn $15-30 (Rs 645-1,200) per hour. Student coordinators or counsellors at these firms, who juggle complicated student-teacher timetables and offer specialised educational advice, can earn up to Rs 30,000 per month.

Smaller towns and cities, too, are waking up to this business opportunity. Take for instance, Top Careers and You (TCY), a career academy in Ludhiana. Realising there was a growing demand for e-teachers from India, Kamal Wadhera, the owner of TCY, started Stepsedu.com, an e-learning firm, in 2002. On its staff are 15 to 20 MSc and engineering graduates who were unable to get decent jobs. They now coach about 250 school students in Texas, California and Montana. Though the firm has an annual turnover of just Rs 1.5 crore, Kamal is confident that he’s on to something big. "The gap between demand and supply is so huge that even if six more such outfits come up in Ludhiana alone, it won’t make a dent in my business," says Kamal.

Swati Chopra, an e-teacher with Career Launcher, gets some 20 resumes from work-seekers everyday. "They are from all over the country," says Swati. Career Launcher has e-teachers from small towns like Rishikesh on its rolls. "For them (teachers from smaller towns), this is a good way to supplement their earnings," says Anirudh Phadke, principal consultant, e-learning, at Career Launcher. The main problem these teachers face is getting the accent right. At all the e-learning units where teaching is voice-enabled, teachers are given training in accent modulation. E-tuition firms generally look for teachers with good communication skills and five years’ teaching experience.

Among subjects, maths generates the maximum business, followed by science. But some students want to acquire skills that are a bit more esoteric—one student signed up with TutorVista for weekend lessons in Carnatic music. "Since 40 per cent of our clients are people of Indian origin living in the US, we sometimes entertain requests like these," says Ganesh.

Some students want more than just lessons. Gaurav Bhatnagar, a vice-president at Educomp, recalls a student of Indian origin always liking to chat about the latest Bollywood movies before starting the day’s lessons. "Like in a traditional classroom, in a virtual classroom too emotional bonds develop between the student and the teacher, which encourages informal interaction," says Gaurav. There is digital bunking too—by students who don’t come online for days together. But there is no digital cane to punish the offenders.

By Shobita Dhar with Chander Suta Dogra in Ludhiana