Whatever Dus lacks in logic, it overcompensates with style. 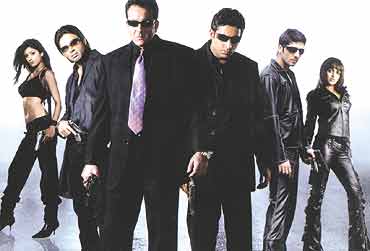 Dus comes with a statutory warning: watch it only after a total suspension of disbelief. There's no sense of time and space and nothing remotely logical about the plot, setting or the characterisation. So you have the AIIMS flyover situated next to a huge lake or sea which no Delhiite would have ever spotted! The house of the Indian home minister seems more like a Gurgaon penthouse than an Akbar Road bungalow. And the characters fly from Calgary to Delhi faster than you could travel to Rohini from CP in the Metro.

But whatever Dus lacks in logic, it overcompensates with style. Take the title song itself, the groovy Dus Bahane with the preening Abhishek and the cool and naughty Zayed. Then there are innumerable sexy cars and mobikes, ubercool glares and sharp black suits. Smart one-liners and cheeky humour add to the sharpness of the visuals. And the Abhishek-Sanjay and Abhishek-Zayed banter makes things even more happening. The cherry on the cake is Ms Shetty doing an Angelina "Lara Croft" Jolie. And she definitely has the figure and moves to match. Diffusing a bomb and fighting terrorists couldn't have ever been so glamorous in the entire history of Bollywood.

Siddhant (Sanjay) is the head of an anti-terrorist cell whose other members are Aditi (Shilpa), Shashank (Abhishek) and Aditya (Zayed). Within 10 days they have to get even with a terrorist called Jamwal who is planning a major attack in Canada. Helping them in the task is a Canadian police officer, Dan (Suniel Shetty), and a comic sidekick of Jamwal, Himmat Mehndi (Pankaj Kapoor), who is much more diabolical than he seems. What you have is a Bollywood action movie that wants to beat Hollywood at its own game. Alright, it may still be way too down on the slickness quotient but I enjoyed it much more than any asinine Van Damme flick. The climax is clumsy, Raima Sen as Dan's screaming wife sucks and so does Esha Deol. But Abhishek and Zayed carry it through with their light, fresh and unselfconscious acts. The standout show is from Pankaj who does an extended comic performance with the right dash of unpredictability and menace. A word of advice: screen Dus for George Bush. Watching Gulshan Grover play the blue-eyed Osama lookalike will gladden his heart.