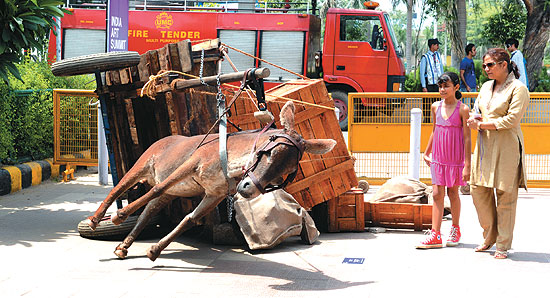 The tinge of green, however pale, was unmistakable: and, as mandated by tradition, it spelled envy. The socialite habitue—and occasional patroness—of the arts scene in Mumbai let out a long sigh on opening night in the cavernous hall of Pragati Maidan. “We are losing it in Bombay. Delhi is so, so happening...” her voice trailed off as she took in the palpable buzz at the India Art Summit, for which scores of Indian and seventeen international galleries had set up shop.

It was a lament I was to hear repeatedly from several gallerists and the arterati of Mumbai, many of whom had reluctantly come down last week for the second edition of this art mela. (Yes, mela. There was a seminar-fest, too, but that was really for the brahmins of the art world: attendance was prohibitively expensive, and all the action and raison d’etre of this three-and-a-half day happening was elsewhere—in the market.)

The initial reluctance on the part of Mumbaikars to participate, or to even play the humble role of flaneur, at this mela has to do with the rather dismal first edition of the art fair last year. As a Mumbai gallerist who tots up humongous frequent flier miles doing the international art circuit put it, there was “something third worldish about the first time”.

Moreover, for the last couple of years, a few gallerists in the city by the sea have been talking rather smugly about how cutting edge their resident artists are—as well as their newly designed spaces. Something along the lines of: Delhi has Subodh Gupta, admitted, but we have Jitesh Kallat, Atul and Anju Dodiya, Chintan Upadhyay, T.V. Santosh, Shilpa Gupta...and so the litany of the poster boys and gals of contemporary Indian art on the global art circuit goes on and on. I could also go on and on with an unending mantra of saddi Dilli’s hotshot artists springing up in unexpected places and getting onto the fast, globe-trotting track. But that is not the purpose of this piece.

Last year, international galleries were conspicuous by their absence at an art fair that was meant to be international. Admittedly, there was also “something shoddy” about the hastily put up stalls, with some exhibits not amounting to much more than bric-a-brac. It was more like a jumble sale, the reason several of the premier art galleries of Mumbai like Sakshi Gallery and Chemould-Prescott had to be wooed and persuaded to take part this year by the festival organisers. (And, to no less an extent, by the Delhi art fraternity.) Obviously, they did not regret coming: most of them returned to Mumbai smiling, with fewer works to haul back.

It was a different ballgame this time. Exponentially so, if you took in the unexpected, more-than-respectable sales figures, said to be in the region of Rs 26 crore. But it wasn’t only about volumes. ‘Exposure’ was the word that kept popping up in assessments of the art fair. Not only was the turnout remarkable; but, big-ticket international museumwalas, curators and art impresarios, not to speak of a former director of the Basel Art Fair, were obviously not bored with what was being exhibited. On the contrary, many of them were impressed by the “energy” of the place—energy is the new word for buzz.

It wasn’t just the usual suspects of the Indian contemporary art world on show. Artists flying below the radar were now suddenly, pardon the expression, exposed. The kosher amongst the international art frat took detours to see the works of artists who were not on the must-have, must globe-trot lists of prominent galleries: a few wandered off for studio visits. Even the rather jaded Delhi art aficionados were taken aback by a whole crop of young and relatively unknown artists.

There was something of a real democratic churn going on this time, thanks undoubtedly to the man silently at the centre of all this. Sunil Gautam, the managing director of the India Art Summit—he owns a PR company—delegated well to an able team. Hope our bureaucrats running cultural organisations are taking notes.

The buzz about the fair may have been heightened by the presence of Aneesh Kapoor’s breathtakingly beautiful work and the many little Picassos on sale. But it was the vibrant ambience of the fair that was captivating—especially to the young. A twentysomething visitor put it aptly: “I felt like a tourist. It was like watching a polo match. Your eyes moved from the artworks to the people to the artworks again.”

(The author is a columnist who writes on art.)