What I would really like to understand is how a city that is roughly 60 per cent Indian (and 80 per cent South Asian) gets to be called an "Arab Emirate". 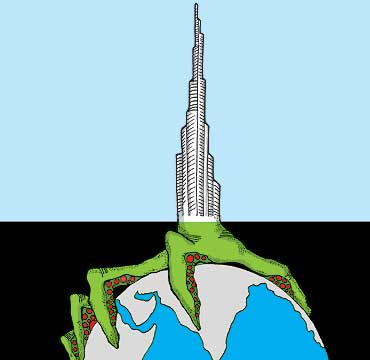 outlookindia.com
-0001-11-30T00:00:00+0553
Decades on, there is every possibility that Dubai will become a collection of cult objects. As things stand, it is merely the first capital of the Third World. And this is reason enough for us to consider the city beyond the terms of the tourist brochure.

Consider, for instance, Dutch architect Rem Koolhaas' vision of the "generic city". Like many of his ideas, this too is somewhat obtuse. By his account, the city of our present is finished. The generic city, our collective future, is nothing and everything, a contractible contraption exclusively populated by nomads and exiles and aeroplanes, where culture is history, even history is history, and which, "like a Hollywood studio lot", he explains, "can produce a new identity every Monday morning."

I'm familiar with the generic city; in fact I think I live in it. Or at least I would if I was to believe everything I read about Bangalore in the press. But like so many grand plans applied to grand cities, the details find a way to do their own confounding thing. Aside from Bangalore, only a handful of other cities today can claim the privilege of being researched with such hysterical intent, or reduced so frequently to some smug little homily of globalisation, and that is why I have sympathy for the idea of Dubai.

This is difficult to admit, since my own experience of the city has been awful. I travel occasionally to Johannesburg, and Emirates airlines is the easiest way to get around the Third World. Inadvertently thus, I am on intimate terms with Dubai airport and its environs. I have waded through its bathrooms (flooded by subcontinentals who have charmingly discovered that the bidet spray can double up as a shower), been offloaded and offhandedly dismissed by its racist airport staff and spent several zombie hours sliding off polyester sheets in biliously carpeted hotel rooms.

Then there is Dubai's rah-rah club. The cheerleaders themselves are a simple lot, content to shuffle about their beloved Tuscan fortresses in hermetically sealed compounds from Gurgaon and Powai to Whitefield and, of course, Dubai, where the art of the Tuscan fortress has reached its apotheosis. It is their scribes who are sinister. The average lazy interpretation of Dubai is tagged with the sort of keywords that excite these people tremendously: "modernising Arabs", "glocalisation" and so on. The ensuing scholarship will take decades to undo, and however ignoble yet, is nothing compared to the lurking danger that Tom Friedman will decide to write a book about Dubai.

Having said this, I will confess a respect for indigenous Dubai design. If I had to choose between that and the global epidemic that goes by the name of minimalism, I'll take the electric palm tree any day.

What I would really like to understand is how a city that is roughly 60 per cent Indian (and 80 per cent South Asian) gets to be called an "Arab Emirate". Oh wait, this would be because the majority of that majority population have sub-human status in Dubai even after spending entire lifetimes there. The city is an artifice alright, but more for its caged, shackled and imported underclass than its ersatz snow. If the situation sounds familiar, it is with good reason: these are the demographics of colonialism. The eerie thing about Dubai's imported colony is that it comes complete with a white overseer class, also imported of course.

For the most part, it would seem like the Indian state is happy to count its remittances and not mind. To be fair, the entire West Asia has long served as a steady stopgap for residents of failed states not just in India but also Asia, Africa and beyond. And it isn't like Indian construction workers get treated any better in India; in fact, the only time our press seems to notice them these days is when they're protesting mistreatment at foreign hands.

There is a way out of this mess. The tricks of the trade may be best gleaned from Europe, whose cities have had to renovate and reinvent through much of the 20th century, though with native emirati counting for less than 20 per cent of the UAE, something more imaginative is probably necessary.

Even as we speak, Rem Koolhaas is designing his grandest ever project—the 1.5 billion square foot Waterfront City on an artificial island extension of Dubai. With the generic city willed into existence, can the caring cosmopolis be far behind?

(Achal Prabhala is a writer and researcher in Bangalore)