The British PM hedges, but on the streets he's losing the battle 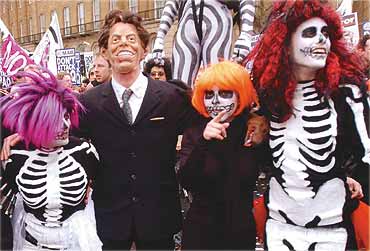 outlookindia.com
-0001-11-30T00:00:00+0553
A US opinion poll made the point about the millions who marched against war in London. The majority surveyed backed Bush in the war on Iraq, but that fell to no more than 35 per cent support when asked if the US should attack without Britain on its side. Tony Blair, if anyone, can put the brakes on the march to war George Bush is on. And it is people power that could put the brakes on Blair.

There was no way Blair could ignore the biggest demonstration London has ever seen. So when a schoolgirl yelled outside 10 Downing Street, "Drop Blair, not Bombs", there was a serious enough question here about Blair's future as there was about Saddam's. "I don't seek unpopularity as a badge of honour," Blair said in Glasgow in a speech rescheduled to avoid demonstrators. He said he accepted unpopularity as the "price of leadership, the cost of conviction".

Not something any leader accepts with ease. Blair looked a leader of his country, not of his people, unlike Gerhard Schroeder and Jacques Chirac who are talking the language of the people.

And he hasn't lost his case yet. Blair cites public opinion polls to show that "more than three quarters say they would support war if it has UN support". Little surprise that Blair is now pushing for a second UN resolution—one the US does not particularly want. In the Security Council that resolution will encounter a potential veto from France and at least a very critical look by China and Russia. Brakes can lead on to brakes. The mass of demonstrations is no doubt at least slowing the march to war, if not stopping it.

Blair is betting the war will be safe enough. "If I thought we were going to unleash something in which hundreds of thousands of people were going to die, we were going to have more bin Ladens, the West Asia was going to go up in flames, no, of course I don't believe that that is the case," he says. Blair is gambling on a long series of bets: that the bombing will be really 'smart' despite the thousands of civilians who died last time in Iraq, or more than a thousand who died in nato bombing in Serbia four years ago; that the Iraqi people are waiting to hug every American or British soldier who comes along; that there will be a new government and new money which everyone will like. Take away any of this and throw in a hundred British casualties, and Blair could have gambled and lost.

Britain is in civil (and for now mostly civil) war. The demonstrations have been peaceful, almost pleasant. But can Blair take the people with him, or will the people be able to pull him back? It will decide Britain's involvement, and America's war.

Draw! Dirty Dubya And The Thief Of Baghdad