Effective haggling is about giving an inch to take back a yard. Don't feel squeamish about penny-pinching. 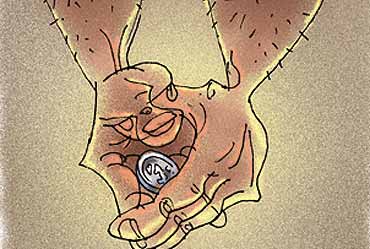 outlookindia.com
-0001-11-30T00:00:00+0553
Down the ages, sailors on shore leave have acquired a certain notoriety for highly indecorous conduct, and Yemen-based ‘shippie’ Harsh Damodaran is happy to have done his bit to keep that maritime tradition alive. While on shore leave last year, Damodaran went shopping for high-end electronic goods for his parents’ new apartment in Vashi (Navi Mumbai), with the stated intention of getting "the best damned discounts I could extract". And the methods he employed were diligently planned with military precision. He first carried out a reconnaissance mission to survey the terrain and identified the "enemy’s" weakness—dealers who seemed the most desperate to sell in a recessionary market, and therefore the most amenable to engage in a price war. He then played each against the other by ruthlessly deploying his most powerful weapon of war: "my ability to drop anchor and haggle all day—and all night." By the time a weary dealer, his ears still ringing with Damodaran’s staccato bursts, signed a ceasefire agreement, the Rs 3 lakh-plus bill had been whittled down by about a sixth.

"It was the nearest thing to a bloodless coup," recalls Damodaran. "And although there were times when the dealer tried everything within his power to make me feel a bit of a heartless, money-grubbing cheapskate, I wasn’t put off. If there’s one thing that a life at sea prepares you for, it’s to play the waiting game to perfection. And the golden rule of haggling: patience pays."

Bargaining, that transactional tug-of-war you engage in with a seller to get him to sell you what you want at the price you want it for, is in some ways your best bet to land a value-for-money proposition when you go shopping. It is also your most effective weapon to neutralise wholly unjustifiable price mark-ups on commoditised products by some dealers. And it’s a monetarily rewarding way of exercising your commercial clout and making the market dynamics of demand and supply work to your price advantage.

"Far too often, it’s squeamishness, an aversion to being seen to be penny-pinching that inhibits people from asking for a percentage off, but that’s a misplaced emotion," says infotech entrepreneur Ajay Srivastava, a frequent business traveller who’s made a habit of playing hardball with hardware vendors, as well as at hotel check-in counters and airline ticketing terminals. "The meek may inherit the earth, but they certainly won’t savour the best deals: frugality and brazenness go absolutely hand in hand."

Part-mindsport, part-vaudeville, haggling is a game that two can play. Artful salespersons are themselves known to resort to a barrel-load of tricks and marketing sleights of hand in order to hustle you into buying. So, holding out for less and beating prices down is oftentimes merely a matter of protecting your commercial interests.

How well you bargain might, net-net, critically determine the price you pay for that home theatre system or for that new palmtop—or even that hotel room tariff or that air ticket. And although there are instances when a bit of theatrical grandstanding and melodramatic brinkmanship is thrown in for good effect, the business of haggling needn’t always be conducted in rancorous, unseemly fashion. You’re a good haggler if you get the deal that you want and yet leave the seller believing he has won the commercial transaction.

Like all good things, bargaining is most rewarding when it’s done to moderation, with a readiness to give as well as take. It doesn’t really pay to have the charmless ferocity of a pitbull terrier when you’re out shopping; an unaccommodating customer can compel a dealer to get his back up and slam the door on any further negotiations. "Understand that the other guy is also keen to protect his interest—just as you are yours," says Damodaran. "Play by the golden rules of haggling, and you’ll land some amazing deals—and enjoy a feisty shopping experience."

Study the turf
When you’re planning a big-ticket expenditure, it makes good sense to do a preliminary round of window-shopping, compare prices and product specifications and get an idea of precisely what you want and what might constitute a fair price for it. Even when it comes to branded white goods, say, you’d be surprised at the price differentials among different dealers in the same city. When you are ready to get into the trenches and down to some bare-knuckles bargaining, this information will be your most useful asset.

For instance, before his business tours, Srivastava does a spot of research on the Internet to compare hotel room tariffs and early-bird discounts. "There is no such thing as a ‘rack rate’ at hotels," he says. "Even if you walk into a hotel without prior reservations, negotiate at the counter, or call for the senior manager who is authorised to offer discounts. That way, you can get anything between 15 and 50 per cent off—that’s how much the hotel would otherwise have to pay as commission to an agent. This works best at the many inns and motels around airports, railway stations and bus terminuses."

Understand market dynamics
The key to successful shopfloor bargaining lies in understanding the built-in mark-up in prices and the reality that there is room for negotiation in virtually every purchase, and then leveraging your clout as an informed consumer to milk the discounts. Dealers realise that in a marketplace that runs on Darwinian principles, there are others competing for your custom—and your money. Your best chance to land a good deal is to prey on their apprehensions and prise open the door to negotiations.

Srivastava says air travellers make the most of the price wars in the industry on metro routes like Mumbai-Delhi and Mumbai-Bangalore, which starkly manifests itself at ticket counters outside departure terminals a few hours before a flight. "I’ve often made the duty managers of Jet Air and Sahara compete for on-the-spot cash discounts and ‘freebie gifts’ offered for the late night Mumbai-Delhi flight," says he.

Identify the seller’s soft spot
Make time an ally. You may be in no hurry to buy a product and your priority may be to get the best price for a product; but the seller may be rather more keen to clinch a quick deal because he has sales targets to meet. Additionally, a product that has been languishing in a showroom for a while is sure to be locking up the dealer’s money. Your bargaining position is greatly strengthened in such cases—provided you don’t allow yourself to be hustled into buying. Slow down the process, and hold out for additional discounts.

Play it right
Effective haggling involves a bit of role play, a spot of theatrics. It will demand the masterly strategising skills of a chess grandmaster as you make ridiculously low opening gambits, the cool nerves of a poker player as you resort to brazen brinkmanship, the instincts of a prize-fighter as you duck and dodge your opponent’s sales spiel and the ability to call his bluff when he makes take-it-or-leave-it offers. On occasions, it’s also a bit like being locked in an eyeball-to-eyeball confrontation to see who’ll blink first. When you’ve reached a deadlock on prices, don’t make that first move to bridge the difference. Always wait for the other guy to do that; that way, if you split the difference yet again, it’ll work out to your advantage.

Lure him to your lair
Most customers are wary of bargaining hard on the shopfloor for fear of drawing what they perceive as unflattering attention to themselves; it is this sense of discomfiture that dealers often seek to exploit. To get around it, if you’re buying a big-ticket item—say, five computer workstations for your small office—or even going in for a home loan, you might consider having a salesperson make a call at your home or your workplace. This way, you have the advantage of having chosen the field of battle, and stand a better chance of wearing down your opponent on familiar terrain.

In kind too. Just as valuable as the cash discounts you are able to extract are the value additions that you secure for free. For instance, when you’re shopping for a family car, you could persuade the dealer to throw in some extra fittings—upholstery, floormats and a burglar alarm—for free. Likewise, when you’re buying a high-end computer system, ask for a free webcam or free CDs or more bundled software.

Give and take
Artful negotiation is about giving an inch to take back a yard. When you’re close to clinching a deal, make allowance for and give a small concession, just so the seller can get the satisfaction of having aced you. Remember, this isn’t war, it’s also about having a pleasant shopping experience, which is worth a lot more than a few rupees, annas and paise. Look for a value deal, and once you get it, savour the moment.