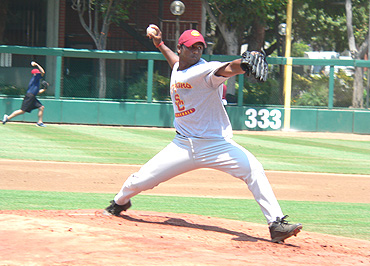 Dinesh Patel, who hails from the small village of Choppepur near Benares, had never seen a baseball before November 2007, when he chanced upon a newspaper ad for a reality show competition called 'The Million Dollar Arm'. It offered a prize money of Rs 4 crore. "I thought it was a joke—winning that much money just throwing a ball!" says Dinesh. But he decided to give it a shot.

"Thousands had come to compete in the Lucknow round," recalls Dinesh. But, used to fighting impossible odds, he was unfazed. Born in a poor family, with a mentally handicapped father who was unable to earn, Dinesh went to the village school, where he discovered he had a natural aptitude for javelin throwing. After school hours, he worked at his uncle's handloom shop, did odd jobs, and managed to scrape enough for the admission fee at the Guru Gobind Singh Sports College in Lucknow. He went on to win a national gold medal, but his skill brought him only certificates and no money. Dinesh then decided to join the army, but that was before he took part in the reality show competition at Lucknow. And here, he finally got his break—he became one of six people to qualify for the next round in Delhi.