Slender, sensuous, caressing, feminine, and not prone to costume anymore! 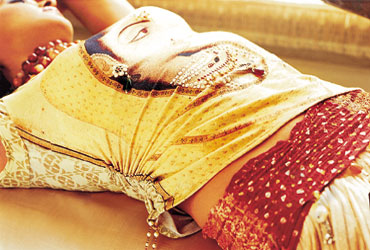 outlookindia.com
-0001-11-30T00:00:00+0553
What do women want? This must be the million-dollar question that every designer must ask himself at the start of a new collection. Will we ever know? I am not entirely sure because this fluid state is always evolving. It is perhaps best to just work from instinct. At the outset, however, I must clarify that I write in the context of the small sliver of women that I actually interact with.

It's almost farcical to think that one can generalise. Now as never before, we see women in burkhas jostling for world space with the Cavalli Jaising 'blonde' brigade. If ever there was diversity in this country, this certainly represents for me those very odd polarities. Very odd indeed! But, seriously, what do women want in their clothes? They want to be, at a basic level, decorous and warm if need be—this is where functional requirements end! So then and beyond, is it to feel sensual, seductive, to prove equality or liberation, to create an aura about themselves, to reaffirm their position in society, to enjoy the luxury of something beautifully crafted and fitted? In all fairness, they probably want a bit of all of the above, modulated by individual preferences.

Sometimes, while taking a bridal couture appointment, I marvel at the change in sensibilities wrought in this country during the last century. Granny sits there, her braid intact, in her crisply starched Kota Doria sari with nose rings and toe rings glittering away. Her daughter (mother of the bride) is in a machine-embroidered shirt loosely fitted with jeans but with an impenetrable bouffant, and, of course, six to eight rings and bracelets. Not modern nor traditional, a little unfathomable. And then there is the bride, the granddaughter of "Kota Doria", who more likely than not is in hipster distressed jeans with shin-fitted skivvy and terrifying platforms, discussing her costumes from the Royal India bridal look with me. So I am never quite sure what they want. What is the deal?

And then one of the fairest of them all, on her way to an ashram, sends me an SMS, putting the whole thing into perspective. She says: "So excited, feel I am about to reunite with my love? To love oneself is the beginning of a life-long romance." Out of this unrelated statement emerges for me the attitude with which the Modern Indian Woman, and certainly women in general, relate to clothes. It shows me how dress is beginning to be defined.

More than ever before women now have diverse choices—even from a single label as mine—to humour their many different moods. Mughal siren one day, pared down chikan separate with linen capris, vampy lycra jewel halter blouse with vibrant shaded chiffon to put any bird of paradise to shame the next. And the signature couture line from me of bridals and sari blouses that are extravagant and lush but delicious to the touch, and boned, cosseted, embroidered with structured drapes for maximum comfort. Clothes must enhance, redefine. Most importantly, women want to feel amazing!

Beyond that, it's personal. Less and less is grand-daughter bound by convention. She dresses like her generation, but there's the quirky details, windows to her upbringing: in the toe rings, joothies and other little things. She cannot or should not help it. She's Indian and this is Modern India.

Recently, I dressed Aishwarya Rai as part of an ongoing project being filmed on the Taj Mahal by Bharat Bala Productions. The brief—the modern Mumtaz Mahal, but not as some overdone, overworked reference of Mughal India. It was a modern interpretation of period costumes, as analogous to those of Queen Margot or in the wonderful Chinese film, The Emperor and the Assassin. So, instead of overdone zardozi, mirrors and dhabka work in jewel colours, we worked on a palette that was light, cool and 'Now'.Various shades of beige, jades in diaphanous textile and texture, as opposed to clothes that would weigh Ash down.

I was not sure when I got the brief that it would perhaps be too light, or seem too sophisticated. Monochrome instead of jewel palettes. Too severe. Too Modern. However, when we stepped out of the vanity van into the courtyards where the filming was proceeding, I noticed the look in people's eyes. Of course, Aishwarya's ethereal beauty enhanced the clothes wonderfully. But it was more than that. From a modern standpoint, even Mumtaz had been updated. And, suddenly in today's milieu, this was more in sync with the modern Indian woman. Slender, sensuous, caressing, feminine, and not prone to costume anymore! 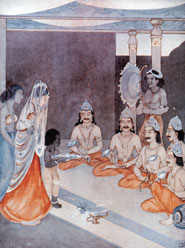