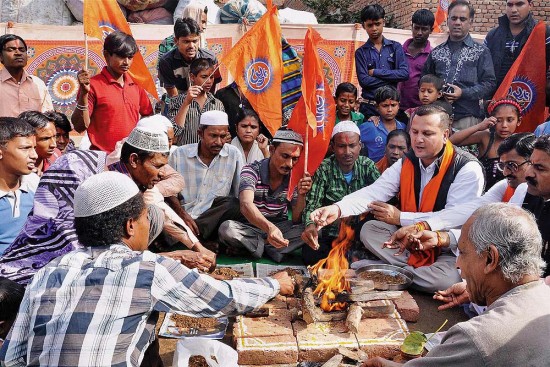 The NDA’s only Muslim woman cabinet member, it is rumoured, will be kicked up to a gubernatorial role, come 2015. The reason is two-part. She is perilously close to the cut-off age of 75 and, say sources in the BJP, “there’s Najmaji’s lack of performance in the six months as minister in charge.” Her junior in the ministry, MoS Mukhtar Abbas Naqvi, the only other Muslim face in the cabinet, brought in to balance out Heptulla’s apparent lack of initiative, is by his own admission, “too busy with parliamentary affairs”. Speaking to Outlook, he said, “I am too caught up with parliamentary affairs (a dual charge he holds) at the moment and haven’t had time to find out what all is happening in the minority affairs ministry. It will take me some time to find out all the details.”

Clearly then, Naqvi’s statements in Parliament on the forced conversions of minorities to Hinduism (57 families in Agra district), reportedly by the RSS, were far from satisfactory. When leaders from the BSP, Left, JD(U) and the Congress kicked up a storm in Parliament, demanding an explanation from Prime Minister Modi, Naqvi lamely advocated that the government had nothing to do with the conversions. Even as reports of more “ghar wapasis” (the ‘come home’ conversion programme for minorities planned by RSS-affiliated organisations and slated for Chr­ist­mas) did the rounds, both Heptulla and Naqvi were found lacking in reassurances to the minorities that their rights would be protected.