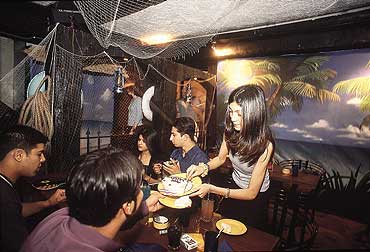 Is this water-starved Delhi’s answer to Goa’s beaches? Seems so, especially as it’s happening right in the height of summer. As the capital reels under the triple layer of heat, dust and political tension, many feel the best way to check the soaring mercury graph is to party. And with strong water content.

So Blues, a subsidiary of the Regent restaurant, has a fortnight-long beach theme with a set straight out of Goa. Accompanying the white sand, palms, fishing nets and bandana-sporting waiters are low-cost spirits, a live band and MTV lucky draws every evening. "Water’s something that’s always at a premium in Delhi. So we thought this would be an ideal way to get the crowds," says Blues owner Samir Chawla. Girish Sharma, whose rain dance in Samrat Hotel had 20 tankers and drew more than 1,500 for a show that continued for five long hours, agrees. Liquor giants Smirnoff and Seagrams are planning a series of theme parties throughout June while soft drinks major Pepsi has similar musical dates with school and college students. PepsiCo India spokesperson Deepak Jolly says it’s the cola giant’s answer to those who can’t afford a holiday to beat the heat. "We’re just trying to chill their lives," quips Jolly. And how.
Shantanu Guha ray

With A Dash Of Style

Always wanted to go to a Swiss finishing school but never quite made it? Here’s an easy alternative. Style Inc Media, who claim to be India’s first fashion styling company, has been conducting exclusive image consultancy workshops for multinationals and corporates, airlines, hotels and the travel and tourism industry. It has now decided to aim at the commoner. So on June 7 and 8, Delhi’s cultural adda, the India Habitat Centre, will turn the venue for an intensive workshop, aimed at training the ladies in the basics of makeup, haircare and styling. The moving force behind the venture is Jojo, India’s leading make-up artiste who has also done a stint in the Paris fashion circuit. He shares some of his tips on personal grooming, educates the initiates about the latest trends and helps them "enhance their image". Sounds like a good package deal indeed. Should you be in dire need of a makeover, now’s the time to just go for it.

When all that you are interested in are hard numbers, won’t a system that gives you access to more than a crore people daily be just too hot to handle? So now you know why all marketing men worth their mba degrees are zooming in on the Indian railways. The numbers are simply mindboggling: the New Delhi station alone handles 5,00,000 people every day. Now tell me, can there be anything better for hll, Britannia, Nestle, Timex, Citibank and Big Mac? If Timex is keen to set up kiosks at select high-traffic rail zones, Pizza Corner is already eyeing a take-away counter at the capital’s junction, aptly named Pizza Corner Express. Similarly, Nescafe is setting up vending machines on board Shatabdi Expresses. It suits perfectly with any strategy model. You get high brand visibility and greater recall and that, in marketing lingo, inevitably translates to improved bottomlines. Moreover, Citibank has kicked off its atms in the Delhi platforms and a pan-Indian model is also in the pipeline.
Arijit Burman

No more venturing out in the heat to buy tickets for your favourite movie only to be disappointed by the Houseful board. Seeing movies in Delhi turns more convenient and accessible with the launch of India’s first online, cross-locational ticketing network. ezeetickit is a unique product, a joint venture between IT&T and Tickets.com, world’s leading ticketing software and services company. The network will initially sell movie tickets through hi-tech booths and kiosks at strategic locations in the city and will eventually expand to other entertainment events like theatre, concerts, sporting events etc. "Infotech and entertainment are both sunrise industries and the potential to generate applicable synergies is immense," says Hemant Kohli, CEO, IT&T. The product is not just aimed at film buffs but theatre owners as well. "Being part of the network will offer them a competitive edge," says Karana Verma, COO, IT&T Entertainment Services (P) Ltd. The ezeetickit network plans to cover six cities, creating a network of 20-25 venues in each city. The network will also be backed by a website and a call centre.
Namrata Joshi

Summer’s normally a dull season for the fash frat. But two shows did enliven the Delhi ramp. Levi’s introduced its Summer of Desire range of fast and racy street wear, tie’n’dye tees, cool body bags, mobile pouches and floppy hats. J.J. Valaya presented his Spring-Summer 2001 collection at the Grand Hyatt. The show started off with a collection in red and ivory, inspired by the rose. The Butterfly series was made of fabric specially woven on the looms of Benaras. Pastels experimented with French knots, beads and crystals. Ming was a statement in blue and Greece celebrated the traditional, fine stitch. Valaya also showcased the garments he had earlier exhibited in Paris and culminated the evening with Trousseaux, his signature line of bridal attire.

When so many dead Indians have successfully lent their names to streets, airports and railway stations, the Mumbai Cricket Association (mca) fails even to name a stand in its Wankhede Stadium after living legend Sachin Tendulkar. The little master may not be embarrassed but the mca has been deservedly shame-faced about the whole affair. "After deciding to name the North Stand after Sachin, we discovered four blocks in the stand had been allotted to the Tatas," explains Prof Ratnagar Shetty, mca secretary. A plan to find another stand in the stadium to honour Sachin was put on hold. If this is how the mca honours its heroes, one dreads to think what they’d do to dishonour someone.
Manu Joseph

Yet another dropout who never let college interfere with his education, Bob Dylan turned 60 last week.And to remind the present generation of past and present legends, the Tata group decided to host a birthday bash in Mumbai’s Rangbhavan. The concert saw people like Louis Banks, Gary Lawyer, Suneeta Rao and Sophiya Haque, among others, paying him tribute. The organisers couldn’t confirm if there was a move to bring the singer himself down to Mumbai. However, one of them did point out: "Bob Dylan sent a mail saying he would have liked to be here but he wanted to spend his birthday by himself." While tributes to great men are welcome, the concert performed by lesser people mysteriously slashed the ticket prices to Rs 200 and Rs 100. Asked why, one official said cryptically: "It’s not what you think." What is it then?