Down To Mr One Per Cent

The people have spoken, even his PPP is fed up. The beginning of the end for Zardari? 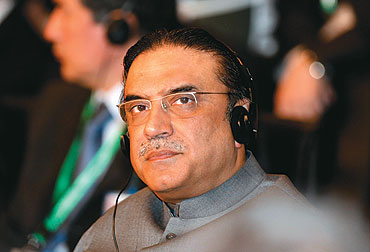 Looking out the window of President's House on Constitutional Avenue, President Asif Ali Zardari must have thought he was under attack. Massive steel barriers blocked all roads leading to Constitutional Avenue, security personnel were out in full force, and not a body out of uniform was visible. This was the road where the hordes marching from Lahore and other cities were to converge on March 16, demanding the reinstatement of Chief Justice Iftikhar Chaudhry, withdrawal of Governor's rule in Punjab, and removal of the ban on Pakistan Muslim League (N) leader Nawaz Sharif and his brother, Shahbaz, from contesting elections. The countrywide uproar, though, was also a direct expression of the mounting anger against Zardari's dictatorial tendencies.

For, like all dictators, he believed he could crush a people's movement with the state's might. Elderly women like human rights activist Tahira Abdullah were dragged from their beds and thrown behind bars. Popular TV channels were taken off the air. But, in the end, to stem the...