The general's speech betrayed no aggression this time More Coverage 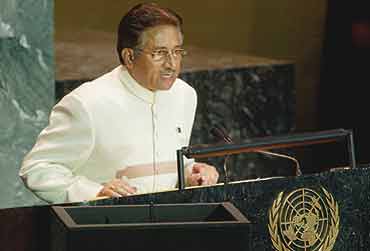 It appears that Musharraf was given a clear message through the back channel between Tariq Aziz and J.N. Dixit, the two national security advisors who are jetting around to secret locations to give momentum to the peace process, not to vitiate the atmosphere in New York. Or the meeting with Manmohan would be a "waste of time" and once again shove the atmospherics to the nadir of name-calling and breast-beating. The general read the message loud and clear and said Roger. A loud sigh of relief was heard at the New York Palace Hotel, where the senior Indians were encamped.

In addition, the Americans played a role in giving the general a push. They helped convince him of the need to seize the moment, focus on his western border and round up 'high-level targets' from Al Qaeda and keep the eastern border clean of terrorists walking around. In return for all the good deeds, the Americans would look the other way at his reluctance to change back into civilian clothes. His meeting with Bush was essentially a "confessional" about the uniform and a strategy session to make the Afghan elections successful.