Would the audience have had as good a time had the two heroes actually been gay and not merely posturing? 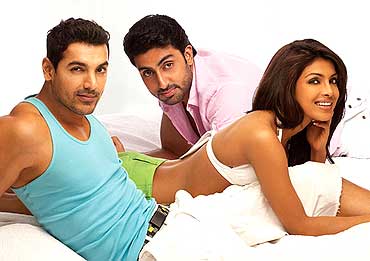 I didn’t go expecting a Happy Together or a Brokeback Mountain. What held promise for me was a song in Dostana—Maa da ladla bigad gaya—written by a relatively unheard of guy called Kumaar. The Punjabi lyrics play delightfully with gender roles and stereotypes (Munda saada doli chadh gaya, band baj gaya) to mirror our society’s perceptions and prejudices against gays. However, the film itself does not push the envelope enough, though it does boldly cast one of its heroes as a nurse, not a doctor, mind you.

The situation, of two men posing as gays, is similar to an atrocious Hollywood film, I Now Pronounce You Chuck and Larry, and the jokes trace their roots to the Kantaben episodes in Kal Ho Na Ho. Here John and Abhishek are forced to fib about their sexual orientation to be able to share Priyanka’s swanky Miami pad. Dostana is quite entertaining in its racy first half but leaves you confused in its tackling of the gay issue—it takes a small step forward and then retreats two huge ones.

It does stereotype gays. But then most other characters, be it the nit-wit aunt or hammy mom, are caricatures too. It cracks jokes at gays but simultaneously shows their acknowledgement in the mainstream, specially in the hilarious scene where Abhishek’s mother gingerly accepts John but doesn’t know how to define the relationship—damaad or bahu. It also left me wondering whether the audience would have had as good a time had the two heroes actually been gay and not merely posturing. The audience laughs at them, laughs with them, comfortable in the knowledge that the two aren’t really swinging the other way. The director is obviously confused. The second half dips badly and he resolves the mess with a senseless copout of a climax.

Dostana will also go down in history for the display of "come look at me" bodies. There’s Shilpa Shetty of course, and Priyanka in her micro mini attires. Then there’s John, in his D&G underwear slipping way below the waist, while the camera glides on his body lovingly. But the one who doesn’t have it, doesn’t flaunt it. Abhishek remains clothed, cracks naughty jokes and plays to the gallery in a role to chew on.