The colluding administrators should have the fear of an international, public trial. Genocide can't hide behind sovereignty. 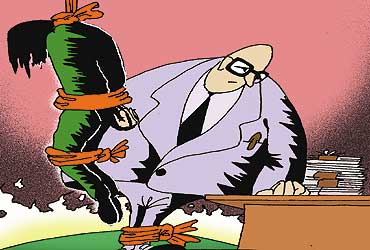 outlookindia.com
-0001-11-30T00:00:00+0553
In the winter of 1983, some of us in the Navy were posted to Kiel, Germany (then East), a city known as the home of the German U-boat fleet in the last war. As the cold weather closed in from the north we vacationed southwards and inevitably landed up at Belsen, the northern-most site of the concentration camps in the German homeland. It is unnecessary to reiterate the horrors of the place, but what I found most curious was: how did the Brown Shirts and the SS know where to look in each city to find the Jews? The answer is that in Germany—as in every other continental country—each family is registered with the municipal authorities, called the Ordnungs Amt. This office is kept informed whenever a family shifts residence. Originally designed to improve municipal administration and population statistics, these records became the source of information on Jewish families, who were then concentrated in a camp.

It appears that well before the Godhra outrage, Hindu fundamentalist outfits were similarly extracting municipal records, employment exchange registers, telephone-bill addresses, electoral rolls and even a public relations firm's business list to compile a dossier of Muslim residential addresses. Could this be true? There is little doubt that the state police and the IB are fully aware whether these allegations are either true or false. If they are true, there is no question that both the Gujarat government and the Union home ministry also knew the first steps towards replicating the 'Night of the Long Knives' by the Brown Shirts had begun in Gujarat. The IB's reporting chain leads it to the home secretary. There is also no reason why such information should be kept classified and denied to the people, unless the Union agency is part of the conspiracy—which takes me back to Belsen.

People leave Belsen in cold shocked rage. This rage is often seen in the erratic driving of cars coming out of Belsen. Every person has his private vision of horror. My preoccupation was what were the thousands of people, who knew about the plans to eliminate the Jews, thinking? Today we know that they buried their heads in the sand, ostrich-like, and didn't want to ask questions—why were the SS collecting lists of Jewish addresses? Or why were so many Jews disembarking from cattle wagons and what was being burnt behind the barbed wire that gave rise to a sickly smell each night? Didn't thousands of people in Ahmedabad know whether Muslim addresses were being collected? Didn't, at least, dozens of good, sound, secular-minded IB officers know? Will they speak up? Because if they don't, what will eventually happen is that the Union home ministry will perhaps single-handedly break up this country.

Since large numbers of educated people have expressed their feelings in the press and said that Godhra and the post-Godhra 'riots' were two sides of the same coin, it is necessary to point out the extreme dissimilarities. To us in the military, the definition of a riot is clear. It's created by mobs, which are large masses of men with no discriminating impulses. This is the reason why when the time comes to open fire, the killing of one or two leaders causes the mob to panic and disperse. Collecting lists of intended victims identified on the basis of religion, carrying LPG cylinders to cut open safes of Muslim business houses and training people to create LPG explosions without blowing themselves up are clear indications of premeditated genocide. Establishing that is absolutely necessary for the arguments which follow.

Genocide can rarely be investigated by state organs, because they have complicity in the killing process. The government should know this better than anyone else, since India was one of the prime movers of the Convention on Genocide enacted by the General Assembly in 1948.What the convention attempted to state was that the sovereignty of states committing genocide could be trampled upon, if that is the only way in which the people can be protected from the state. Can a judicial commission instituted by the Gujarat government indict itself for genocide? Hardly likely. In the outpouring of revulsion against the killings, most of the ire has been directed against the politicians and the Hindu fundamentalist organisations. If the intention is to prevent the recurrence of such a carnage, this ire is misplaced. The target should be the servants of the Gujarat government whose inaction amounted to complicity.

There have been any number of large-scale communal riots in India in the past 150 years. The Indian government machinery that deals with riots is time-tested and robust. But it collapsed in Gujarat because the bureaucrats and the police conspired with the politicians. Barbaric mobs and venal politicians are part of the Indian scene, but the first act of rehabilitation is to threaten the errant government servants with worse consequences than what the Gujarati politician is capable of inflicting. That can only happen through threats of a public international trial. The Gujarat government servants' misconduct is no different from that of the two Rwandan nuns being tried in Belgium for complicity in genocide—they refused sanctuary to fugitives who were later massacred. Rwandan sovereignty was superseded to bring the nuns to trial, although their guilt seems less than that of the station house officer, Naroda police station.