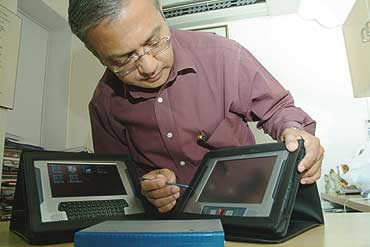 outlookindia.com
-0001-11-30T00:00:00+0553
Hospital wards where nurses move around with chic electronic notebooks instead of sheets mounted on hardboards to take down doctors’ instructions and patients’ complaints. Market research personnel knock at your door and ask you to tick questions on their ultra-mod notebooks that look almost like an extended personal digital assistant (PDA). These are likely situations conjured up when Mobilis was designed and developed by Encore Software.

It fits in between a PDA and a laptop, overcoming the constraints of both: screen size of the former and weight of the latter. At just 750 gm, Mobilis can be carried like a notebook to serve basic computing needs, especially in areas like sales force automation, healthcare, e-governance and education. At the lowest end is Sofcomp, a compact CPU that performs the basic function of a computer and can be attached to a regular monitor, keyboard and mouse. The second variant, Mobilis, has a 7.4-inch VGA LCD and a carrying case that opens up as a desktop stand with a roll-up keyboard. Then there’s Mobilis Wireless with a built-in GPS receiver and a wireless modem, features vital for disaster management.

With built-in support for several Indian languages, provision for upgrades, and a battery life of six to seven hours, Encore’s idea is to take services to the doorstep, literally. It has found markets in the home automation and education sector in the US. In India, it’s working with several solution providers.