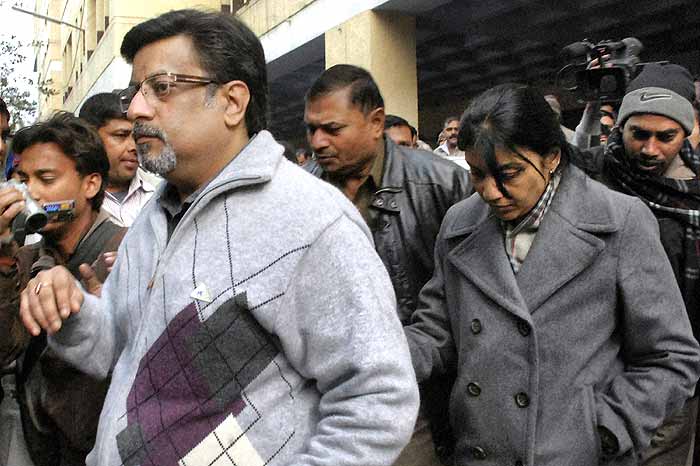 Two murders, 30 months of investigation, but no answers:

The closure report filed by the Central Bureau of Investigation (CBI) in the Aarushi-Hemraj double murder case has created public outrage, raised questions about an outdated police and, worst of all, not really brought the case to even a semblance of closure. Some are shocked that the agency, which could not marshal enough evidence to obtain a conviction, nevertheless chose to highlight in its report that the prime suspect was Dr Rajesh Talwar, father of the teenaged girl who was one of the victims.

In fact, there are some who ask why the CBI—which took over the case from the Uttar Pradesh police on June 1, 2008—had not filed a chargesheet against Talwar if it thought it fit to so highlight his name in the closure report. This is a bizarre instance of long-winded but shoddy casework—involving 30 months of investigation, including the use of lie detectors, narco tests and brain mapping—coming to naught.

The double murder case has been shrouded in mystery from day one. Aarushi, 14, the daughter of dentist-couple Rajesh and Nupur Talwar, was found with her throat slit in the bedroom of her Noida home on the night of May 15, 2008. The Uttar Pradesh police began investigations and initial suspicion fell on Hemraj, a 45-year-old Nepalese domestic help of the Talwars who was missing. A day later, his body was found on the terrace of the Talwars’ residence. There were bloodstains on the stairs leading to the terrace—which the police team missed or ignored during initial inspection of the crime scene. Then, the Talwars’ compounder, Krishna, and their neighbour’s domestic help, Raj Kumar, were taken into custody.

However, on May 23, Rajesh was arrested for the double murder. After 50 days in jail, he was released on bail. A day before that, on July 11, another neighbour’s help, Vijay Mandal, was arrested. In between, the UP police, which had come under fire for shoddy investigation and character assassination of the victims, was withdrawn from the case and the CBI took over. It spent two and a half fruitless years on it.

Investigation by the UP police was shoddy to begin with. Then the CBI takes 30 months to say it has no answers.

But was the CBI right in filing such a closure report? “I think it’s a bit self-contradictory,” says K.T.S. Tulsi, a senior advocate at the Supreme Court. “On the one hand, the CBI arrives at the firm conclusion that there was no entry of intruders in the house that night. It also concludes the servants are innocent. Yet it does not chargesheet the two people—Rajesh and Nupur—who were there with the two persons who have been murdered.” He says a chargesheet can be filed if there is a strong suspicion about someone’s involvement: proof isn’t required for filing a chargesheet; proof is what the court will decide during trial, with the onus for explaining what happened that night resting on Aarushi’s parents, under Section 106 of the IPC.

“Merely saying they were asleep when the murders took place isn’t enough,” Tulsi says. “The CBI report also says the crime scene was not only dressed up, there’s evidence Hemraj’s body was dragged up from the ground floor to the terrace. Dead bodies do not walk. So it’s a bit surprising that the investigating officer thinks it isn’t sufficient evidence.”

Pinki Anand, another Supreme Court lawyer, has a different opinion. “It was heartening to see that no chargesheet was filed against the domestic helps. Very often, a chargesheet is filed and a trial is held only for the accused to be acquitted. So it is good the CBI didn’t unnecessarily chargesheet them. As far as the parents are concerned, the agency is free to investigate them. A closure report doesn’t mean the case can’t be further investigated. Also, the involvement of the Talwars in the case is debatable. Whether they could have been proceeded against is something that the court will definitely consider.”

Joginder Singh, a former director of the CBI, opines that the agency shouldn’t have pointedly named Talwar as a suspect when it did not have enough evidence. “I feel the CBI could have avoided naming Rajesh Talwar in the conclusion of the closure report. It should have definitely mentioned it in the findings, and indicated it in the document, but there was no need to highlight it. I feel there’s need to investigate the case further. However, I also feel some crucial evidence has been lost. It’s difficult to believe that a body on the terrace of a house where another murder took place was found after two days.”

Anand supports this view: “It appears as if there was chemical cleaning of the crime scene and I am surprised no action has been taken against the officers who first came to investigate. They left the house open for days: people could roam around and no proper investigation was done in the initial stages.”

The CBI, too, has criticised the Uttar Pradesh police: it says almost 90 per cent of evidence was lost before the agency was called in. But its own work in the case, especially the tenor of the closure report, is far from professional: though the murder weapon or weapons have not been recovered and though it has not arrived at a motive for the murders, it says it has reason to suspect Rajesh.

Drawing conclusions minus evidence against Talwar is unfair, says Sidharth Dave, a Supreme Court lawyer. “Either the CBI should have investigated and concluded who committed the crime or it should have just filed a closure report. Because to say that Rajesh ‘may’ have committed the crime and then to add that it doesn’t have more evidence against him is blatantly wrong.”

Last Monday, the special court in Ghaziabad observed that the CBI had shown “undue haste” in filing the closure report and also rejected Talwar’s protest petition for the time being, saying it was premature. Legal experts point out that Talwar should have waited to file the petition after the court sent him a notice on its final ruling on the closure report. Perhaps the court was approached to deflect media attention.

As the hearing in the CBI special court continued on January 7, legal experts say the judge, Preeti Singh, has three options before her. She can accept the report and close the case. Reject it and direct the CBI to continue investigations. Or she can reject the report, take cognisance of the case and available evidence, and summon the accused. That would perhaps mean another long-drawn legal battle for Rajesh Talwar.

A Lahore Boy In Delhi