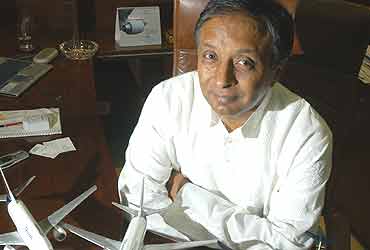 outlookindia.com
-0001-11-30T00:00:00+0553
He might quote Mahatma Gandhi, read the Vedas and wear khadi. But Ronojoy "Rono" Dutta considers himself a global citizen. The new chief of Air Sahara, better known as the former president of United Airlines, doesn’t like it when people describe him as ‘the second Indian to head an American airline’ (the first was US Airways boss Rakesh Gangwal) or a ‘Bengali in the United cockpit’. "People laugh at my Bengali because I speak a Bangladeshi version and they laugh at my Hindi accent too," says Dutta. He landed in Delhi only three weeks ago, but already loves the city. Dutta’s appointment is quite a coup for the Sahara group, since his CV can give any global high-flier a complex. He wears his success lightly, like his white embroidered kurta-pyjama. "I think I am going to wear this stuff more often," he says when his media consultant divulges that the outfit was chosen for his meeting with Outlook.

Schooling at St Edmund’s, Shillong; B Tech from IIT Kharagpur; a few years at Voltas; Harvard Business School, in 1980; first job in the US with consulting firm Booz Allen Hamilton. In 1985, he joined United Airlines and rose to be president in 1999. "United was the best thing that happened to me," says Dutta. Till September 11, 2001, when he helplessly watched one of his planes crash into the World Trade Center, and another one go down in Pennsylvania with passengers fighting the terrorists. "I cried that night," he says. And he made sure that United called up the families of all the victims.

The two years after 9/11 were the toughest for any airline. In the case of United, which Dutta says was anyway going bankrupt, it was a nightmare. "It was hard as the president to realise that our business model no longer worked." Finally, in December 2002, the airline filed for bankruptcy and Dutta was forced to quit after it notched up losses of over $2.1 billion. In reality, 9/11 was just the final straw; a few months before the tragedy, Dutta had suggested strict cost-cutting measures that were vehemently opposed by the strong labour union. Dutta knew then that the end was near. His friend and a senior at IIT, Vimal Mohindra, recalls how Dutta stopped enjoying his job: "He had been driving the airline forward but the nature of the job changed. Bailouts didn’t excite him."

Post United, he turned consultant and advised private equity fund Cerberus Capital Management on its investment in Air Canada and another pension fund in its acquisition of US Airways. But all this while he was plotting his way back to India. "After I left United I was looking for a new experience. Joining another airline in the US would have been much the same thing," he muses. Dutta was also going through an inner turmoil that he needed to resolve. "As a child I have been disturbed by questions about poverty, India’s subjugated past and I went to the West to find answers. Historically, western thinkers had embarked on an external journey, while those on the banks of the Ganges had an inner quest. I needed to synthesise the East and the West, two complementing yet conflicting forces in my mind," says Dutta. He had experienced the external journey in the US, and now wanted to explore his inner space.

Dutta, say friends, has always been an unlikely corporate warrior, in his belief that means are more important than the end. "I was told to play corporate politics, I was told I won’t make it if I didn’t. I was also told that I should not carry my own bags. I don’t want any of the corporate flash." How one got there is more important than what he got. And he definitely doesn’t want to be seen as an exception or as a symbol of India’s success abroad. "Who the hell wants to be talked of as one of the two guys who made it? For far too long, Indians have not played a role on the world stage. It’s high time we did."

"Rono always had an India bug. He brought United to India in the 1990s," says Mohindra". Whenever he visited India he spent a lot of time with aviation experts because he was concerned about the aviation industry here, it was not just a competitive thing for him." Now that he’s back, he wants to enrich Air Sahara with his learnings. And he has started with a bang by slashing apex fares on certain sectors by 30 per cent and taking the battle right to the enemy camp. But he denies that he is taking on anyone. "By cutting fares I am only targeting the highly price-sensitive leisure traveller who was staying away."

The new Air Sahara chief agrees that cost-cutting—in maintenance, distribution and fleet ownership—will be an important ingredient in his overall strategy. The entry of low-cost airlines like Air Deccan and others poised to start operations soon will pose a challenge for the large private airlines. So Dutta’s appointment is timely. "With the arrival of low-cost airlines as well with domestic airlines flying abroad in the near future, someone with the skills to run an international network was needed and that’s what Dutta brings," feels Kapil Kaul, senior vice-president, Centre for Asia Pacific Aviation.

More important, his stature in the global airline business could help influence future aviation policies in India. High government charges on domestic airlines need to come down dramatically, he says: globally, they constitute 15-20 per cent of costs, but in India it’s 35-40 per cent. To counter low-cost airlines, Dutta also wants the government to provide a level playing field. "For example, it’s mandatory for domestic airlines to fly certain less viable routes; even low-cost ones should be asked to do that. Both have to play by the same rules." His final goal, however, is to make Air Sahara a world-class airline. Because India deserves one. "Why can’t we create a Lufthansa in India?"

At 53, Dutta is far from a spent force. And the journey that began in Shillong, a place he calls home even after living in Chicago with his wife and three children for nearly two decades, is unlikely to end in Delhi. For, he is also pursuing a personal dream. He remembers a teacher at St Edmund’s, Brother McMann, who taught him maths. "One day he said he’d talked enough of geometry and algebra, let’s talk of something more important and wrote the word ‘character’ on the blackboard. This he said was the most important thing in life," Dutta recalls. He was then in class six and even though he never met McMann after leaving school, the words stuck with him. Three years ago, he received a newsletter from his school extolling his success and there he read a small obituary of McMann. "I felt he was talking to me from his grave."

A Masjid For Sajida