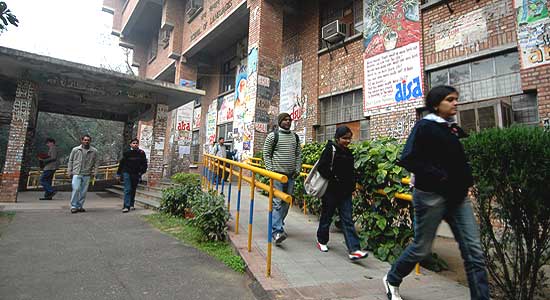 Delhi’s Jawaharlal Nehru University is often at the vanguard of issues deemed liberal, progressive  and politically correct. So when an institution like it takes the unprecedented step of opposing the constitutional provision providing for reservation of Scheduled Castes and Scheduled Tribes and the physically handicapped on its academic faculty, it is bound to raise both questions and eyebrows.

In what might shock many liberals, 30 professors on the academic council wrote to vice-chancellor B.B. Bhattacharya on November 25 last year, expressing strong opposition to the said quota. In language that smacks of elitism, the professors raise concerns about how JNU would lose its academic sheen if reservation was allowed at the level of professors. Their concern was aroused by an advertisement put out by the varsity for 149 faculty positions, over half of which are reserved at the level of professor and associate professor for SC/ST candidates.

Incidentally, the said positions under quota comprise the 22.5 per cent reservation mandated in the Constitution. Furthermore, a resolution to implement this was passed in 2007 by the executive council (EC) of JNU—its supreme decision-making body—as per UGC guidelines. Yet, the academic council said: “This new step, which is not legally binding on JNU, has been taken without consultation with the faculty.... Considering that this has very serious implications for the long-term academic development of this premier university, we suggest the EC reconsider the decision.”

This letter was sought to be discussed in the executive council meeting held on January 11. The topic, though not on the meeting’s main agenda, figured  “under any other item”. Most academic council members present were in favour of scrapping the provision for reservation. Sources say EC member and former JNU student P. Sainath cautioned the academic council against challenging a constitutional provision.

“OBC reservation was debated at length. How come quotas in the academic faculty is not debated at all?”
Mridula Mukherjee, Director, NMML

The signatories to the academic council letter comprise the venerable heads of departments of JNU. The list includes Aditya Mukherjee, director of the Institute of Advanced Study, Kamal Mitra Chenoy, incharge, Group of Comparative Politics and Political Thought, and Professor Pralay Kanungo, director, Centre for Study of Discrimination and Exclusion. Others on the council who signed include Mridula Mukherjee, director, Nehru Memorial Museum and Library, and former VC Yogendra Alagh. All expressed concern on the serious implications of the decision to reserve higher posts in the academic faculty.

Lending their support to the academic council, a formidable number of former vice-chancellors and professors wrote to the chairman of the EC. The letter written by the likes of P.N. Srivastava, Asis Datta, Y.K. Alagh and former professors Bipan Chandra, Yogendra Singh, C.P. Bhambri, T.K. Oommen and Tapas Majumdar read as follows: “If steps are taken which prevent it from remaining one of the premier centres of excellence (which is what we fear will happen by limiting, through reservation, the scope of selecting the best faculty at the senior professor and associate professor levels), the chief victim will be the disadvantaged sections of Indian society. If JNU declines, the well-to-do will move to foreign and private universities, and the disadvantaged will no longer be able to get world-class education.....”

“I support reservation. But the university act says changes in posts are to be discussed with the academic council.”
Kamal Mitra Chenoy, Former president, JNUTA

The manner in which the debate was initiated and conducted came as a surprise to some faculty members, who cautioned the council that the move would amount to challenging a constitutional provision that aims at the inclusion of the most discriminated sections of society.

Former VC Yogendra Alagh, currently vice-chairman of the Sardar Patel Institute, Ahmedabad, says, “JNU tries to meet the formula prescribed by the government but doesn’t follow it mechanically. We don’t believe that at every level of recruitment a required percentage of candidates need to be represented. At the same time, we were, and are, very conscious about the inclusion of underprivileged candidates. It is for this reason that we worked out a system of deprivation points to enable deserving people from far-flung areas to come to the campus.” Alagh says JNU was once rated among the top 100 universities in the world. “There is a minimal standard that needs to be followed if the university aspires to be a world-class one,” he says.

“There has to be a minimal standard to be observed if JNU is to continue as a world-class university.”
Y.K. Alagh, Former vice-chancellor

JNU sources say the decision to implement reservation or not is not the preserve of the academic council. Says Y.S. Alone,  assistant professor, School of Art and Aesthetics: “It is an executive order as mandated in the Constitution and no one, let alone the academic council, can challenge it. Reservation is done by executive order, and so it is with JNU, when the EC supported it in 2007. An academic body cannot question it merely on the grounds that the provision is not binding on the university.”

As per the constitutional provisions, 22.5 per cent posts should be reserved for each level of the academic faculty. But, since 2007, no vacancies at the level of professor and associate professors have been filled up in this category, though the university took the decision to reserve posts way back in 1983. According to officials in the administration, there are around 27 SC/ST assistant professors in the faculty and many of them have come without the aid of reservation, yet the university shows their names  in the reserved category.

And while the university may have worked out a mechanism to address the reservation for students,  the academic council’s hostile stand apropos reservation for faculty positions is being seen as open defiance of an important constitutional provision.

‘I Am Not Someone Who Can Be Manipulated By Anybody’