'DMK Was Never Anti-Hindi, Only Against Its Imposition'

Touted the new face of DMK, the Communications Minister, in the news for both good and bad reasons, sets the record straight in a free-wheeling interview 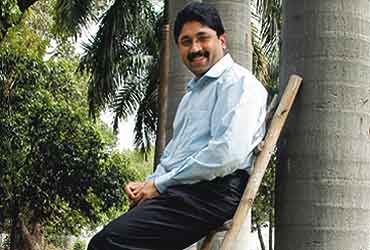 Ever since cable TV entrepreneur Dayanidhi Maran, 37, was chosen to step into his late father DMK leader Murasoli Maran's shoes, his life has been in constant fast-forward mode. Having played a key role in forging the DMK's pre-poll alliance with the Congress and now bestowed with the key portfolios of communications (including telecom) and IT in the UPA government, he has been in the news for both good and bad reasons. Critics talk about a clash of interest between his earlier avatar as the CEO of family-owned Sumangali Cable Vision, a part of the Sun TV group and a dominant cable service provider in Tamil Nadu, and his current one. His supporters tout him as the new face of DMK, a young, dynamic technocrat who can transform India's communications scenario. In a free-wheeling interview, Maran sets the record straight.

Is there a clash between your interests as a minister and a businessman?
There is no clash of interest. I'm no longer a businessman.

So, as long as you're a minister, you'll have no direct contact with companies owned and managed by your family?
No, I will not.

What is your stand on the conditional access system (CAS), launched by Sumangali Cable in Chennai?
I should not be asked this question. My ministry has nothing to do with it. The matter lies with the i&b ministry.

When did you first meet Sonia Gandhi?
I first met her only after the alliance had been formed. But I had been in touch with her on the phone.