Most attacks in India have been fidayeen, not suicide missions. But both are deadly. 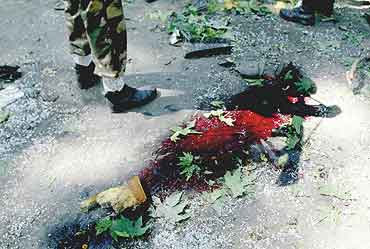 outlookindia.com
-0001-11-30T00:00:00+0553
The distinction between the fidayeen and the suicide bomber is extremely fine. The fidayeen does not believe in exploding himself to instantaneous death. His philosophy, though, condones death by martyrdom: he fights till the end, often launching attacks in situations where his death is inevitable. Fidayeen is the deadly variant of the suicide bomber in India's context, particularly Kashmir's. The typical suicide bomber is a rare phenomenon in India; instances of fidayeen, though, abound.

The first suicide bomber to explode on the Indian scene was in May 1991. Dhanu, a Jaffna Tamil woman, blew herself up to assassinate Indian prime minister Rajiv Gandhi. Dhanu's act was an isolated phenomenon. For years, India didn't experience the passion of those who kill themselves to kill others.

The cult of fidayeen first emerged on July 13, 1999, months before Pakistan retreated following its Kargil invasion. Three militants, under cover of darkness, entered the sector HQ of the BSF in Bandipore. They killed three BSF personnel, including a dig. All died in the ensuing night-long firefight.

Since then, fidayeen attacks have been occurring at the average rate of 15 a year, aimed at inflicting casualty on security forces in Kashmir. Government sources familiar with the modus operandi of the fidayeen say the attackers ritually shave themselves chest downwards upto their knees (armpits included), wear new undergarments, shoes and perfume before they set out on their last mission of their lives.

The decision to become a fidayeen is usually voluntary. There's no monetary benefit, only the promise of a better hereafter involving, among other things, the promise of joys only 72 heavenly virgins can provide in Paradise. In the bargain, they believe they leave behind, through their sacrifice, a slightly better world for their brethren. During the preparation for the mission they are told that this is a temporary life, one that ends with shahadat (sacrifice) they are to make for reducing the number of kafirs (infidels) and kufr (things generally un-Islamic).

The fidayeen's profile is remarkably different from the suicide bomber elsewhere in the world. Mostly in the age group of 16 and 27 years, he's desperately poor, hasn't completed school and is jobless. He also harbours a sense of anger against perceived injustices in Kashmir, a sentiment which his trainer methodically fans during the process of indoctrination. Unlike Palestinian bombers, no videos are made of him delivering his last testament. Nor is he, like his LTTE counterpart, bestowed with the honour of sharing a meal with the supreme leader. 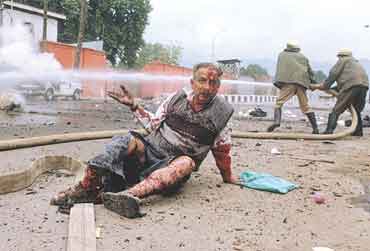 The bulk of fidayeen attacks in India has been organised by the Lashkar-e-Toiba, which views suicide bombing as un-Islamic. Fidayeen is its innovation, a way out to fight, kill and die without flouting the Quranic injunction against suicide (see 'Commit Not Suicide'). By contrast, Jaish-e-Mohammed endorses suicidal bombing in jehad. Once a group of fidayeen are infiltrated into India, the local commander in Kashmir takes over. The commander is told who among the group is a fidayeen and who isn't. The fidayeen is deployed soon after the infiltration, rarely beyond six months after arrival. They have to be deployed quickly in order to ensure that they don't get killed in unplanned encounters with security forces. Also, the longer they are in Kashmir, the greater the chances of their getting demotivated.

Demotivation occurs when the fidayeen finds the situation in Kashmir at variance with what he was taught in Pakistan. There, a grim picture of religious persecution in India is portrayed to them.They are told that Muslims are not allowed to pray in mosques, that muezzin are prevented from giving a call to the faithful (aazan), that Indian forces enter mosques wearing shoes, routinely desecrate the Quran during searches and rape Kashmiri women. Fired by these tales of injustice, the recruit is willing to die in an act of retribution against the kafirs.

The most damaging of fidayeen attacks occurred in the Tanda military camp, near Akhnoor, on July 22, 2003. Three fidayeen entered through the main gate. One was killed immediately, another some distance inside. The third one was wounded in the firefight, but he took advantage of the confusion to take refuge in tall grass. A cursory check later, the army gave an all-clear signal, despite police intercepts suggesting that at least one fidayeen hadn't been accounted for.

Soon, at the camp arrived lieutenant generals, brigadiers, and sundry others, gathering near the spot where the fidayeen was hiding. He had bled too excessively to even muster strength to lift his gun. Around his waist was a belt of grenades. He took one out, pulled the pin and let it roll to where the officers were. In the blast that followed the fidayeen died, as did a brigadier; another brigadier, one major-general, two lieutenant generals sustained splinter injuries. 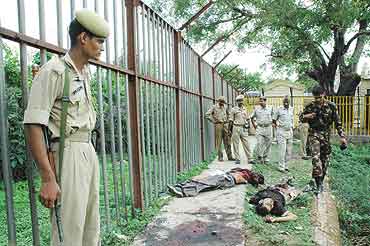 Government sources say a study conducted in 2004 showed that out of the 86 fidayeen attacks till then, about 68 had occurred in the Valley. Three quarters of these attacks were the handiwork of Jaish and Lashkar. Hizbul Mujahideen, the J&K Islamic Front and the Harkat ul-Mujahideen accounted for the rest. By 2004, 140 fidayeen had died in various operations. For every 1.5 fidayeen killed, three security personnel sacrificed their lives. Sources say the ratio is getting progressively worse for the fidayeen.

For long, Pakistan has been fomenting terrorism in India. But the jehadi monster has now begun to hunt for his prey at home itself. And he prefers to target his enemies in Pakistan not through fidayeen attacks, but through blowing himself up. Suicide bombing has been sparked in Pakistan because of its support to America's war against terror, and the formidable reach Osama bin Laden's Al Qaeda has there.

Post-9/11, as many as 20 human bombs have exploded themselves in Pakistan, killing over 200 people. Most belonged to the splinter groups of jehadi or sectarian organisations launched in the wake of the crackdown on militants post-9/11. Like the fidayeen who come to India, the Pakistani suicide bomber is poor, illiterate, and unemployed. He perceives the American military actions in Iraq and Afghanistan as hostile acts of the forces of evil against the Muslim world. Of the 20 attackers, 12 were aged between 15-25, five between 25-30 and the remaining three above 30. Not even one of them was a matriculate.

Pakistani intelligence sources say that most of these human bombs had participated in the 'holy wars' in Afghanistan and j&k, and who were desperate to win a one-way ticket to heaven. The suicide bomber is often a brainwashed religious-minded militant who has been spotted by a jehadi leader, usually with the help of a cleric at a mosque or madrassa. The sources say that the suicide bomber operates in small cells because larger groups have been thrown into disarray by persistent government crackdown after President Musharraf and Premier Shaukat Aziz were targeted by them.

It was Jaish which introduced suicide missions to its Pakistani cadres. Its first successful suicide operation was against India in end-2000, when 24-year-old Bilal, a Muslim from Birmingham, rammed his explosives-laden car into the 15 Corps headquarters at Badami Bagh cantonment in Srinagar, killing nine people. The first instance of suicide bombing in Pakistan was of Sarfraz Ahmad. He blew himself up on March 17, 2002, inside Islamabad's Protestant International Church.A member of Jaish-e-Mohammed's splinter group, Jamaatul Furqaan, Sarfraz was only 20 and came from a poor family in Attock. He owed his allegiance to Maulana Abdul Jabbar, who developed differences with Jaish's founder, Maulana Masood Azhar, as he had instructed his cadres to not attack American interests in Pakistan.

Again, on August 5, 2002, three Jaish activists—Mohammad Nawaz, Muhammad Zareen, and Rehan Badar—attacked the Murree Christian School. Surrounded by the security agencies, they blew themselves up to evade arrest. Unemployed, all three were below 20 years—and belonged to lower middle class families. Their motivation was their desire to avenge America's military actions against Muslims worldwide. Unable to target the Americans, they thought Christians were adequate substitutes.

Perhaps the most sensational bombing was by Mohammad Jameel and Khalique Ahmed, who rammed their explosive-laden cars into General Pervez Musharraf's cavalcade on December 25, 2003. Jameel, 26, was a staunch follower of Jaish chief Maulana Azhar. A resident of the Rawla Kot area in Pakistan-administered Kashmir, he had spent his youth in religious seminaries. Khalique, 25, was considered close to the Harkatul chief, Saifullah Akhtar, at the time he was the Taliban chief Mullah Omar's special advisor.

Should the Indo-Pak peace process gather momentum, fidayeen attacks or suicide bombings could get a fresh fillip.

There Is No One Prototype