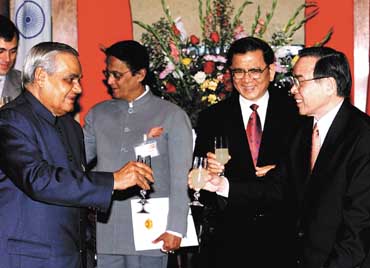 Now, as India seeks to remedy that situation, the primary task is to assure the region that New Delhi is, at long last, firmly committed to developing enduring relations. In the past, Indian policy-makers failed to foresee the importance of Southeast Asia, so much so that when some members of the proposed asean (Association of Southeast Asian Nations) grouping informally extended feelers to India to join up in the '60s, India declined. The assiduous Indian pursuit of asean (comprising Brunei, Malaysia, Singapore, Cambodia, Myanmar, Thailand, Indonesia, the Philippines, Vietnam and Laos) now contrasts with the earlier dismissive stance, perhaps more so because Southeast Asia is a new growth area.

Vajpayee's choice of wooing Vietnam in this Look East Policy is not without its own significance. Earlier, in February 1979, when Vajpayee was visiting China as foreign minister, and had in fact retreated to the scenic locale of Hang Zhou, China invaded Vietnam. In a show of displeasure, Vajpayee promptly cut short his trip and returned to Delhi. The idea was to show solidarity with Vietnam which itself had invaded Cambodia to overthrow the Pol Pot regime the previous December. After the fall of the Janata government, Indira Gandhi indicated that Delhi would be willing to recognise the new Vietnam-backed government in Cambodia. Opposed to the spread of communism, asean made clear its displeasure over the proposed Indian move. The cruellest cut came in July 1980, when the then foreign minister P.V. Narasimha Rao was travelling in the region to attend an asean conference and explore the possibility of making India a dialogue partner. Rao and the asean members learnt that India had extended recognition to Cambodia. The only other nations which had recognised Cambodia till then were the ussr, Cuba and, obviously, Vietnam. Delhi, thus, at one stroke alienated both China and asean, and Rao had to cut short his trip and return home.